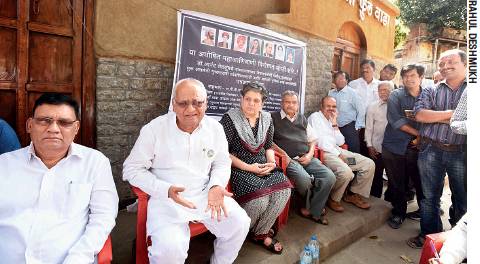 Ask why then will he be arrested, see the move as purely an attempt to silence intellectuals and offer their support to keep him from being taken into custody

The all-round support for Anand Teltumbde, management professional-turnedcivil rights activist, against the move by Pune police to arrest him in connection with Elgaar Parishad, has gathered momentum. While the faculty of Indian Institute of Management (IIM), Ahmedabad, have spoken up for their esteemed alumni, activists in the city, came together, on Monday, to announce their backing to ensure he does not get arrested. In fact, they questioned the premise for booking him in the case, pointing out that rather than being involved in the contentious event, he had criticised the organisers for distorting the history of Bhima Koregaon.

At a media interaction held at Mahatma Phule wada in Ganj peth, the individuals claimed that there was an undeclared emergency in India and professor Teltumbde was being targeted for his dissenting views in the form of critical writings against the establishment. Local policemen and from the Special Branch (SB) were also present at the event.

Justice Kolse Patil said that as the country is moving towards 2019, civil rights and democratic rights are being curbed with impunity by way of dictatorship. “Professor Anand Teltumbde is being harassed and targeted for his dissenting views according to the Gujarat laboratory experiment at the behest of Minister Narendra Modi and party president Amit Shah. We have not met Teltumbde so far and he has no connection whatsoever with Elgar Parishad. However, his name has been included in the investigation as a conspiracy and it baffles us. We have filed a bail application before the lower court seeking Teltumbde’s release, but we are sure that it will not be granted. He has no role in Elgar Parishad and injustice is being meted out to him which prompted us to take up his case. Dalit activist Sudhir Dhawale, all the other activists arrested in the case are not connected with the Elgar Parishad in any way,” he said

Sable said that intellectuals were being harassed in the name of cultural nationalism by uncontrolled Hindutva organisations under directions from their mother organisation in the aftermath of the Elgar Parishad. “Some of the organisers have been branded as Naxalites while some of the arrested activists don’t have any connection with the Elgar Parishad, but are still behind the bars. Since the past one year, retired judges, human rights activists and constitutional experts have raised voice against the undeclared emergency. Teltumbde is a renowned intellectual. A Naxalism related false story has been created on the basis of a first information report by Tushar Damgude and a fact finding report of Vivek Vichar Manch. Teltumbde is being hounded under false charges based on this story,” Sable alleged.

Gupte said that right-wing forces have been let loose and it is the duty of the state government to provide justice to the citizens. “This is beginning of the end of freedom of speech and there is a possibility of India becoming a Hindu Rashtra (nation) in 2023-2024 and we will not allow it to happen,” she said.

Professor Vilas Wagh said that Teltumbde is an intellectual connected with the Ambedkarite movement and has written a number of books like Republic of Caste: Thinking Equality in the Time of Neoliberal Hindutva, these books inform the masses about caste issues. “The government finds intellectuals to be a threat and it is easy to target leftist individuals like him,” he said. Additional director general of police Uddhav Kamble (retd), said, “Teltumbe has been critical of the state and the present action is a culmination of his intellectual dissent.” Film-maker Anand Patwardhan also spoke on the occasion.

The Supreme Court on January 14 refused to quash the Pune police’s FIR against civil rights activist and Indian Institute of Management alumnus professor Anand Teltumbde for his alleged link with Maoists. Teltumbde has been booked along with other activists for allegedly plotting the assassination of Prime Minister Narendra Modi and inciting mob violence at Bhima Koregaon on January 1, 2018. The SC said that Teltumbde could seek regular bail from the trial court in the meantime and extended the interim protection from the arrest granted to Teltumbde by the Bombay High Court by four weeks.

Mahad: The Making of the First Dalit Revolt

The Persistence of Caste: The Khairlanji Murders and India’s Hidden Apartheid

In his address, Kolse Patil, who was one of the organisers of Elgaar Parishad, noted, “Out of the people booked by the cops, the only person who was involved in the organisation of Elgaar Parishad is Sudhir Dhawale. I had not heard of or knew any of the other11people except him. I cannot understand how the cops have managed to connect their names in this case and have booked them? Teltumbde was, in fact, also against our ideology and the stand of Elgaar. Yet, he has to face a threat of going to jail. This is an attempt to supress voices and I am sure that none of the charges will be proved. They will only be kept in jail till the elections are over.”

Having put the current dispensation’s intent in the case under scanner, Gupte worried, “These people might get acquitted later but they will lose valuable time and reputation in this process. They will continue to face questions through their life. It is the responsibility of this government to protect the right to dissent. Freedom of speech and expression is under threat and if this continues I fear that by 2024 a Hindu constitution will come into existence.”

Airing similar concerns, retired Supreme Court judge, PB Sawant observed, “The country is facing undeclared emergency. Writers, artists, intellectuals and journalists are all being silenced one way or the other. A few are also being sent to jail. Protecting people like Teltumbde is increasingly becoming difficult.”

Vilas Wagh of Sugawa Prakashan, who has published many of Teltumbde’s books said, “Having handled his work, I can say that none of them had any affinity for the Naxal ideologue. The government is feeling threatened by intellectuals and hence trying to supress them.”

Patwardhan, who crusaded against religious fundamentalism, wondered, “Teltumbde had criticised politicisation of Bhima Koregaon and Elgaar. But do the cops even read anything?”