The brother of Kafeel Khan, the doctor who was jailed in connection with child deaths in Uttar Pradesh Chief Minister Yogi Adityanath’s home base Gorakhpur, was shot at last night in the town.

Around 11 pm on Sunday, men on a motorcycle allegedly fired at Kashif Jameel, who is a businessman, and fled. The shooting took place just half a km from Yogi Adityanath’s home.

“I am very shocked that this incident has happened just 500 metres away from the Gorakhnath temple, which is the home of the UP Chief Minister,” Dr Khan said.

The 34-year-old was taken to a private nursing home. Dr Khan told the media that a bullet was lodged in his brother’s neck and he had to arrange for an emergency surgery to get it removed.

No motive was found behind the shooting of Dr Khan’s brother said police sources. 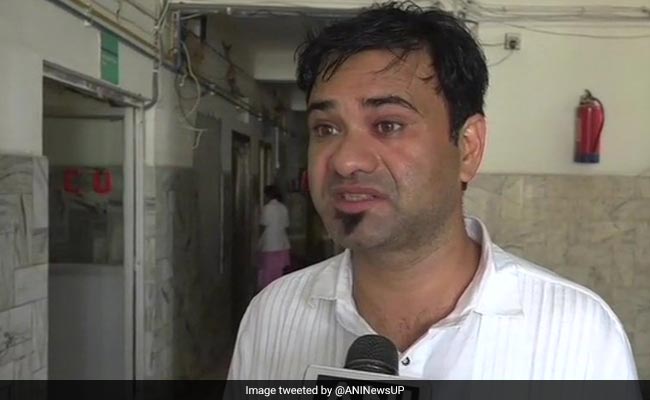 Kashif is now under observation for another 48 hours at the private nursing home, the doctors said.
Hours after the shooting, Gujarat lawmaker Jignesh Mevani targeted the state’s BJP government. Mr Mevani tweeted “Dr Kafeel saved children when Yogi Adityanath government had no money to pay for oxygen. He was put behind bars. Now his brother is shot at. Thank you so much Modi ji for what your ‘acche din’ are offering us – hate speeches, violence, bloodshed and bullets.”

On April 25, Dr Khan was released on bail from the Allahabad High Court after eight months in jail. The court said there was no direct evidence of negligence on his part.

More than 60 children, mostly infants, had died at BRD hospital in Gorakhpur within a week in August, 2017. There were allegations that the deaths occurred due to disruption in oxygen supply. The BJP-led Uttar Pradesh government, however, had denied that shortage of oxygen led to the deaths.

Dr Khan was in charge of the pediatrics wing and had arranged oxygen cylinders from a private hospital. But he was removed and arrested on charges of negligence. His family insists he was made a scapegoat.

Kafeel had recently expressed his willingness to serve in Kerala which is under the grip of the Nipah virus. His request was also accepted by Chief Minister Pinarayi Vijayan.

The incident takes place at a time when Uttar Pradesh Chief Minister Yogi Adityanath is also in Gorakhpur.

The police have registered a case against unknown people and the matter is being investigated.