Dreams from Japan, in the bylanes of Okhla

By Iqra Raza for Twocircles.net

New Delhi: The rickshaw wheels lazily on the bumpy road making me jump every now and then. Dragging on, slower than the tired yet blazing sun, it is taking me deeper into the labyrinth of houses in Noor Nagar, a small colony in Okhla, in East Delhi constituency.

I am headed towards Aseem Asha Foundation to meet the girls behind the Sadako Peace Campaign: Adiba Saifi and her cousin, Farhana Saifi. Having seen some of their paintings, I’m impressed by their ingenuity much before I marvel at their philosophy that carry strong political understatements. 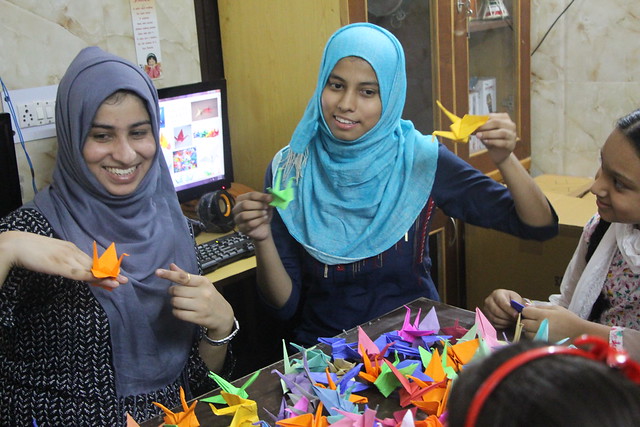 Before I meet the girls, Aseem Asha Usman, founder of the non-government, non-commercial organisation, Aseem Asha Foundation, the group behind this campaign gives me a brief background of their work. As he’s acquainting me with details, the booming voice of a vegetable vendor interrupts him and he obliges by politely telling him that he is at work. By then, a burqa clad Adiba Saifi enters, greets me and sits down next to me.

“Adeeba came here looking for a good tuition centre. But I wanted to teach, or rather share my experiences with them through the medium of art because art is ignored,” Usman says. 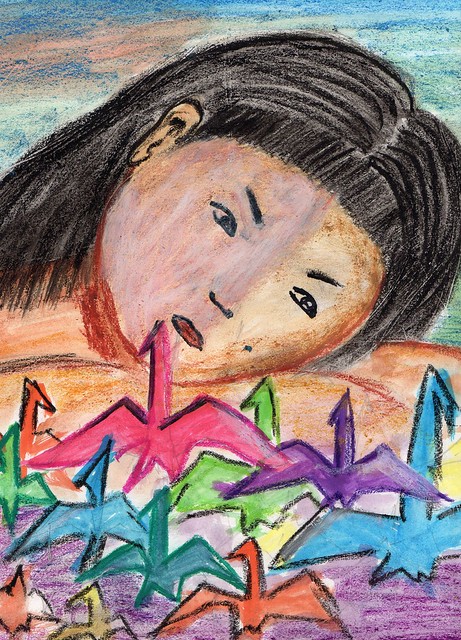 Coming from an underprivileged family, Adiba learnt the nuances of painting with Farhana and others under the tutelage of Mr Usman. Five years, and she is ready to showcase 25 of her water colour paintings – which narrate the story of a child victim of the Hiroshima bombing, Sadako Sasaki- in an exhibition at the Japan Foundation that marks 71 years of the bombings that destroyed a vast number of lives and still continues to affect a million more both emotionally as well as physically.

“Most of my paintings revolve around women-oriented themes. I come from a household where I have seen women being oppressed. This irks me. I know I can’t do much. So, I paint. I want to give out a message as well as inspire women,” says Adiba. Hailing from a conservative family, initially it was difficult for her to come to the Foundation or give sustenance to her imagination which even took the form of Hindu Godesses. 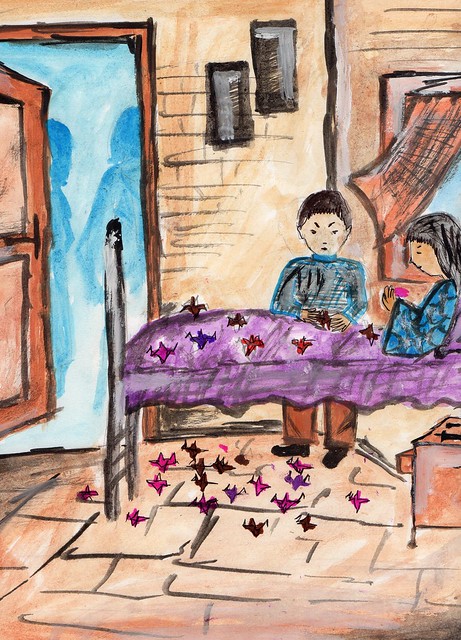 While Adiba’s parents are supportive, Farhana Saifi, who will also display five of her paintings at the same exhibition, isn’t as lucky as her cousin. “My brother doesn’t want me to come here. Often, I have to put up a fight or resort to more subtle forms of defiance like shedding tears to convince him. Because even within the confines of the four walls of this Foundation, I have a sense of freedom that isn’t there back home.”

Farhana also joined five years ago and has learnt a lot since then. “Earlier, I used to paint only cartoons. And now, I’m portraying loss and pain! It’s a big jump. I have evolved. From using extremely bright colours, I have come to use darker shades and more water. Seems more realistic,” Farhana says referring to her recent paintings that portray the destruction caused by the bombings.

“We want to spread the message of peace through the medium of art because it has a better relatability factor. Paintings make you think and feel and empathise instantly. There are nuances involved. For example, we never draw straight lines because our lines represent lives and lives are never straight lines. We live in each one of our paintings.” Farhana says when asked about the relevance of painting as a medium to send out a message. 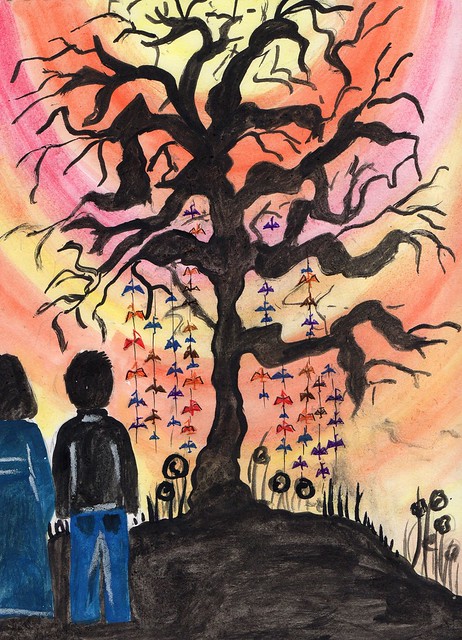 “We love to tell the story behind it. People are curious to know,” says Adiba.
Asked about how publicity has affected them, Adiba says

“I see a resurgence of hope within me. The hope I had thought would die. Before we came to Aseem Sir, we had accepted our fate as women of a particular community. Now, all my paintings proudly proclaim me as a woman. They all have women figures.”

After an hour of talking to the girls, as I retrace my steps home, I hope that the reality of the society they are a part of, doesn’t impinge upon their ambitious dreams.

(Paintings by Adiba Saifi and Farhana Saifi will be displayed at The Japan Foundation, Lajpat Nagar on 9 Aug 2016 as part of the Sadako Peace Campaign.)

UN adopts resolution against sex abuse by peacekeepers #Vaw
Gujarat horror: 70 year old found dead on the sidewalk, was admitted in hospital for COVID
IT rules strike at my right to 'privacy': TM Krishna moves Madras HC
Let us have the right to live, say Joginis #Vaw