The factory from where Nodeep Kaur was arrested, Sharan Elecmech Pvt Ltd, is involved in sheet metal fabrication and employs over 50 people. It is located on plot number 349 in Phase IV of Kundli’s Sector 57.

BEFORE SHE became known as a labour rights activist, following her arrest in Haryana on January 12, Nodeep Kaur (24) — now at the centre of an international campaign for her release — just wanted to complete her education. After finishing her Class 12 in 2018, she wanted to enrol for BA (Punjabi) at Delhi University (DU), but started working to support her family — her father and mother are labourers, and she has three sisters.

After working at a telecalling company in Delhi for some time, Kaur joined a mask manufacturing unit in Kundli, in Sonepat district of Haryana, in July last year. In October, she moved to a glass manufacturing unit in the area. It was around this time that Kaur began her association with the Mazdoor Adhikar Sangathan, a local labour rights organisation.

But her sister, Rajveer (26), traces Kaur’s fight for Dalit and labour rights to their childhood. “Fighting against anything wrong” was ingrained in them, she says. According to her, eight years ago, their mother, a farm labourer, led a fight to get justice for a Dalit girl who was gangraped by upper caste men in their village in Muktsar district of Punjab. After the men were convicted, she says, the villagers’ hostility forced them to move to Telangana.

In Telangana, Kaur’s father got a job at a workshop. It was only in 2019 that the women returned to Punjab, while Kaur’s father stayed back, returning for only a few months during the lockdown.

The move to Telangana led to an interruption in Kaur’s education, her relatives say. She could not go to a government school due to the language barrier, so Kaur completed her Class 12 through ‘Open School’. 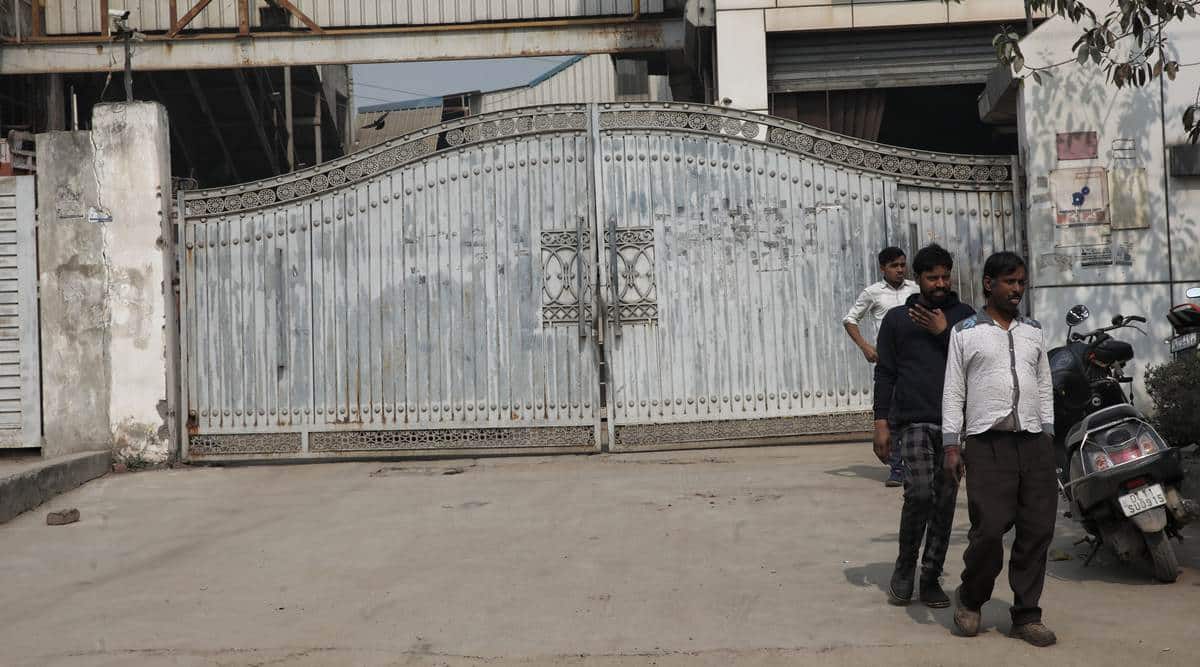 The factory in Kundli, where Nodeep Kaur protested. (Express photo by Abhinav Saha)

“Women have been more vocal and active in our family; our mother always spoke out against wrong and we learned from her… This led Nodeep to join the Sangathan. She knew the working conditions at the factories — lack of implementation of labour laws and the difference in wages of men and women for the same work,” says Rajveer, who is pursuing her PhD from DU.

While the Sangathan has been active since 2016, it gained prominence during the lockdown as it took up the cause of workers whose wages were due. On November 30, days after protesting farmers arrived at the border, the Sangathan pitched a tent on the highway in Singhu, at a chowk located between the Kondli Industrial Area and slums which are home to migrant workers.

“The tent was pitched strategically to establish contact with workers. Gradually, the registration of complaints on non-payment of wages by factory owners grew,” says a Sangathan member. An employee at a footwear company in Kondli says that after the Sangathan took up their cause, many workers received part of their overdue wages.

In December last year, Kaur’s associates say, she gravitated towards the farmers’ protest at Singhu border, convinced that the new farm laws would affect marginalised labourers too. According to her family, Kaur led around 2,000 labourers to the protest site and also addressed the crowd.

Her association with the protest, though, came at a cost, says Rajveer. Kaur lost her job at the glass unit the same month. Weeks later, on January 12, she was arrested. She faces three FIRs in Haryana. The charges against her include rioting, unlawful assembly, obstructing public servant in discharge of public functions, voluntarily causing hurt, voluntarily causing hurt to deter public servant from his duty, assault or criminal force to deter public servant from discharge of his duty, snatching, house trespass, extortion, criminal intimidation, and attempt to murder.

While Kaur has been granted bail in two of the three FIRs, her case has caught the attention of not just activists in the country but also of many abroad — Meena Harris, niece of US Vice-President Kamala Harris, has called for her release, while Labour MP Tanmanjeet Singh Dhesi recently brought up her arrest in the British Parliament. Back home, the Shiromani Akali Dal, which broke ties with the BJP last year, is pushing to help her secure bail in the third case too.

There are two versions on what transpired on January 12 — that of the police, and that of Kaur’s family and colleagues. The factory from where Kaur was arrested, Sharan Elecmech Pvt Ltd, is involved in sheet metal fabrication and employs over 50 people. It is located on plot number 349 in Phase IV of Kundli’s Sector 57.

Two complaints have been filed against Kaur over this incident — by the SHO of Kundli police station and by an accountant at the factory. Both claim Kaur and her associates tried to break into the factory and extort money from staff there, and physically assaulted the police team that tried to intervene.

The complaint by the SHO states that the police team came across “2-3 girls and 40-60 boys” at the factory, who were armed with sticks and shouting slogans. While Kaur was arrested from the spot, another Sangathan member, Shiv Kumar, was arrested on January 16.

Lalit Khurana, the factory accountant, reiterates the allegations, claiming that the group came to the factory around 11 am and demanded money. Speaking to The Indian Express, he says: “We did not know who the people were… We closed the gate but eventually had to call the police because the situation was becoming tense.”

Kaur’s family and colleagues say the protest was peaceful, and the group had gone to demand the wages of a worker who had not been paid.

The third FIR against Kaur is related to an incident on December 28. The complaint was filed by Shamsher, an employee with a private security agency that patrols the Kundli Industrial Area, who said the incident occurred at plot number 367 in Kundli’s Phase 4. A visit to the site, however, revealed only an under-construction factory, with the labourers and staff at adjoining factories saying they were unaware of a confrontation between police and workers or union members in the last few months.

Since Kaur’s arrest, there have been allegations of custodial torture and assault. Here, too, two versions exist. “I met my sister and she told me the police assaulted her in custody,” alleges Rajveer.

Police in Sonepat deny the charge, saying that Kaur was kept in the ladies’ waiting room “for the entire time and was accompanied by two female police personnel for the entire duration of her stay”. They say that she was taken to the Civil Hospital after her arrest, where she underwent a “general medical examination” and a “special medical examination by a lady doctor… where she herself gave a written statement… that she doesn’t want to be medically examined as she had not been assaulted”.

Police say that “she did not disclose/ mention anything about any assault by police officials” to the Chief Judicial Magistrate, before whom she was presented prior to being taken to Karnal jail.

A medical examination was conducted last week, and Kaur’s lawyers received the report on Monday. “The report says there were no indications of sexual assault, but two main injuries were found — one on her left thigh and the other on her buttock,” says Jatinder Kumar, her lawyer.

With a lower court rejecting Kaur’s bail in the case filed on the SHO’s complaint, her family is now approaching the Punjab and Haryana High Court. “We have already initiated an application regarding the matter in the High Court. We will not rest until she is released, she is innocent,” says Rajveer.