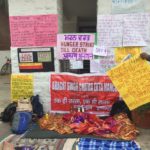 Following are the facts that would highlight the course of events leading to the exposure of the anti-student character of DU administration:

These events clearly show that the assurance was a tactic to break the students’ unity formed around the hunger strike.

This administration believes it can break the spirit of unity of students through such under-handed tactics, ensure that any and all voices of dissent are crushed and the democratic spirit of students is destroyed. It is up to us to show through our actions, through our resolve, with the unity they so fear that we will not bow down, we will not give up and we will continue to fight for our rights as students.

We remember the words of Bhagat Singh and Paash, we will not let our dreams die.

# India-The murder of a Dalit girl and the silence over it #Vaw
Why Facial Recognition Technology Is A Human Rights Concern
CRPF IGP says fake encounter in Assam by Army, police, his force
Media women unsatisfied with sexual harassment redressal mechanisms in their workplaces