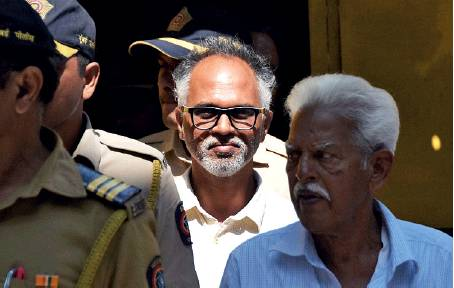 To be transferred to Taloja jail from Arthur Road and Byculla prisons; Arun Ferreira and Surendra Gadling want copies of seized digital evidence

Days after the Pune police handed over the probe in the Elgar Parishad case to the National Investigation Agency (NIA), a special NIA court on Friday extended the judicial custody of nine arrested activists until March 13. Earlier this month, the central government had transferred the case to the NIA after the newly formed Maharashtra government expressed its desire to reinvestigate it.

The case against the activists is with regard to their alleged speeches made at the Elgar Parishad conclave on December 31, 2017, just a day before violence erupted near the Bhima-Koregaon war memorial. The activists were arrested on the charges of waging war against the nation, spreading the ideology of the banned Maoist organisation and causing disaffection. They have denied the allegations.

This was the activists’ first appearance before the NIA court after they were transferred to the Arthur Road and Byculla jails from the Yerawada central prison in Pune on February 26. The activists will now be transferred to Taloja jail.

On Friday, Ferreira informed the NIA court that he had space in his cell at Yerawada jail to store his personal books and copies of two chargesheets – one running in 5,000 pages and the other has 3,000 pages – but no space at the Arthur Road jail.

Ferreira and Gadling informed the court that they have also filed an application for bit-stream copies of the hard drives seized from them by the Pune police. A bit-stream copy (or a mirror image backup) is a bit-bybit copy of the original storage device.

Legal procedure dictates that the original device must not be used by the authorities in any way, except to create a clone. Only the cloned bitstream image may be copied, followed by a forensic examination. Any modifications made to the original device would amount to tampering of evidence.

Gadling, Gonsalves and Ferreira informed the court that they would represent themselves in the case as they are lawyers by profession. Special NIA judge DE Kothalikar stated that the remaining activists would be produced via videoconferencing for the next hearing, until the court disposes of pending applications.

Gadling requested Judge Kothalikar for the status of the case. To this, special public prosecutor Namdev Taralgatti, appearing for the NIA, responded by saying that the Pune police had framed “draft charges” against the 19 of the 23 accused persons (including the nine activists) in the case.

The Pune police had booked all the accused on charges of sedition, which the NIA dropped after the case was transferred.

Mirror was unable to confirm the NIA’s future course of action.

KKNPP: Shoddy Parts and Shabby Leaders
#India - The richest 1% own 48.7% of the country’s wealth #WTFnews
Dance of death in Vidarbha
RTI Reveals ‘Missing File’ a Common Ruse in Health Ministry To Save Dubious Pharma Companies