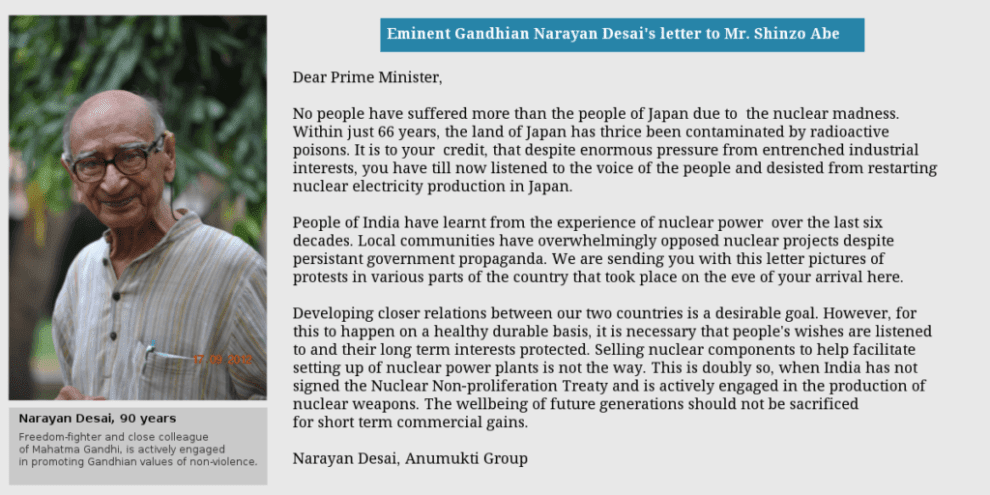 Eminent Gandhian Narayan Desai’s letter to Japanese PM. He forwarded our the pictures of protests in India to Mr. Shinzo Abe:

No people have suffered more than the people of Japan due to the nuclear madness. Within just 66 years, the land of Japan has thrice been contaminated by radioactive poisons. It is to your credit, that despite enormous pressure from entrenched industrial interests, you have till now listened to the voice of the people and desisted from restarting nuclear electricity production in Japan.

People of India have learnt from the experience of nuclear power over the last six decades. Local communities have overwhelmingly opposed nuclear projects despite persistant government propaganda. We are sending you with this letter pictures of protests in various parts of the country that took place on the eve of your arrival here.

Developing closer relations between our two countries is a desirable goal. However, for this to happen on a healthy durable basis, it is necessary that people’s wishes are listened to and their long term interests protected. Selling nuclear components to help facilitate setting up of nuclear power plants is not the way. This is doubly so, when India has not signed the Nuclear Non-proliferation Treaty and is actively engaged in the production of nuclear weapons. The wellbeing of future generations should not be sacrificed for short term commercial gains.