Enviornmental Activist Piyush Manush arrested, he was against expansion of Salem airport #DefendDissent 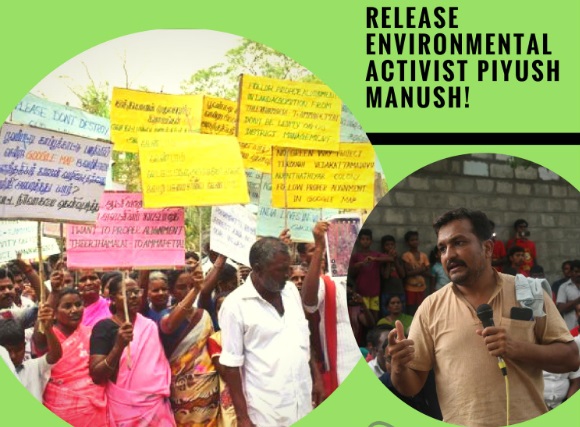 Piyush Mnaush friend and activiwas vocal with his protest against the expansion of the Salem airport as well as plans for the proposed 8 lane highway between Salem and Chennai.

A day after actor Mansoor Ali Khan was detained by the Salem police in Chennai, Salem- based environmental activist Piyush Manush was arrested on Monday evening.

Piyush Manush has been protesting the expansion of the Salem airport as well as the proposed eight-lane Chennai-Salem expressway.

Piyush’s family informed that  he was picked up at 8pm and for four hours no one could communciate with him, his mobile was swicthed off,  he was prodiuced before the magistrate at 1.00am, deliberately .. as they did not want protests for his arrest . He has been send to policu custody for 15 days and we will be moning for Bail.

A few days ago, a lawyer named Manikandan had approached the TN DGP with a complaint against Piyush and alleged that the activist was inviting people against developmental projects.

Piyush had brought Mansoor Ali Khan to Salem to speak to villagers and had registered his protest through a Facebook post against the actor’s arrest.

Salem police arrests Manzoor Ali Khan, who cleaned our lake, planted trees, donated money for lake restoration, spoke in support of the people to be affected by projects of 8 way lane and airport expansion..

Crimes are taken up seriously it seems by tn police..

A video in which Piyush had spoken about against the airport expansion project had drawn criticism from supporters of the project.

Over the past few weeks, the proposed project has been facing stiff resistance from farmers and residents in the villages along the highway.

Speaking to reporters after visiting the area on Saturday, Mansoor Ali Khan said, “I came to Salem to see the water bodies filled with water. If Salem gets an airport, 8-lane highway etc, people can’t live in Salem. If the 8-lane road comes, then many trees and hills will be destroyed. It will affect the livelihood of the people who live here. Hence, the state and the central government must not implement it. Moreover, if there are protests against the highway, I will definitely participate. If the eight-lane project is implemented, then I will kill eight people and go to jail.”

Police said actor Mansoor Ali Khan made a provocative speech in Thumbipadi, Pottiyapuram and Sikkanampatti villages on May 3, threatening to attack officials if they took steps for acquiring farm lands for the eight-lane project. Since Mr. Piyush had taken the actor to these villages, the Theevattipatti police registered case against him as well as against the actor.

The corridor essentially involves an eight-lane highway, connecting the two cities via Krishnagiri, Tiruvannamalai and Kancheepuram.

Farmers of Poolavari, Nilavarapatti, Naazhikkalpatti, Kuppanur and Achankuttapatti villages have already expressed concern with locals from the last village even reportedly blocking Revenue Department officials from surveying the land that had to be acquired.

Tamil Nadu Chief Minister K. Palaniswami stated in the Assembly that the state government had fought for this project and claimed that only 41 acres of forest land would be acquired. He also added that of the 1,900 hectares of land being acquired, 400 hectares belong to the government. He assured that the project would take the form of a tunnel when it passes through forest areas.

Farmers, whose land will be acquired to implement the Rs 10,000-crore Chennai-Salem Greenfield Corridor, are opposing the project fearing a loss of livelihood, threat to the ecosystem and measly compensation offered by the government which a section of them claim is well below the market rate

Farmers in Dharmapuri, Salem and Tiruvannamalai started protesting the project from May when the terms for land acquisition with details of survey numbers of land to be acquired were notified under the Land Acquisition Act of 2013. Recently, more than 500 farmers, environmental activists, advocates and locals protested demanding the central government to withdraw the project. A separate forum was also formed to protest against this project called “Pasumai yettu Vazhi Saalai Yethirpu Kuzhu” (Anti- committee for eight lane green corridor).

Piyush Manush was earlier arrested in July 2016 for trying to stop work on a bridge at Muluvadi gate in Salem. He was detained under non-bailable sections for many days.

Airport is a much needed infra but can it come at the cost of thousands of people fending for themselves from the land and contributing productively to the community.

For 30 years since the Salem airport came into being people who gave lands in 1989 are grappling to get a decent compensation and the court case has dragged for three decades.

Now the govt wants to expand the airport which after so many is seeing one aircraft running half empty..

Why this folly is the question.. Salems desertification needs to stop.