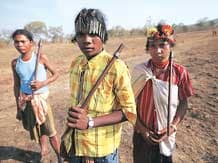 The environment ministry wrote to the tribal affairs ministry in December last year, claiming that the specific provisions of the Forest Rights Act (FRA) that give the veto power to tribals over the use of forestland is limited to national parks and sanctuaries. In order to “safeguard the welfare” of tribals, the environment ministry, which so far had been talking of diluting the rights of tribals, said the law should be amended to provide tribals such veto rights over all kinds of forestlands and not just these special wildlife zones. For this, they asked the tribal affairs ministry bring in an amendment to the Act in Parliament.

Business Standard reviewed the correspondence between the two ministries on the matter.

It did not take the tribal affairs ministry too long to shoot down the proposal rather tersely, saying there was no need to amend the law. Instead, it said to help the tribals get their rights, the environment ministry should stop forcible evictions of tribals from national parks and sanctuaries in violation of the Act.

A senior official commenting on the exchange between the two ministries said, “The tribal affairs ministry has consistently held the view that the need for consent from the gram sabhas is required in all forestlands, where tribals have their rights. The specific provisions that the environment ministry refers to in these departmental orders are additional safeguards that protect rights of tribals in areas under the Wildlife Protection Act and for exceptional circumstances where co-existence between wildlife and people living there is not possible.” Accepting the environment ministry’s idea even in principle would require the tribal affairs ministry to accept that tribal veto powers do not hold over forest areas beyond the special wildlife zones – completely contrary to the point it has made several times over last nine months.

The director general of forests, the highest serving forest service officer in the environment ministry, while writing the departmental orders to the tribal affairs ministry took the techno-legal ground that the specific provisions of the law enshrined in section 4(2) of the FRA only applied to areas identified as critical wildlife areas – zones where wildlife conservation takes priority. He told the tribal affairs secretary in his letter that the law should be amended to do two things. One, do away with identification of critical wildlife areas under the FRA and two, imposing the provisions of section 4(2) over all the forests. This, he claimed would provide “strong” provisions of the law to all forests. But accepting this formulation, tribal affairs ministry assessed, would mean implicitly accepting that tribals do not hold the powers of veto over diversion of all traditional forestlands at the moment and that this could be done only through an amendment to law.

The tribal affairs ministry, on the contrary, has so far contended that the veto power is held by tribal gram sabhas without the possibility of any exception and if the government wishes to change this it should seek a legislative amendment and not just reinterpret the law through executive orders.

It is the environment ministry, with the approval of the prime minister’s office (PMO), which has been seeking dilution of these veto powers through another series of correspondence and meetings in the PMO. It has drawn up a new set of executive orders just recently to practically do away with the consent requirements for most projects. The proposal too has been opposed by the tribal affairs ministry but the matter now lies with the law ministry to move on with the approval of the PMO.

Gujarat is reeling under drought. Why won't the state govt admit it?
Vaccines Get Past Taliban, Finally #goodnews #pakistan
International Womens Day- Statement on alarming trends in Negotiations of UN Document
Prof G N Saibaba pens a poem after meeting his mother in Jail