EIA Public hearing: NPCIL asked to do the homework well

No to Mithi Virdi nuclear power park – Over 5,000 women and men from 24 villages walked out from an illegal act staged in the name of environemntal public hearing by the district administration of Bhavnagar, Gujarat seeking peoples approval for construction of the Gujarat Nuclear Power Park (GNPP) in villages of Mithi Virdi and Jaspara, on 5th March 2013. The Government of India had decided to import 6 Westinghouse-Toshiba’s AP1000 (AP= Advanced Passive) reactors from USA as part of the Indo-US Nuclear Deal signed by Dr Manmohan Singh and George B Bush in 2005. The communities did not know any thing about that deal, but they came to know about the decision to locate those reactors in their villages on the coast of the Gulf of Khambhat in Saurashtra, when NPCIL started drilling operations in the community owned pasture-land in 2006. The drilling operation was terminated and the Nuclear Power Corporation of India Ltd (NPCIL) and its agents were out-lawed by people. 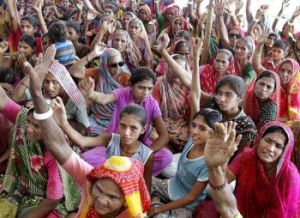 NPCIL had contracted the Engineers India Ltd (EIL) to write the environmental impact assessment report for the project. EIL sub-contracted the work to the Pragathi Labs and Consultant Private Limited (PCPL), Secunderabad, Indomer Hydraulics Ltd, Chennai (both private companies), the National Remote Sensing Centre of the Anna University Chennai and the Salim Ali Centre for Ornithology and Natural History (SACON). Their 2 volume report of 800 pages was posted on the NPCIL website on 5th Feb 2013, alongwith the announcement of the public hearing to be held on 5th March, 2013. The Gram Bachao Samithi (Save the Village Commitee) spearheading the movement against the project approached the environmental groups to study the EIA and provide a critique. Accordingly, the Paryavaran Suraksha Samithi (PSS) a Gujarat based environmental organisation and members of the PMANE Expert group (People’s Movement Against Nuclear Energy, Tamil Nadu) started working on this.

The village committee requested the District Collector of Bhavnagar to allow their experts to depose at the public hearing. Sarpanches /their representatives Shakti Singh, Jaspara, Dharmendra Singh, Mandva, Hira Bhai, Mithi Virdi and Prithwiraj Singh, Khadarpur and Lakhdhir Singh, Paniyali – and Bharat Bhai and Yuvaraj Singh from Uthan – an NGO working on women and water issues presented a memorandum to Mr VP Patel, the District Collector stating that EIL did not have an accredition for writing EIA for nuclear power stations. A demonstration was also held in front of the Collectorate on the same day. In a meeting between environmental activists (Shri Krishna Kant and Shri Rohit Prajapati) and Engineer AV Shah of the Pollution Control Board, it was agreed that the people’s experts will also speak in the public hearing. However, on 4th March, a day before the event, the district collector announced that only the residents within 10 km radius of the project will be allowed to speak, the “outsiders” may submit their written documents.

The expert group appointed by the Village Committee was ready with a well researched alternative EIA. Rohit had done a throguh socio-economic study of the communities with help from 10 MSW students from JC kumarappa College of Social Work. Pugal, Ramesh and VTP were ready with their report which forcussed on oceanography, geology and environment.
Accrording to the law books, an environemntal public hearing is like a court in which the Presiding officer (normally the district collector) acts as a neutral judge – with project proposers on the one side and the affected people on the other side. This neutrality was not seen at the Mithi Virdi public hearing. The background music which was played before the meeting started extolled the virtues of nuclear power and the services rendered to the nation by NPCIL and DAE. Besides the collector and PCB engineer, there were some 20 people on the dias, who were not introduced to the audience. It seems all of them were all from DAE and NPCIL. The people, their leaders and experts were to sit in different barricaded enclosures, numbered on the basis of their “distance from the hyhpocentre”. Each of these enclosures also two armed persons and a video cameraman and a screen.

After explaining the procedure, with a veield threat that this is a government business and everything is videographed, the presiding officer invited the project proponent to present the case. This ws followed by NPCIL’s power-point presentation, which started with the importance of electricity and NPCIL’s past contributions (less than one percent of the total energy consumed in India) and future dreams. The presentation was mechanical, there was no presenter. At this point, Chuni Kaka, veteran Gandhian and Shakti Singh, Chairman of Jaspura village stood up and spoke about the procedural lapses and demanded that the presentation be stopped immediately. The collector was admant and refused to intervene. The people stood up gently and started moving out of the meeting peacefully. No slogans, no disturabnce to the power-point presentation. In less than five minutes, the presentation was stopped and the collector announced that the people can speak. He was too late. In another ten minutes, there were 5000 empty chairs, few hundreds of policemen and security staff with sten guns, about videographers and about 25 men on the dias. Narrating the event at a Press Conference in Ahmedabad on 7th March, Rohit said that as law-abiding citizens, the people could not be party to an illegal act, staged by the district administration.

Several “outsiders” like Krishna Kant, Rohit Prajapathi, Anand, Michaele, Swathi, Damayanthi Modi, Bijesh, several other young people including the volunteers from nearby colleges, lived with the farmers to educate the people on the ill-effects of nuclear power. The March 5 victory at Mithi Virdi is the supreme example of the courage, unity, determination and self respect of a people who are proud food producers. The surplus fruits, vegetables and fish they harvest can be found in the food baskets of people living in towns in rest of Gujarat and elsewhere. Manu Dada, 70 year old farmer from Jaspura said that “we had carried our own food, even though we were told that food will be provided by the organizers. We do not go after free meals”.

There are so many inaccuracies and missing data in the EIA. (Scientists do not tell lies, they only withold data, usually in the public interest or for the cause of science!) The alternative EIA written by the Peoples’ Expert Group is about 125 pages. The full report will be published soon. Some very important issues are listed briefly.

1. Nobody will be displaced by the project. No marine fisherfolk family lives in the land that will be acquired. Varshabehen, her family and several others work and live there, within the so-called exclusive zone of GNPP.

Note: The identity card of Varshaben Jesalbhai, issued by the Marine Fisheries Department, Government of India – She lives in a coastal settlement, which is in the exclusion zone of GNPP. All these families have been living permanently there, they are registered voters and have ration cards. According to EIA, (a) no family will be displaced by the project and (b) there is no fisherfolk household within the exclusive zone. Photographed on 6th Mar 2013.

A nuclear reactor has to be built on a stable rock. In order to ensure that there is a stable continous rock under the reactor foundation, rock samples needs to be taken from 100 meters below the proposed site. No drilling has been done at the reactor site, because of peoples protests.

The ministry of environemnt and forests had demanded to conduct a study of the maximum flood level and mitigation strategies. The EIA clearly mentions that no study of flood has been undertaken.

Kalapsar is a $ 10 billion project of Narendra Modi government, which will create a 2000 sq km freshwater lake in the Northern one-third area of the Gulf of Khambhat. A forty km dam will be constructed. There will be a road and rail line on it which will link mainland Gujarat with Saurashtra. Kalpasar Project lies just 43 km north of the Mithi Virdi NPP site. This will change the water level, tidal height and many other variable in the Souther half of the gulf. There is no mention of Kalpasar project in the EIA.

The western limb of the dam sits on the North-South trending West Cambay Basin Fault (active) that happens to pass 11 km west of the Mithi Virdi site. Dr.B.K.Rastogi, of the Institute of Seismological Research (ISR), Gandhinagar warns of a “reservoir induced earthquake because of the project.” On 21, June 2011 B N Navalawala, advisor to the Gujarat Chief Minister, said thjat “though a study was carried out to assess the impact of an earthquake measuring 8.1 on the Richter scale, the state government now has decided to carry out a study of an earthquake measuring 9.5 on the Richter scale. After the Japanese experience, a need was felt for a re-look at the whole issue.”
.
5. Tsunami from the earhquake

If an earthquake of 9.5 on Ritcher hits the Gulf of Khambhat, the tsunami waves it will cause will be higher than those experienced at Fukushima.

6. The Presence of Alang-Sosiya Ship-breaking project

The presence of hazardous industries near the nuclear project site has to be clearly shown in EIA. According to EIA, the Sosiya ship-breaking yard is 4 km from the site. The actual distance is only 700 meters. Because of this, the site is not suitable for a reactor complex. If the nuclear park comes up, nearly forty ship-breaking units will have to be closed.

7. Tidal Range of the Gulf

The tidal range at Gulf of Khambhat is the largest along the Indian coastline. It has been identified as the biggest sediment sink among the five major sediment sinks of India. Gulf of Khambhat has the highest tidal range in India. The mean tidal elevation during spring is 4.7 m at Mahuva Bandar which rises to 6.5 m at Gopnath Point and 10.2 m at Bhavnagar. The maximum spring tide recorded at Bhavnagar is 12.5 m, which is second only to that of the highest tide recorded anywhere in the world (around 17 m at the Bay of Fundy on Newfoundland coast of Canada). So one can assume the spring tide at Sosia – Mithi Viradi coast (the coast that lies between Gopnath and Bhavnagar) to be between 6.5 m and 10.5 m.

There are other unresolved questions about the safety of AP1000 reactor also. To be brief, we only mention that a 3,000,000 liter water tank is perched on top of the reactor building. Normally, these tanks are located on the groundlevel. The water tank 100 meters above the ground level can be an easy target for terrorist attack.

Our critique of Mithi Virdi EIA is based on studies conducted by the scientists of Gujarat government and reputed academic institutions in the country. The EIA presented by NPCIL should be reviewed by an independent extert committee. The project, if implemented, can lead to national disaster, whose impact will be experienced by people and the eco-system, beyond the borders of Gujarat.

Neither gloves nor saline drip, patients given just half a dose
Condolence Meeting- Young revolutionary and cultural organiser Shalini passes away #RIP
From Canada to Mangaluru - all for his mom's #Aadhaar card #WTFnews
#Sundayreading - Anybody But Modi {ABM} gathers steam