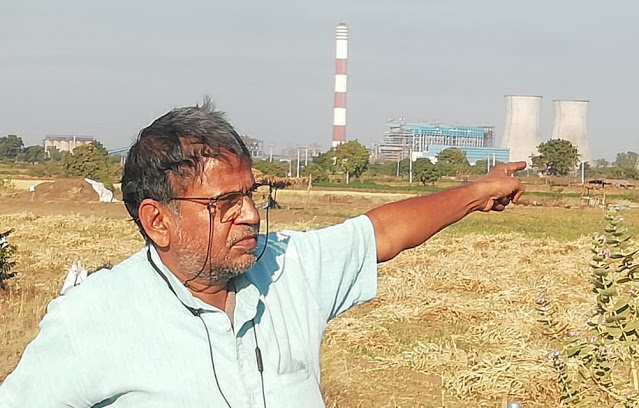 Gujarat’s senior environmentalists Rohit Prajapati and Krishnakant of the Paryavaran Suraksha Samiti (PSS) have warned of contempt proceedings for allegedly violating the Supreme Court order dated February 22, 2017, in the Writ Petition (Civil) No 375 of 2012, against the state public sector undertaking (PSU) Bhavnagar Lignite Thermal Power Station (BLTPS) “for non-compliance of the major conditions of the environment clearance”, even as going ahead with lignite mining.

In a letter to senior officials of the Union environment and forests ministry and its Gujarat counterparts as also Central Pollution Control Board and its state counterparts, the letter says, the 2X250 MW lignite-based thermal power plant, located at village Padva, taluka Ghogha, Bhavnagar district, owned by the Gujarat government has been “doing lignite mining in and around Badi-Padva area without having the requisite effluent treatment plant (ETP) and sewage treatment plant (STP), as directed by the the Supreme Court Order.”
Worse, the letter, a copy of which has been forwarded to the local people’s organisation Gam Khedut Sangharsh Samiti, Badi Padva, regrets, the Gujarat Pollution Control Board (GPCB) has not implemented the Supreme Court order by refusing to issue a closure notice to the plant.

Herewith, we are reiterating the facts mentioned in our last letter, dated February 11, 2021, to remind you that you consciously decided not to implement the Supreme Court Order, Dated February 22, 2017, in W. P. (C) 375 of 2012 for the Gujarat State Electricity Corporation Limited (GSECL, BLTPS) and Gujarat Power Corporation Limited (GPCL) owned by the Government of Gujarat, for the best reasons known to you. Your non response and utter silence raise very fundamental questions about the rule of law and implementation of the Supreme Court Order dated February 22, 2017. Why did you decide not to reply to our letters? Why did you decide not to implement the Supreme Court Order dated February 22, 2017? It is expected from the concerned authorities that they should say something in writing about the fundamental issues raised by us in our letters. At least, silence should not be considered as your response, should it?
Are you feeling helplessness to take action against the Government owned power plant which comes under red categories? We expect some reply from the concerned authorities.
The Bhavnagar Energy Company Ltd. (BECL), 2 X 250 MW lignite based Thermal Power Plant, is located at village Padva, Taluka Ghogha of Bhavnagar district in Gujarat. In 2019, it merged into the Gujarat State Electricity Corporation Ltd. (GSECL, BLTPS) and the Gujarat Power Corporation Ltd; (GPCL), a mining company, doing lignite mining in and around Badi-Padva, Taluka Ghogha, District Bhavnagar, Gujarat are admittedly functioning in violation of:

It was and is expected from the concerned authorities to implement the Supreme Court Order, dated February 22, 2017, in letter and spirit for both these Government of Gujarat owned companies. The disaster unfolding around the Badi-Hoidad Lignite Mining Site in Bhavnagar District, Gujarat, has done irreversible damage to the groundwater, farmlands, air quality, agriculture, and health of the villagers and other living beings in the surrounding areas. The villagers have been reporting that the fruit bearing trees like jamun and mango in the area are withering because of groundwater pollution. The villagers also report that they are unable to grow vegetables, specifically onions and groundnuts now.
This clearly indicates the adverse impacts and subterranean geological activity due to mining and, the drilling operations carried out before mining in the past to find lignite.
It has been three months since the disaster, dated 16.11.2020, at Badi-Hoidad Lignite Mining Site, Bhavnagar District, Gujarat. Detailed letters, dated November 26, 2020, November 30, 2020, December 18, 2020, January 19, 2021, February 2, 2021, and February 11, 2021, were sent to the concerned authorities about the disaster that came to light in November 2020 with unusual and shocking rising of the farmlands in the area.
On Monday, November 16, 2020 at around 9.00 am when villagers while on their way to wish their friends best wishes for the new year, suddenly witnessed a huge raising of the farmland up to 30-40 feet in the village of Hoidad, Taluka Ghogha, District Bhavnagar, on survey No. 49/1, 49/2, 47, 48, 23 (Gauchar Land), etc. The villagers did not know exactly what time the land rising had occurred. The villagers were shocked to see this dreadful disaster unfolding in front their eyes. The width of this elevated land is about 300 meters and it is about 700 meters long and it has been seen to spread further into the farmland by a few meters. Even a large mound of topsoil dumped by the GPCL was found to be descending into the ground and its descent into the ground is ongoing.
The contractors of Gujarat Power Corporation Limited have been doing mining in this area since 2018. According to the villagers and the executive of the GPCL, a similar tragedy — disaster took place in December 2019 at survey No. 119/1 near the farm of Italia Vitthalbhai Lovejibhai in Thordi village. Here, the ground was elevated across a length of more than 100 meters, which can be seen even today. The company officials also casually acknowledged the disaster in presence of the Assistant Collector of Bhavnagar, Gujarat as if it was a small, non-serious incident.

Despite repeated letters and reminders, the concerned authorities continue to maintain silence with no directive / explanation, or any feedback shared with the panchayat members, and the authorities in more than twelve affected villages. Instead of the closure notice only a legal notice, dated December 31, 2020, was issued by the GPCB pointing out serious lapses in the functioning of the Gujarat Power Corporation Limited, which does not even have the Supreme Court mandated Effluent Treatment Plant (ETP) and Sewage Treatment Plant (STP). If we read the legal notice, all the major and crucial conditions of the Environment Clearance are admittedly violated.
Disaster around the lignite mining site has done irreversible damage to groundwater, farmlands, air quality and health of villagersUntil now there is no notice given to the Gujarat State Electricity Corporation Ltd. (GSECL, BLTPS) for admittedly non-compliance of the EC conditions and the violation of the Supreme Court Order dated February 22, 2017.We are surprised that in such dire circumstances the GPCB has not yet issued the closure notice to the Gujarat State Electricity Corporation Limited (GSECL, BLTPS), and the Gujarat Power Corporation Ltd; (GPCL) inspite Order, dated February 22, 2017, of the Supreme Court in Writ Petition (Civil) No. 375 of 2012 (Paryavaran Suraksha Samiti & Anrs V/s Union of India & Ors! The Supreme Court Order clearly states:“4. […] We therefore consider it just and appropriate, to direct the concerned State Pollution Control Boards, to issue notices to all industrial units, which require “consent to operate”, by way of a common advertisement, requiring them to make their primary effluent treatment plants fully operational, within three months from today. On the expiry of the notice period of three months, the concerned State Pollution Control Board(s) are mandated to carry out inspections, to verify, whether or not, each industrial unit requiring “consent to operate”, has a functional primary effluent treatment plant.
“5. Such of the industrial units, which have not been able to make their primary effluent treatment plant fully operational, within the notice period, shall be restrained from any further industrial activity. This direction may be implemented by requiring the concerned electricity supply and distribution agency, to disconnect the electricity connection of the defaulting industry. We therefore hereby further direct, that in case the concerned State Pollution Control Boards make a recommendation to the concerned electrical supply and distribution agency/company, to disconnect electricity supply to an industry, for the reason that its primary effluent treatment plant is not functional, it shall honour such recommendation, and shall disconnect the electricity supply to such defaulting industrial concern, forthwith.”
The Supreme Court Order further clearly states:
“13. We are of the view, that mere directions are inconsequential, unless a rigid implementation mechanism is laid down. We therefore hereby provide, that the directions pertaining to continuation of industrial activity only when there is in place a functional “primary effluent treatment plants”, and the setting up of functional “common effluent treatment plants” within the time lines, expressed above, shall be of the Member Secretaries of the concerned Pollution Control Boards. The Secretary of the Department of Environment, of the concerned State Government (and the concerned Union Territory), shall be answerable in case of default. The concerned Secretaries to the Government shall be responsible of monitoring the progress and issuing necessary directions to the concerned Pollution Control Board, as may be required, for the implementation of the above directions.
“14. […] The concerned Pollution Control Board is also hereby directed, to initiate such civil or criminal action, as may be permissible in law, against all or any of the defaulters.”
We are attaching again the copy of the Supreme Court Order for your ready reference with this letter, so that you can implement the Order, dated 22.02.2017, of the Supreme Court in Writ Petition (Civil) No. 375 of 2012 (Paryavaran Suraksha Samiti & Anrs V/s Union of India & Ors) in letter and spirit.
Why are the concerned authorities not ready to implement the above-mentioned directions of the Supreme Court? Who all are responsible and accountable for this disaster?
We feel very distressed to state that this episode indicates a non-serious and nonchalant attitude and unscientific approach of the concerned authorities as well as the companies owned by the Government of Gujarat. All the concerned officials in the authorities and both the companies should be fully responsible for the short-term and long-term consequences on environment, the affected people, their livelihood options, and for the contempt of the Supreme Court Order.
We expect your prompt and positive response in the interest of life, livelihoods, and environment. If you fail in your duties, you will, as the concerned authorities and individuals, will also be collectively liable for present dire conditions and future legal and other consequences, including but not limited to the procedures and contempt of the Supreme Court Order, dated February 22, 2017.