Eunice Newton Foote: Warned Us About Climate Change 165 Years Ago. Naturally, We Ignored Her 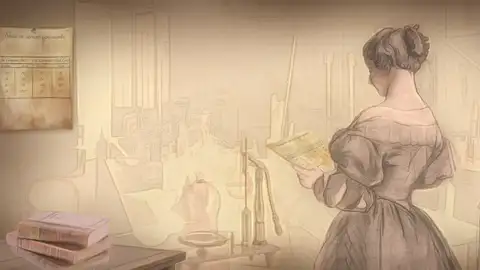 An illustration of Eunice Newton Foote at work on her study of the heat absorption of carbonic acid gas. No known portrait of Foote exists. (Carlyn Iverson/NOAA)

When the industrial revolution began in the late 1700s, it brought with it several technological advancements that humanity had not dared to dream of for thousands of years. But everything has a downside to it, and the Industrial Era was no exception—the cost ranged from unbearable local pollution in the short-term to persistent global warming in the long run.

With the advent of steam engines and large-scale coal burning, a lot more carbon dioxide was being released into the atmosphere compared to pre-industrial times. And while most humans were too busy enjoying the fruits of industrialisation to notice that something was seriously wrong, a very tiny subset of researchers speculated on what was coming and even tried to warn humanity.

One of the earliest warnings came 165 years ago, from Eunice Newton Foote. But like many other women of her time, Eunice was largely ignored, and so were her findings.

Who was Eunice Foote, and what was her contribution to science?

Foote was an amateur scientist in the 1850s—when the industrial revolution in America was happening in full swing. In 1856, the American scientist, through her findings, tried to convey how the rising carbon dioxide levels would lead to the Earth warming up. In her brief scientific paper, Eunice described the remarkable ability of carbon dioxide gas to absorb heat, which is the primary cause of climate change.

In 1824, the popular physicist Joseph Fourier was the first to propose that Earth’s atmosphere kept the planet warmer than would be the case in a vacuum. A couple of decades later, geologists were still working on discovering the exact cause for the warming of the world’s climate. They believed that the atmosphere once had substantially higher quantities of carbon dioxide during eras when coal deposits were developing in marshy seas. And Foote accurately predicted that this would have resulted in a significant increase in global temperatures.

How did Foote arrive at this conclusion?

Foote conducted a series of experiments. She filled up different test tubes with moist air, dry air, CO2 and encased a mercury thermometer in each tube before exposing them to sunlight. She then realised that the heating impact of the Sun was larger in moist air than dry air and that it was highest of all in the tube containing carbon dioxide.

“The receiver carrying this gas became significantly heated—very sensibly more so than the other—and it took many times as long to cool after being removed [from the Sun],” she wrote.

Eunice’s experimental methodology wasn’t very sophisticated, so she couldn’t determine how atmospheric factors influenced solar heating, or how water vapour and greenhouse gases boost Earth’s temperature by absorbing heat radiated by the surface rather than by absorbing incoming sunlight.

Her study was presented at the American Association for the Advancement of Science (AAAS) Annual Meeting on August 23, 1856, although not by her, but by a male colleague, the distinguished Joseph Henry. The conference proceedings, however, did not include Foote’s work or Henry’s presentation of it.

Three years later, John Tyndall, through more advanced experimental designs, showed that the Earth’s greenhouse effect comes from water vapour and other gases like carbon dioxide that absorb and emit thermal infrared energy, not visible sunlight. And while Tyndall credited Mathias Pouillet for his work on the passage of solar radiation through the atmosphere in his publication, there was no mention of Eunice Foote.

Whether it was intentional or not didn’t really matter; what mattered was that Eunice’s discovery, which was groundbreaking considering the resources she had, should’ve received wider recognition.

The industrial revolution itself was not the villain it is often painted to be, but century-long ignorance towards such early warnings led to continued accumulation of greenhouse gases in the atmosphere. More than 200 years after industrialisation began, humans are still struggling to tackle the climate crisis despite decades of technological advancements. Who knows, an early start could have saved us a lot more struggle for the decades to come.