‘Even In Our Moment Of Freedom, State Tried Inflicting Pain’: Activists Natasha Narwal And Devangana Kalita 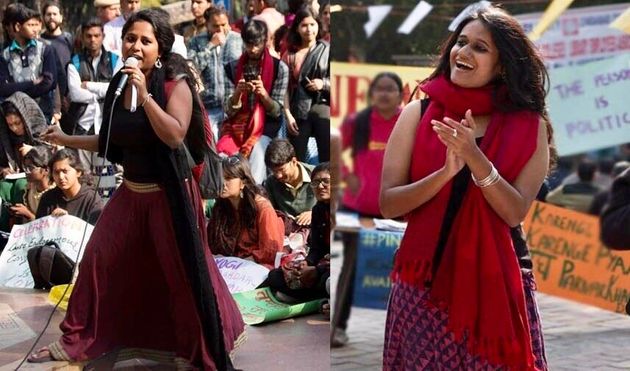 The Delhi Police arrested Devangana Kalita and Natasha Narwal, founder members of Pinjra Tod, in May 2020 and booked them under the Unlawful Activities (Prevention) Act in connection with the Delhi riots.

In an interview with Outlook, student activists Natasha Narwal and Devangana Kalita discuss their arrest and bail, the use of UAPA on protesters and the future of the anti-CAA movement

Pinjra Tod activists Natasha Narwal and Devangana Kalita were released on bail on June 17 after being arrested under the Unlawful Activities (Prevention) Act in connection with the northeast Delhi riots in 2020. Before their arrest, they had actively participated in the anti-Citizenship Amendment Act (CAA) protests that occurred in Delhi in 2019.

While the Delhi High Court made many strong observations regarding their case, upholding their right to protest, the Delhi Police has moved Supreme Court challenging their bail.
In an interview with Outlook, Natasha and Devangana discuss their arrest, the use of UAPA on activists and how reading sessions and play enactments inside prison helped them regain a sense of their autonomy despite being incarcerated. Excerpts:

Q1) While granting you bail, the Delhi High Court observed that your participation in the anti-CAA protests is your fundamental right and it cannot be termed as a terrorist act under UAPA. Your comments.

Natasha: Firstly, we would like to thank the Delhi HC for such a strong bail order and in the current scenario it is a very welcome judgment. It has made many strong observations about how the right to protest is being rampantly criminalised by the government. And while branding such protests as terrorist and anti-national activities has a long history, with many previous regimes indulging in it, it has become more intensified now. According to the government’s own data, from 2016-2019, invocation of UAPA has increased by 70 per cent, and most of the people on whom it is being invoked against are those have been raising their voices against various forms of oppression and those who belong to minority communities. So, in such a scenario, the Delhi HC judgment is very welcome.

Q2) Those imprisoned under UAPA find it almost impossible to get bail. You received bail within 13 months of arrest. Your comments.

Devangana: For us, our bail order as much as it is welcome it is quite a shock because while the general rule is that jail is the exception and bail is the norm, under UAPA, it is the other way round.

Further, the manner in which our arrests occurred made it clear that UAPA was slapped on us only so that our period of incarceration can be infinite. I say this because, the first case we were booked in, we got bail the very next day and the magistrate judge also observed that this is a case of people participation in the anti-CAA protests. Then we received bail in another case in September but we remained imprisoned because of UAPA. So, it is very clear why and how this law was imposed on us and it’s been used against many other activists as well, who continue to languish in prisons. So, it is actually a mixed feeling because we don’t feel fully free as there are many others who are still imprisoned and we hope that the Delhi HC judgement will open doors for them as well.

Q3) The Delhi Police has approached the Supreme Court challenging your bail. While moving SC, Solicitor General Tushar Mehta, appearing for the police said, that with the Delhi HC judgement, “Entire UAPA has been turned upside down on its head along with the Constitution.” Your comments.

Natasha: I won’t be able to comment much because it is still sub-judice but this bail order has opened up a debate in the country on the use of UAPA and how and why it is invoked. So, we hope that the SC discusses this at length and gives an appropriate order in the interest of justice and liberty for everyone and for upholding the constitutional rights of all citizens.

Q4) Even though you were granted bail on June 15, you were only released on June 17. What were your thoughts during those intervening days?

Devangana: We got the news of our bail quite late in the afternoon on June 15 because the phone lines inside prison weren’t working that day. So yes, we were very elated, we celebrated with our co-inmates and our lawyers told us to keep our bags packed and be ready to leave soon.

But only the next day, we got a sense of the drama that was unfolding out there. For instance I learnt that the police wanted to visit my hometown in Assam to verify my address and they were asking for one week’s time. Basically, attempts were being made to unlawfully detain us even after we got bail and this showed their sense of desperation.https://c88e380b16a8758a8f53f28f83878b9d.safeframe.googlesyndication.com/safeframe/1-0-38/html/container.html

And even our release was very absurd because at the time they locked up all our fellow inmates and didn’t let us meet them or bid goodbye. So, even in our moment of freedom the State was trying to inflict pain and that was very anxiety inducing.

Q5) Natasha, in one of your letters during your incarceration, you wrote, “Basically prison is an extension of the logical end of all the unfreedoms in the society one has been fighting against, everything meant to crush one’s autonomy.” Can you elaborate on that and what kept you going?

Natasha: What I meant was, of course prison is an exceptional space in the way in which it takes away all our rights and dignity but I also felt that it is a continuation of all the oppressive structures present outside in the society as well.

Especially as women, one is so used to various kinds of surveillance including the time we step out and come back home being scrutinised, we being questioned for where we go and whom we meet. So, I just felt that this control over our lives, was just being extended in prison. And as Pinjra Tod activists we have been struggling against these kinds of oppressive structures for long.https://c88e380b16a8758a8f53f28f83878b9d.safeframe.googlesyndication.com/safeframe/1-0-38/html/container.html

However, I would like to assert that even in such circumstances it was heartening to forge relationships based on love, care and friendship with our fellow inmates. This let us take care of each other and create certain spaces to take back our autonomy from a system which didn’t want to give us any.

We would sing, laugh, dance or just stare at the sky together and dream of the world outside or make plans for what we would do when we got out. Also, we could just hold each other when someone lost their strength for the day and these things made us feel okay.

Q6) Devangana, in one of your letters you wrote that you had a reading session of ‘Sultana’s Dream’ in your barrack. Can you tell us more about that?

Devangana: One of our friends had sent us a very well-illustrated edition of ‘Sultana’s Dream’. So, we had two reading sessions of it in our barracks and everyone was very excited. We also had many writing sessions. Many inmates would come to our barracks to practice reading and writing and it was very fulfilling to see people write their first letter home.

Apart from this, we also enacted a play to mark International Women’s Working Day on March 8. We enacted Savitribai Phule’s life and the person playing the lead role, had in fact learnt about her while in prison. So, considering the way prison dehumanises you, to be able to do these things meant a lot.

Q7) What do you think is the future of the anti-CAA movement?

Natasha: It would be very pompous of us to answer that because this question is for everyone to think about collectively and we will be contributing to that and be a part of it in whatever way we can. But, I would like to highlight that the movement has made us all question the idea of citizenship in this country, not just in legal terms but also in terms of how as a lived reality it is very different for so many of us. Even the issue of imprisonment is linked to the issue of citizenship and whose rights can be taken away so easily and whose cannot.

Devangana: The future of the movement will be collectively decided, but one thing that is clear is that attempts to spread fear by arresting anti-CAA protesters haven’t been successful. And it is also important we continue to fight for the release of all activists who were arrested after taking part in the movement.

Q8) What are your future plans?

Devangana: I have an MPhil submission coming up, it is important for me to continue my academics. I will also continue taking part in various democratic struggles.

Natasha: I am enrolled in a PhD programme, so I will focus on that and continue with activism. However, I would also say that the question of the future also needs to be collectively thought about, because right now it looks bleak for so many sections of the society. So, it is something for all of us to collectively figure out how we will rebuild our lives post the pandemic and build a future which is just for everyone.