Ex-Stanford professor: I was pushed out after reporting sexual harassment #Vaw 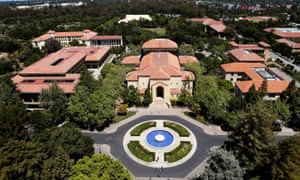 Karnes and her husband now have positions at Notre Dame University.

Hinton told the Guardian Karnes’ complaint stemmed from a “single conversation”, adding, “I participated fully in the review, and the result was that I had not violated any Stanford policies, including sexual harassment.”

Asked about the kissing incident, he said their friendship was “warm, even affectionate” and that “on one occasion we accidentally kissed each other on the lips”.

Saller, the dean, denied the retaliation claim, but declined to comment further.

The university investigator concluded that Luhrmann, his wife, did not want Karnes to leave Stanford, but had “advised” her as a “fellow female academic, she should go where her husband can also get a job”.

Luhrmann told the Guardian in an email that she “often gave Michelle mentorly advice” and had suggested Karnes consider consulting an official authorized to give guidance on sexual harassment. And when she heard Notre Dame might be an option, “I told her that if I were in her position, I would take those jobs, although I would be sad to see her leave,” Luhrmann said.

Karnes said she decided to speak out after hearing so many stories of harassment and retaliation at Stanford, often involving powerless graduate students.

She said Stanford also offered a financial settlement that would probably have required them to remain silent. Her account echoes a recent report in BuzzFeed suggesting that the university offered money to two women in an attempt to close federal investigations into the school’s handling of sexual assault.

The reporting process felt like an opportunity for Stanford to prepare for a potential lawsuit, Karnes added.

Duarte said the university’s treatment of his wife made it clear that the college refuses to acknowledge the mistreatment many people face: “I don’t think that the administration believes there’s a real sexual harassment problem at Stanford.”