EXPOSED- Food Ministry, Rural Ministry Have No Evidence to Back Government’s Claims on Savings from #Aadhaar 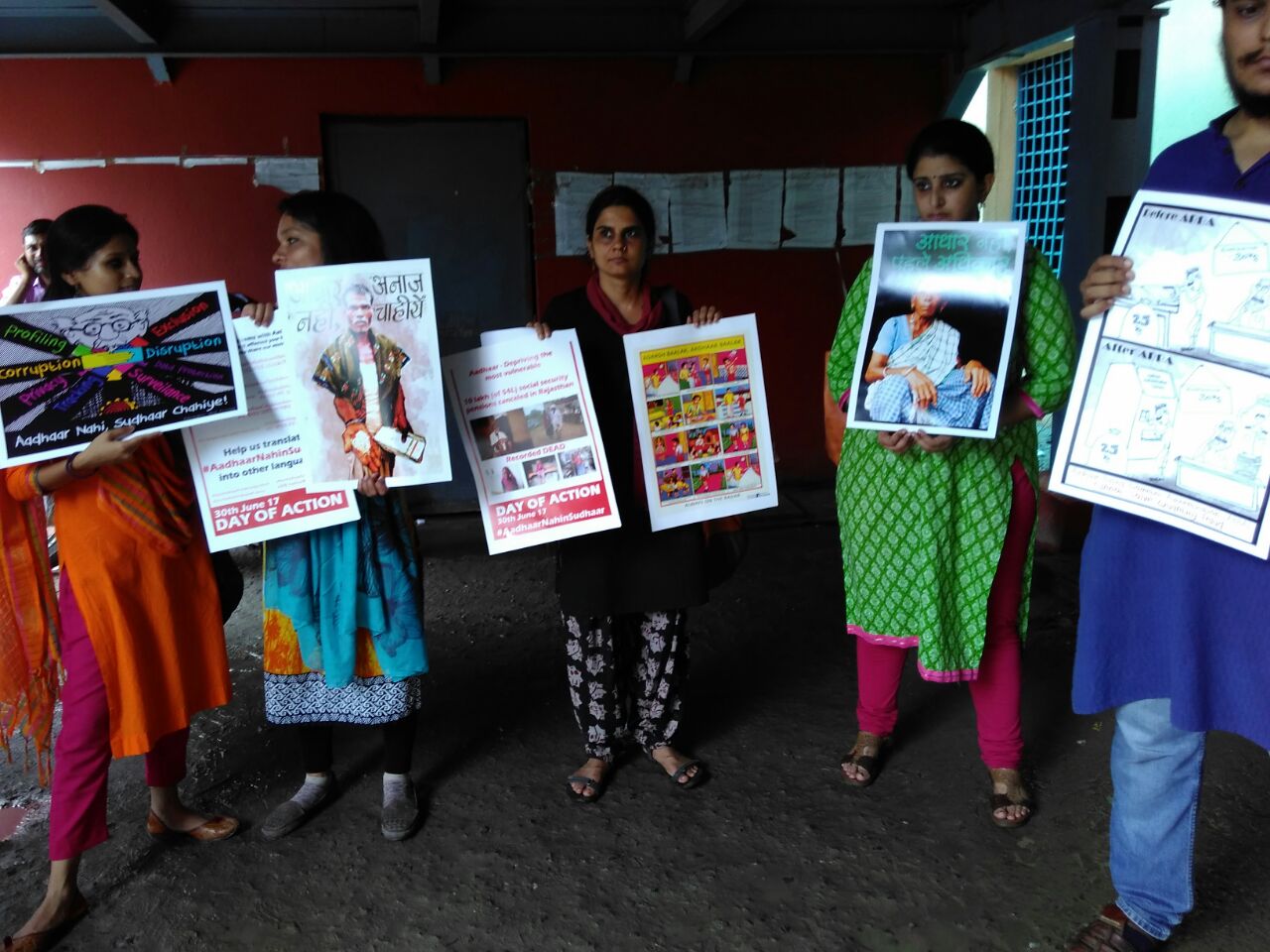 New Delhi- Social activists and  researchers  today exposed the claims of the government about savings due to Aadhaar and about the benefits of Aadhaar in welfare programs and schemes.

On February 7, 2017, the Prime Minister in the Lok Sabha stated that use of Aadhaar and technology led to the discovery of nearly 4 crore (3 crore 95 lakhs) bogus ration cards (you can see video of his speech here –

Since no details of these 3.95 crore ration cards was available online, an RTI application was filed by Satark Nagrik Sangthan activist Anjali Bhardwaj to the Prime Minister’s Office (PMO) seeking state-wise break-up of the 3.95 crore bogus rations cards and the names and addresses of all those whose cards were cancelled. The PMO transferred this RTI application to Department of Food & Public Distribution (DFPD). DFPD replied stating that information about the state-wise number of bogus ration cards was available on their website.

On the website of the DFPD, a file titled “Deletion of bogus ration cards by States/UTs” is available. This file provides the state-wise “Statement showing the number of bogus/ineligible rations cards deleted by the State/UT Governments with effect from July 2006 onwards” and was “Updated on 16.02.2016”.

Anjali Bhardwaj said that the file on the website of the Ministry is not related to the statement of the PM as it neither pertains to the time period mentioned by the PM nor does it state that the cards were found to be bogus due to technology or Aadhaar. Further, the figures provided in the file do not match with the figures stated by the PM.

With respect to the question dealing with the names and addresses of those whose cards were cancelled, the RTI application was transferred to all the State/UT governments by the Department of Food & Public Distribution (DFPD). Till date 25 states/UTs have sent letters/replies to the RTI application which was transferred to them. 13 states have replied stating that there are no bogus ration cards. For details of the responses received from states, please see the folder attached.

Therefore, despite the passage of more than 5 months since seeking information under the RTI Act the government has not been able to provide information/ evidence on the basis of which the PM made the statement in the Lok Sabha. While the video of the proceedings and the uncorrected record of Lok Sabha of 7th February 2017 mentions the number of bogus ration cards as nearly 4 crore, meaning 3 crore 95 lakhs, the corrected version of the debate states 4 crore, meaning 2 crore 33 lakhs. It is not clear why the content of the PM’s speech has been changed as the video clearly shows the figure as being- 4 crore, meaning 3 crore 95 lakhs bogus ration cards.

Similarly, recently the media quoted government officials as stating that 1 crore fake job cards had been found during the process of cleaning up by seeding with Aadhaar etc.
Economist Dr Jean Dreze filed an RTI application which showed that so-called “fake” and “duplicate” job cards account for less than 13% of all deletions in 2016-7 which were 94 lakh. Other deletions were on account of a change in address, mistakes on job cards, people who wanted to surrender their job card etc. Bearing in mind that there are more than 12 crore job cards in the country, according to official data, duplicate and fake job cards account for barely 1 per cent of all job cards according to government’s own data, so why had the government made exaggerated claims to press and in court, asked the researchers.

In Ranchi, Jharkhand where the Aadhaar linked biometric authentication system for ration has been operational since 2016, IIT-Delhi economist Reetika Khera said that many families were unable to receive their ration for the month of June 2017, as per the data on the official government website. Reetika explained that 15% of card holders in Jharkhand were deprived of their grain entitlements on a monthly basis.

A survey undertaken by IIT Delhi in collaboration with Ranchi University, covering about 900 randomly-selected households in 32 villages spread across eight districts in Jharkhand, showed that even for those whom Aadhaar authentication and network connectivity worked, transaction costs have increased as a result of Aadhaar-Based Biometric Authentication (ABBA). Households report longer queues, increase in the number of trips required, asking children to miss school so that at least some member in the family could get successfully authenticated in order to work the new system.

Also, Reetika explained “Katauti” or quantity fraud, pilferage of grains by dealers continues same as before: Households also report that the ‘cuts’ extracted (in kind) by PDS dealers have remained more or less the same before and after the introduction of ABBA as the Aadhaar system has no mechanism to check pilferage by dealers even even after someone a card holder submits biometrics.

Dr Dipa Sinha of Right to Food Campaign expressed conecrns that the government was without any evidence making Aadhaar mandatory for all children’s schemes. Recently, the government also issued a notification making Aadhar mandatory for mid-day meal (MDM). She said the main problem in MDM is quality of meal, menu nont being displayed, prioritising of private contractors over community run nutrition centers, and there is no concrete evidence of attendance inflation. If the government starts doing daily authentication it will be a huge disaster given the problems with biometric authentication especially of children whose biometrics are not fully formed.

The speakers demanded that the government must provide the evidence and basis of all such statements as eventually such figures inform policy decisions and public discourse. Nikhil Dey pointed out that in Rajasthan when the government cancelled the pension of more than 10 lakh beneficiaries claiming that these had been weeded out through various reforms including Aadhaar, on ground verification showed the hollowness the claims. In Bhim block in Rajsamand, the government had shown that 2900 beneficiaries had been weeded out as they had died, however, a door to door verification showed that more than 1300 of these people classified as dead were in fact alive and were being denied their pensions. He said that this showed the callousness of the administration and exposed why it was urgent that the data be made public so that people can verify it.

The speakers also stated that if the claims of such large scale corruption being weeded out through Aadhaar were indeed true, then the government must also show how many FIRs have been filed till date and what action has been taken against government officials with whose collusion all these bogus cards were made.
The speakers strongly contested the claims of the government that Aadhaar was ensuring food security for millions of people.

Nikhil Dey cited the official data of the Rajasthan government which shows that since September 2016, when Aadhaar biometric authentication was made mandatory in the state, over 25 per cent of ration card holders have been unable to draw their rations. That amounts to 25 lakh families, or more than a crore of the most vulnerable people. The removal of the manual override mechanism, which could be used when biometric authentication failed, has resulted in an additional 5 lakh families being excluded in April and May 2017.

Amrita Johri said that the government was suppressing data about failure of the Aadhaar enabled biometric authentication. In Delhi, in 42 shops the Aadhaar linked Point of Sale (POS) devices were piloted. Visits to these shops showed that were several problems regarding connectivity and difficulty in authenticating biometrics especially of the elderly and those engaged in manual labour. In one ration shop, the POS device had to be hung on a tree due to network problems!  Yet the report on the pilot, obtained under the RTI Act, makes no mention of these problems, in fact it does not even state whether any site visits were undertaken while compiling the report. The Delhi government is now reportedly pushing through with universalizing the POS devices in all ration shops in Delhi.

Several people from different districts of Delhi testified about the exclusions they are facing as a result of Aadhaar being made mandatory for receiving ration cards. The Delhi Rozi Roti Adhikar Abhiyan has filed a case in the Delhi High Court challenging the government’s notification making Aadhaar mandatory and the court has appointed a local commissioner to look into cases of exclusions.

While the central and state governments have been aggressively pushing Aadhaar as a tool for addressing corruption in ration, despite little evidence to support this, they have failed to operationalise the mandatory transparency, accountability and grievance redress provisions of the law. The National Food Security Law requires every state government to constitute a State Food Commission and appoint District Grievance Redress Officers to receive and redress complaints of people. Further, periodic social audits of the functioning of ration shops and PDS is required to be undertaken along with setting up vigilance committees. Most states have failed to implement these measures and in a recent case, the Supreme Court summoned Chief secretaries of several states and has directed that all these measures must be operationalised by the end of the year.

Anjali Bhardwaj said that in Delhi, an audit of 10% of the ration shops undertaken by Delhi Rozi Roti Adhikar Abhiyan & Satark Nagrik Sangathan found flagrant violations in the functioning of these shops- more than 60% of the ration shops were found to be closed during working hours while several were found to be illegally selling atta. Desite Delhi being one of the first states to roll out the NFSA in 2013, till date, the government has not constituted the State Food Commission and has also failed to operationalise the social audit provisions.
The speakers said that the failure of the governments to implement the accountability provisions of the NFSA showed the lack of political will and commitment towards addressing corruption in the PDS.