A vaginal mesh implant made by Johnson & Johnson (J&J) was launched without a clinical trial, and then marketed for five years after the company learned that it had a higher failure rate than their two earlier devices.

Internal company emails disclosed in a US court case, in which a 51-year-old woman was awarded a record $57m in damages this month, also show that senior executives even briefly considered suppressing unfavourable data that “could compromise the future” of the device.

J&J’s Ethicon unit was found by a US court to be liable for the serious injuries Ella Ebaugh suffered after receiving a mesh implant to treat urinary incontinence. The mother of five said she was left with a mangled urethra, bladder spasms and continual pelvic pain after an unsuccessful procedure that led to three revision surgeries to remove mesh that had cut into her urethra and migrated to her bladder.

But documents submitted to the court show J&J staff had raised concerns about the “spinning of data” in emails and male executives are seen bantering about a suggestion that sex with an earlier patient with mesh complications must be “like screwing a wire brush”.

When it emerged from initial data that the success rates for a new device looked to be “way below” those seen for previous products, Ethicon’s director of sales, Xavier Buchon, suggested in an email “stop[ping] for a while such publications that could compromise the future”.

The J&J implant, used to treat urinary incontinence, was launched in 2006. Despite the early indications of a high failure rate, it was only withdrawn in 2012 after being used in thousands of operations in the US, the UK and Australia. The documents raise uncomfortable questions for the manufacturers of vaginal mesh products, which are the subject of growing controversy.

The implants, which reinforce tissue around the urethra, are widely used to treat incontinence, and for the majority of women the procedure is quick and successful. However, some women have suffered debilitating complications, including severe pelvic pain, the mesh eroding through the vaginal wall or perforating organs.

Class action law suits are underway in Australia and the US, where lawyers claim that patients have been exposed to unacceptable risks; in England, NHS data suggests as many as one in fifteen women later requires full or partial removal of the implant.

Ebaugh, whose case was heard in Philadelphia, said that her complications have left her with constant pelvic pain, meaning for example, that although she attended her daughter’s recent wedding, she was unable to enjoy it. “I feel like I’m on fire down there,” she said in an interview with CBS.

The tranche of documents, revealed during the trial, places a spotlight on tensions between Ethicon’s commercial and clinical divisions at the time it launched its “miniature” mesh product, called the TVT-Secur, in 2006.

The company hoped that the new device, which was smaller and required fewer incisions, would reduce complications seen with its earlier devices. But getting to market ahead competitors, who had similar offerings in the pipeline, was described as “priceless” in company documents. It was approved for use without a trial under US and European equivalence rules, which allow this when a new device is similar to existing ones.

Carl Heneghan, professor of evidence-based medicine at the University of Oxford who has called for a public inquiry into the use of mesh, condemned the decision to launch a device before a trial, saying this had “led to direct patient harms”. “It has made it impossible to provide informed choice to women, and points to a regulatory system that is failing patients,” he added.

Prof Bernard Jacquetin, an eminent French gynaecologist whose early study on TVT-Secur had led to misgivings among J&J management, told the Guardian the company had acted “irresponsibly” by launching the device without adaquate evidence.

Ahead of the device’s original launch, Jacquetin was invited to the US to give advice on the new design, but was taken aback when he was presented with a boxed-up product ready for release. Jacquetin and colleagues later carried out a study in 40 patients, which found success rates of 77% two months after surgery, compared to the roughly 85-90% success rate commonly reported for Ethicon’s original TVT mesh device. 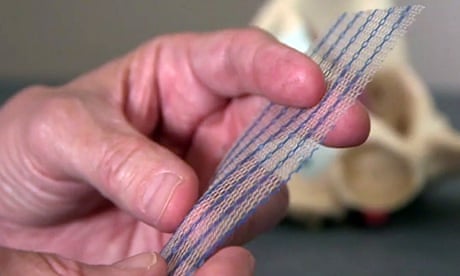 On learning that Jacquetin’s results did not look promising (though not referring to the eventual 77% figure), marketing manager, Fabrice Degeneve emailed his superiors to ask: “How should we handle this without compromising the use of this new technique?”

Ethicon’s director of sales, Xavier Buchon, replied: “This is for sure a big concern,” before suggesting withholding results while the company reviewed the patients to be included in the analysis. “No way to hide the truth but to make sure it has been done correctly in terms of procedure and inclusion,” he added.

In the event, the findings were presented at a major international conference and Jacquetin said he never felt pressure to bury unfavourable results. But he adds: “I was really disappointed. I told many people at Ethicon it was not [a good device].”

In 2012, TVT-Secur was withdrawn from the market, along with three other mesh products. J&J declined to provide exact figures on how many women had received the implants.

In other emails, J&J staff complain of colleagues “constantly spinning data” and of a dangerous blurring of the “lines between commercial and research” divisions. “I am continually amazed and surprised at our need to push back,” wrote Judi Gauld, Ethicon’s former clinical director in Scotland.

Other emails show a blasé attitude to distressing complications. In one, dated from 2003, a surgeon sought advice on treating a patient with a 2cm stretch of mesh poking through her vaginal wall. “Sex is like screwing a wire brush according to her spouse,” the doctor wrote. Martin Weisberg, Ethicon’s medical director, replied: “I’ve never tried the wire brush thing so I won’t comment.”

Following the trial, Ebaugh’s lawyer, Kila Baldwin, said in a statement: “I am pleased the jury recognised the recklessness of J&J and I hope the company takes notice of the verdict and adjusts its practices accordingly.”

Johnson & Johnson said they plan to appeal the verdict. In a statement, the company said: “We believe the evidence in the Ebaugh trial showed Ethicon’s TVT and TVT-Secur devices were properly designed, Ethicon acted appropriately and responsibly in the research, development and marketing of the products, and the products were not the cause of the plaintiff’s continuing medical problems.

“Over two and a half million documents have been provided to plaintiff attorneys by Ethicon as part of the pelvic mesh litigation in the United States, and selective disclosure of certain sentences or documents without proper context can be extremely misleading