With the energetic recital of humanitarian songs from “Republican Panther”, a Mumbai based Dalit and Human rights cultural organisation, the meeting to condemn Israeli act of genocide in Palestine has accelerated amidst the wetly evening of 19th July, in Mumbai.

Mumbai, extending its tradition of protest and solidarity for the cause of humanity, the three hours long meeting has been organised to condemn Israel’s genocidal act onto Palestinian people. The meeting has organised at Shahu Shabhgruh, Dadar, Mumbai. It has organised by “India Palestine Solidarity Forum” which had been initiated by Feroz Mithiborwala (a veteran secular human rights activist) and Kishor Jagtap from Mumbai. 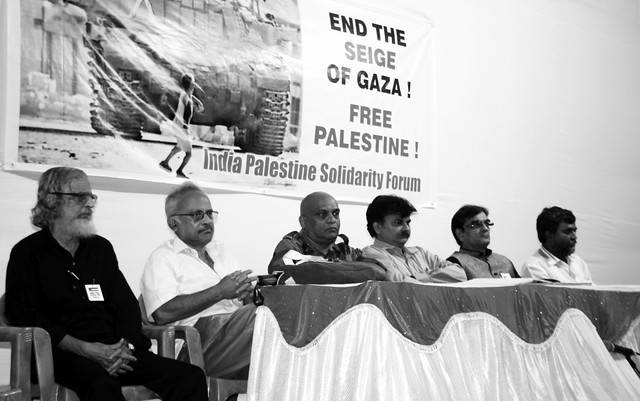 Speakers at the meeting.
The meeting was accompanied by Prakash Reddy of CPI (Communist Party of India), Meraj Siddiqui of Samajwadi Party (SP) and other human rights activists, extending and expressing their support as well as efforts in this humanitarian cause. Talking on how the Israel’s despicable act of genociding Palestinian people wasn’t only threatening to Palestinians but also was the expression of global crisis in the domain of freedom of people and their security, each one of speakers had seemed to despised and condemned the act of genocide of Palestinian people.

Kishor Jagtap, who is Mumbai based veteran Dalit and human rights activist went on to say, “I want to condemn Nobel Peace Laureates also s they seemed to bury their tongues into their mouth on this issues”. 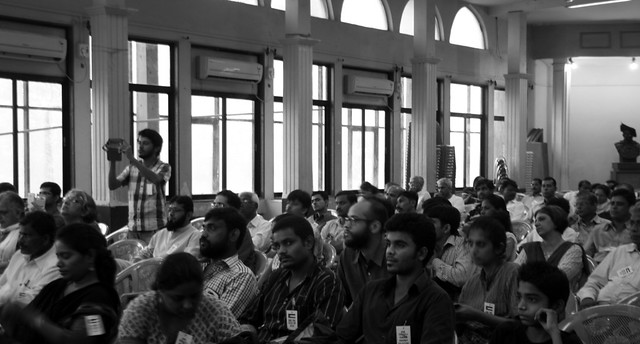 Crowd at the meeting
On the other hand, Meraj Siddiqui who was from Samajwadi Party, said that he did not feel so hopeless even when TISS (Tata Institute of Social Science) study survey had shown the miserable condition of Muslims youths in Jail settings in Maharashtra, as much as he was feeling now looking at the deliberate silence on the Palestinian cause from the society. He also said that this brutal act of Israel cannot be called war, as it was the clear-cut act of genociding Palestinian people.

Despite many expressions, all stood in solidarity with Palestine, the hall was also filled by many youth, which few speakers depicted as the symbol of protest and concern for humanity, although small, but was still alive.