Tales From The 4G Rumour Mill

Fear is trending and violence is a ping away, why does fake news make India erupt?
DOLA MITRA 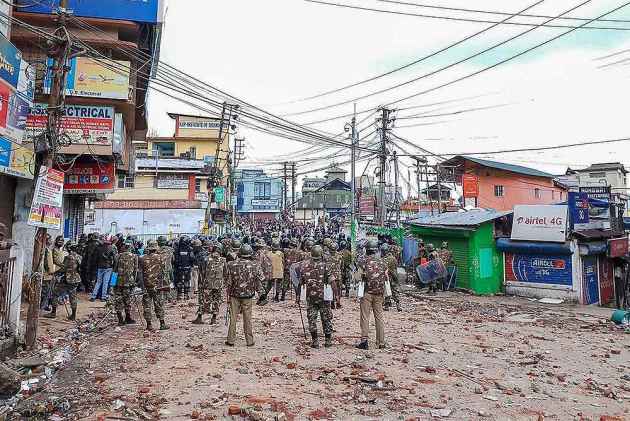 It came out of nowhere—no sour­ces cited, no eyewitness accounts, yet it spread all over the internet and suddenly, it was social media breaking news: a tribal man had been killed following an argument with a bus conductor, who belonged to another community. In no time, a usually laidback Shillong was in the grip of both fear and rage, courtesy, innumerable WhatsApp forwards, Facebook shares and retweets.

No one bothered to check the veracity of the ‘news’ as angry local residents descended on the streets, baying for the blood of their ‘enemies’. When police intervened, they were showered with stones and bricks. Such was the anger that mobs even defied curfew and continued their rampage—pelting stones, attacking religious places, damaging vehicles, anything that came their way.

By now it’s known, Shillong only adds to the list of rumour madness, a growing trend across India. Behind the violent bouts of anarchy are the usual suspects: WhatApp, Facebook, Twitter—social media platforms that can proliferate information like never before. Platforms that offer super-convenience, for all our endeavours, mischief included. 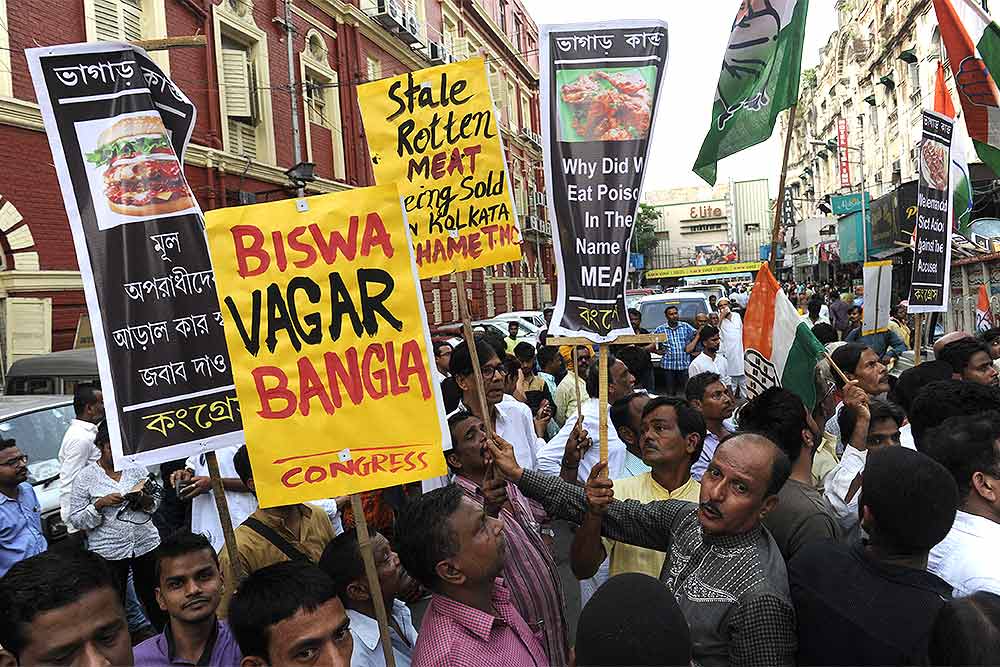 Across the country, several people have died in the recent past due to such fake news, mischievously planted into social media platforms by unidentified people or groups. “Internet hoaxes are driven by a large number of different reasons. Individuals, groups or organisations are often driven by religious ­intolerance to generate rumours about other communities,” says P.K. Das, former officer-in-charge of Calcutta Police’s cybercrime cell.

“Helpless rage on issues beyond their control compels a section of people to group themselves into mobs to take the law into their own hands, when they feel they cannot adequately rely on the ­administration. Other compulsions ­include revenge and even the need to relevant in some way,” he tells Outlook.

Weeks before the Shillong violence, at least six people, all ‘outsiders’, were lynched in Telangana and Andhra Pradesh by local residents, whose ­mobile phones were flooded with messages about gangs of kidnappers. Some of these messages were even circulated as ‘warnings’ by the local police about ‘gangs’, giving a strong ring of legitimacy to the rumours.

Das offers an explanation for the ­online rumour mill: “Individuals are disconnected from society and their interface with the world happens through their computers and smartphones. It creates deep mental chasms. The gratification is immense when they inject into cyberspace something sensational and it becomes a talking point, with hundreds of people clicking and liking their post.”

Calcutta has been another epicentre of fake news recently. Since it has to do with the city’s meat, it has impacted everyone—businesses, the administration and the common man. But before the “dog meat” scare came the “plastic egg” scare, almost as if to test the wat­ers for the city’s rumour potential.

On a cool evening towards the end of 2017, news channels were streaming a video of a Calcutta homemaker holding up a lit matchstick to an egg, which was melting like wax onto a plate on her dining table. She alleged that it was made of plastic. In the subsequent weeks, the city’s poultry traders ­reported drastic drops in the sale of eggs. The scare lasted a few weeks and ended only after the state administration declared that it was a rumour. 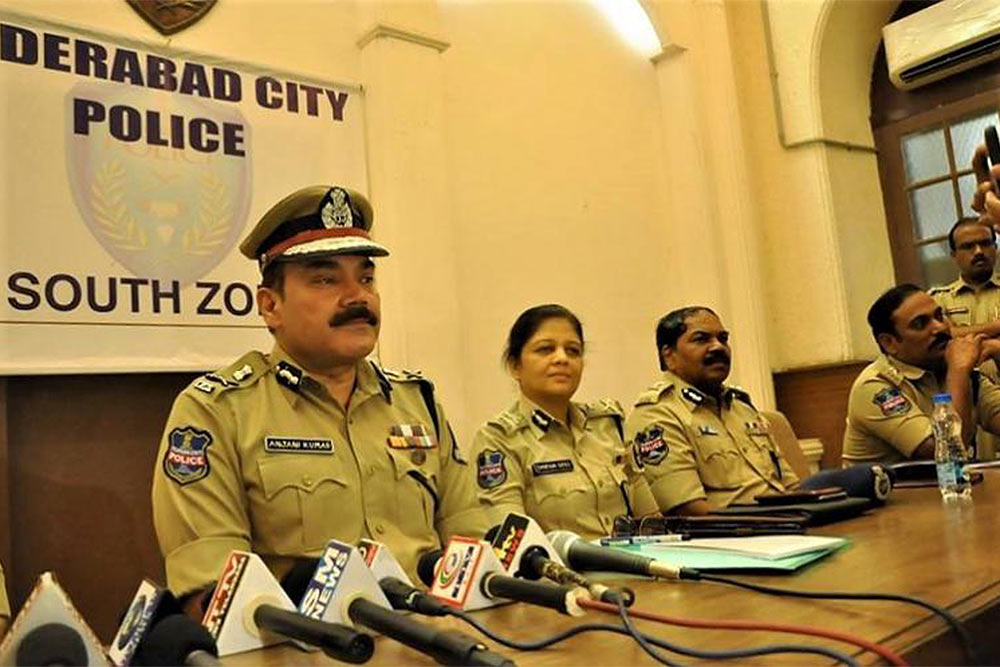 Hyderabad Police chief after the recent ­lynchings, asks people not to believe in social media rumours

A few days later, another, purposefully gross, video surfaced showing the production process of fake eggs—a drop of yellow food colour congealing into a yolk before being stuck into a thin, transparent, plastic egg-shell shaped sheet. “How are we supposed to distinguish between real and fake while buying food anymore?” says a homemaker, a mother of a ten-year-old child in Calcutta. She hasn’t just stopped giving her son eggs but is also on the verge of banning meat from the house following another massive scare which has taken over Calcutta: about the “bhagarer mangsho”, or mea­t­ culled from the carcasses of dead, wasteland animals.

Throughout April and May news channels carried reports of how meat from dead chickens, even cows, dogs and pigs was being “processed” by ­dubious operators and sent to the city’s eateries. Amid an outrage, police identified and arrested one of the kingpins, a man named Bishu, who is now being called “mangsho (meat) Bishu”.

Though some of the allegations were true, the distribution of such meat was limited. But that did not stop huge numbers of consumers from boycotting chicken and meat. Abdur Rezzak Mollah, West Bengal minister in charge of the department of food processing industries, said that while the rumours could indeed be based on some real occurrences, the magnitude of public panic or outrage was far overplayed.

“No one can claim that illegal businesses, including those which are ­involved in fake food production, are not burgeoning not just in West Bengal or the rest of the country but across the world,” says Rezzak. “However, to allow these stray incidents to have such an impact as to cripple normal life is a matter of concern.” Rezzak does not just hold fake news sites on social media ­responsible for spreading paranoia but even mainstream media , which shows news without checking the sources.

Beverages including colas of multinational brands have been at the receiving end of numerous smear campaigns, allegedly by rival companies. Though the health hazards of aerated drinks are widely accepted, a recent video which went viral on WhatsApp showed two popular drinks using “bathroom-cleaning chemicals” as an ingredient. The video sparked panic among a section of consumers. The rumour was eventually contained, but not before it could do some damage.

Over the last few years, rumours and fake news with political and religious colour have been circulating almost on a daily basis, pitting communities or caste groups against each other. Such has been the menace that the government is now contemplating stricter laws to clamp down on fake news. In India, which is reportedly one of the world’s biggest WhatsApp’s markets, the spread of rumour viruses is far reaching and it seems to be mutating, appearing ceaselessly in various avatars.

In the latest instance, it has sprung up around the Nipah virus which has claimed several lives in Kerala. When the disease struck the state late in May, a fresh round of scare-mongering ­infected the Internet. The initial ­onslaught of advisory messages forbid the public from partaking of ripe fruits which could have been bitten by bats, which were initially thought to be the carriers of the virus, along with pigs. But at a national level, the messages soon became more offensive, advocating as they did, the ostracisation of Kerala and its residents. The state administration had to issue reassurances that the ­outbreak had been contained and ­managed to dispel fears.

Within Kerala itself, another cause for concern for the administration were the hate rumours that were flooding the ­inboxes of the state’s users—that ­migrant workers from Bangladesh and other states had brought the Nipah virus to the state. Worried that its 40-lakh migrant ­labour workforce would be targeted, the administration had to step in to dispel the xenophobic myths. This it is not the first time that Kerala’s ­migrant labour force had been the subject of rumours. In October 2017, hundreds of migrant labourers fled Kerala when rumours floated that their lives were in danger. Fake messages circulated on WhatsApp said that a ­migrant labourer from West Bengal was beaten to death in the state while others said that Hindi-speaking people were being attacked by locals. That was enough for this floating, vulnerable population to panic and an exodus began. Newspapers reports say that many of the labourers didn’t even ­collect their wages, they just fled  the state without informing their employers. Chief minister Pinarayi Vijayan had to step in to condemn the rumours. Vijayan called the rumour mongers “mad” for spreading the cruel messages. His choice of word was not without a reason.

When Kerala was in the vortex of a ­crisis after Cyclone Ockhi grazed the coast last year, another rumour hit. Hundreds of fishermen out at sea had gone missing. As the state struggled with the rescue efforts, a WhatsApp message claimed that nearly 60 fishermen were rescued by a Japanese merchant ship that was heading towards Vizhinjam port. As the state rejoiced following the news, relatives of the missing fishermen took taxis and rushed to the port to receive them while ambulances were at the ready to rush the rescued to the hospital. But there was no Japanese ship nor any rescued fishermen at the port, causing anger among the relatives and huge embarrassment to the state government. Even the district collector of Thiruvananthapuram and the fisheries minister were taken in by the fake messages.

By Dola Mitra in Calcutta