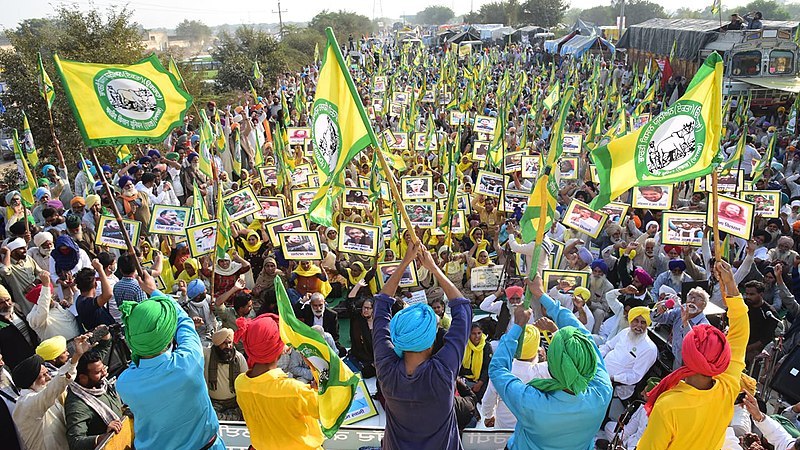 The programme will be celebrated on large scale in Odisha Andhra Pradesh, Telangana, Uttar Pradesh and Bengal.

Today, June 30th 2021, will be marked as Hool Kranti Diwas in all the morchas in Delhi.

Also known as the Santhal Rebellion, the Hool Kranti was the Santhals’ resistance in modern-day Jharkhand against the East India Company, the usury and the zamindari systems.

The Hool Kranti preceded the First War of Indian Independence. It was a rebellion mounted by the Santhals, led by Sidhu and Kanhu Murmu, which was fought on a uniquely indigenous value system admired by the enemy too.

Samyukt Kisan Morcha pays respects to the Adivasis of India, who fought many battles to keep the country free from exploitation and injustice, and to protect the livelihood resources of communities. They are an inspiration and part of this movement too.

Today’s farmers’ movement also rests on honor and dignity of farmers, patience, hope, perseverance and peace, in the farmers’ resistance against injustice and corporate control.

The programme will be celebrated on large scale in Odisha Andhra Pradesh, Telangana, Uttar Pradesh and Bengal.

The impact of farmers movement is being felt by BJP as its own leaders are concerned about the laws, or about the Party’s future consequent to the farmers’ agitation.

Yesterday, Sampat Singh, a former Minister in Haryana turned down a post in the BJP Haryana State Executive Committee, by writing a letter to the Haryana BJP President OP Dhankar, and making the letter public. In this, he explicitly referred to the farmers’ agitation and expressed his support to the agitation. He also pointed to the heavy social boycott and protests being faced by the party everywhere in the state. He stated that politics cannot be run from closed rooms with police security.

In Punjab too, several misgivings were expressed by senior BJP leaders in the state about the party and government not resolving farmers’ issues.

In Uttar Pradesh, BJP leaders’ assessment in the run up to the elections is around impact of farmers’ agitation on the ground, as it calculates vote bank setback. All of this indicates that the government is clearly standing on ego, ignoring its own party members too on the matter of farmers’ agitation, while the party is worried about poll prospects.

Government of India has put out a Consultation Paper on IDEA (India Digital Ecosystem of Agriculture) for “transforming agriculture”.

Farmers organisations have said that it is one more agenda to facilitate businesses of corporations in the name of farmers’ incomes or interests, and one more process that has violated democratic consultative processes. MoUs have been signed with several corporations like Microsoft and Patanjali, with no basis for selecting particular entities for particular pilots.

The IDEA implementation has begun without a Data Protection Legislation in place and with questions that arise about farmers’ data sovereignty, privacy and consent.

The whole IDEA architecture is also resting on land records digitisation, when digitised land records themselves have numerous deficiencies that got compounded with regard to ground level land ownership and records related problems for many farmers.

Farmers’ groups are opposed to such rushed, undemocratic approaches of the Government, on issues that will become serious survival and livelihoods issues for most farmers of the country.

SKM acknowledges humbly that the current movement consists of the power of extra-ordinary individuals and their commitment to the cause. One such person is Gursewak Singh from Jaito. He is differently abled and cannot walk. He is headed to Tikri Border on his tricycle to join other protesting farmers.

A Kisan Mahapanchayat was organised today at Charkhi Dadri in Haryana with an impressive turnout, with many SKM leaders participating in the same.