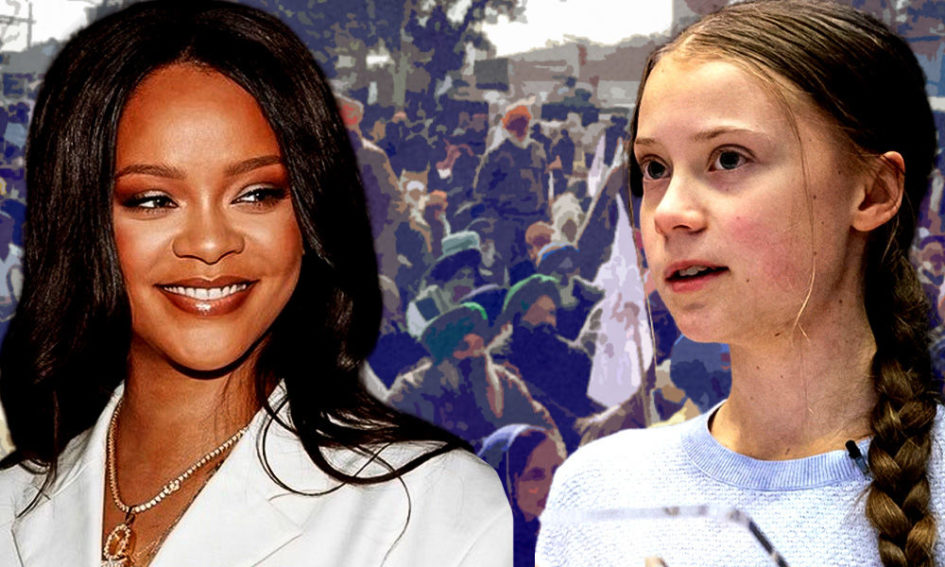 As the farmers’ protest continues to intensify in India, International pop star Rihanna and climate activist Greta Thunberg took to Twitter to extend their support to the farmers protesting on the outskirts of Delhi, condemning the internet shutdown.

Rihanna/Facebook As the farmers’ protest continue to intensify in India, International pop star Rihanna on Tuesday, February 2, took to Twitter to extend her support to the farmers protesting on the outskirts of Delhi against the centre’s contentious farm laws, condemning the internet shutdown aimed at restricting the movement.

Internet services in the Delhi’s border areas of Singhu, Ghazipur and Tikri were suspended on Saturday, January 30 and the shutdown was extended twice till at least 5 pm Wednesday, February 3.

Climate activist Greta Thunberg also came out in support of the farmers’ protest at Delhi borders against the three farm laws. UK Member of Parliament Claudia Webbe also expressed solidarity with the Indian farmers. “Solidarity to the Indian Farmers. Thank you Rihanna.

In an era where political leadership is lacking we are grateful for others stepping forward,” she wrote, sharing a screenshot of Rihanna’s tweet. The tweets by the international pop star and the 18-year-old climate activist were widely shared on social media and received mixed responses.

Reacting to Rihanna’s tweet, Bollywood actress Kangana Ranaut attacked the singer for supporting the farmers, alleged that she was trying to divide India and called the singer a “fool”.

While some came out in support of international attention, others criticised the singer and the young climate activist and said that India is not answerable to them.

Indian-Canadian Youtube star Lilly Singh thanked Rihanna for tweeting in support of the ongoing farmers’ protest in India. Some even called it a “global left-liberal circuit that seeks to destabilize India is.”

Netizens also called out members of the Bollywood industry for remaining silent on the farmers’ protest.

Meanwhile, thousands of farmers who have been protesting in Delhi’s NCR have now called for a nationwide agitation on February 6 demanding withdrawal of the controversial farm laws.

Locked In A Dark Room By Her Family For 20 Years, Woman Rescued #Vaw
India - 55,000 trees to be axed for second Goa airport #WTFnews
The LGBT page has disappeared from the White House's website
Why its hard to accept the killing of Mohsin Sheikh in Pune