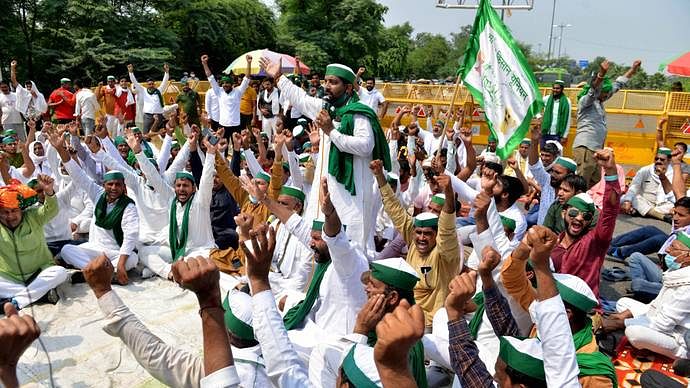 With farmers intensifying their agitation against the three farm laws, residents of several villages in Baghpat have banned the entry of political parties and farmers’ associations who have voiced support for the contentious laws.

The decision was taken by the Panchayat of 36 castes held in Baghpat recently.

“Anyone who is not in favour of the farm laws is not welcome in these villages. If you want entry in the villages, show your loyalty to the farmers, not to the government,” pradhan of Saroorpur Kala village Jeet Singh said on Friday.

He said that in the Panchayat held on Wednesday, members had unanimously decided to ban entry of political parties and farmers’ organisations which are not in support of the farmers’ agitation. “We do not want to share food and place with those who have an anti-farmer mentality,” Singh said.

The villagers said that they have nothing to do with any political party. “We are farmers and we support farmers who are staging protests for the last many months – first in Punjab and now in Delhi. We disown those who are talking the language of the government,” Tejveer Singh, a former pradhan said.

The farmers are continuing with their agitation in Baraut in Baghpat which entered its 30th day on Friday. Farmers across western Uttar Pradesh are staging protests. They have collected around Rs 5 lakh in the form of chanda to sustain the agitation.

In a change of strategy, agitating farmers are now holding protests at different places to motivate the farmers. On Thursday, the divisional president of Bharatiya Kisan (BKU) Padam Singh held a day-long dharna at Meerut cantonment station while on Friday, a similar protest is being held in Saharanpur. On Saturday a dharna will be held at Bijnor followed by protests at Hapur.

The BKU has asked its district units to hold chaupals in different villages to educate farmers why they are opposing the farm laws. The decision was taken after the BJP sent its cadres to the villages carrying booklets containing propaganda to justify the farm laws.

“Some political parties are spreading lies. We have started countering them,” Pritam Singh, a BKU leader, said

#India- Jabalpur High Court orders to include Pardhis as witnesses in Rapecase #goodnews
#Budget2014 - Health components of Union budget 2014-15
India - Treated 'worse than animals': thousands of women feared trapped in ashrams
The inheritors of Naxalism should lay down their arms and challenge the ruling class to abide by the...