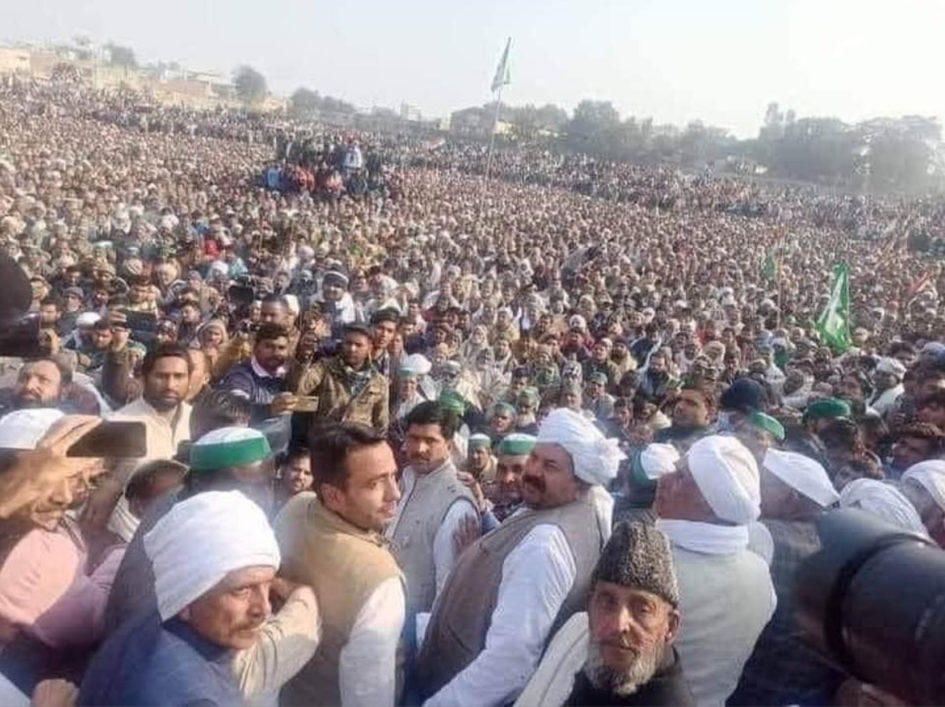 In the wake of the sponsored conspiracy of violence on Republic Day,the Modi regime has begun a massive crackdown on the historic farmers’ struggle, which will soon complete 75 days. The government and its police have now turned the three farmers’ protest sites at Singhu, Tikri and Ghazipur into open jails. The ‘annadatas’ of our country are being treated as foreign invaders. No other central government in independent India has ever done this near the national capital itself.

But it is a glorious tribute to this unprecedented farmers’ struggle that it has not only withstood this multi-fanged state repression, but has in fact increased its defiant resistance massively over the last one week.

Thousands of new farmers, men, women and even children, are thronging all the five borders around Delhi, including the Shahjahanpur and Palwal borders, every day. Maha Panchayats of tens of thousands of farmers are being held in Uttar Pradesh, Haryana, Punjab, Madhya Pradesh and Rajasthan. Huge meetings are being held at the freed toll plazas in Haryana and elsewhere. All of them are giving clarion calls to strengthen the struggle manifold.

The Samyukta Kisan Morcha (SKM) has given a call for a nationwide Chakka Jaam (Road Blockade) between 12 noon and 3 pm on February 6, to denounce this repression by the central government on the farmers of our country. Lakhs of farmers from all over the country will block both national highways and state highways on that day.

The All India Kisan Sangharsh Coordination Committee (AIKSCC) has called for a week-long campaign From February 3 to 10 in villages across the country against this repression.

Lakhs of electricity employees led by the National Coordination Committee of Electricity Employees and Engineers, a broad based united platform of all national federations, observed a one-day total national strike on February 3. The Central Trade Unions (CTUs), the AIKSCC and the AIKS fully supported this strike and held solidarity actions.

State repression began immediately after the government-managed violence at the Red Fort and elsewhere on January 26. The Delhi police have filed 44 FIRs against hundreds of farmers and their leaders. 122 farmers from Punjab and Haryana have been arrested. 16 of them are below 20 years of age, while 10 are over 50 years of age.

The youngest is 18 year-old Deepak from Kaithal and the oldest is 80 year-old Gurmukh Singh, a small farmer owning one and a half acre of land in Samaspur village in Fatehgarh Sahib district of Punjab. He served loyally in the Indian Army and retired over three decades ago.

Over 30 protesters are still missing and habeas corpus petitions will be filed to locate them. Several tractors have been confiscated and notices sent to their owners. Look out notices have been sent to over 60 farmer leaders.

On January 28, hundreds of police personnel and RSS-BJP goons started intimidating the farmers there. AIKS General Secretary Hannan Mollah, Joint Secretaries K K Ragesh, MP and Badal Saroj, and Finance Secretary P Krishna Prasad visited there to ensure full support. BKU leader Rakesh Tikait, AIKS senior leader from Uttar Pradesh D P Singh and others have been holding the fort at Ghazipur for the last two months. It was then that BKU leader Rakesh Tikait made his now-famous emotional appeal in front of the media. This galvanized the peasantry in UP, Haryana and elsewhere. It was this that turned the tide and thousands of peasants from these states started pouring in at Ghazipur.

At Singhu, Tikri and Shahjahanpur borders, the BJP-RSS tried a new tack. They brought in hundreds of their goons who posed as ‘locals’. With police support, they started condemning the desecration at the Red Fort, began their stone-throwing attacks on farmers and ordered them to vacate. They were beaten back by the resilient farmers.

These incidents had a massive reaction in Punjab, Haryana and Rajasthan, from where again thousands of new farmers started pouring into all these three borders. The notorious conspiracy to break the unity of the farmers of India on religious grounds by hoisting the Sikh flag at the Red Fort, thus trying to isolate and target the valiant Punjab peasantry, was resoundingly smashed.

On the evening of January 31, goons attacked the Kisan dharna at Gwalior in Madhya Pradesh. Many people including AIDWA district secretary Preeti Singh and SFI CEC member Akanksha Dhakad were injured in the attack. The goons who led the attack also tore up photos of Shaheed Bhagat Singh, Dr Babasaheb Ambedkar and other icons at the venue. Now the farmers and people of Gwalior have hit back and huge protests have begun in support of the farmers struggle there.

The magnificent farmers’ struggle was not only saved, but was vastly strengthened by the peasantry of India acting in unison, transcending the barriers of religion, caste, language and also gender.

Indeed, one of the most distinctive features of the peasant mobilization after January 26 is the massive participation of thousands of women not only at the protest borders but also in the innumerable Maha Panchayats and toll plaza public meetings are being held in UP, Haryana, Rajasthan, MP and Punjab. Several such huge public meetings of thousands of women and men at the toll plazas in Hisar and Jind districts of Haryana on February 2. The other great achievement of this struggle is the gradual loosening of caste and religious barriers and the coming together of people who were always socially apart traditionally. This is evident in thousands of villages. It is an inspiring glimpse of what can happen if peasants and workers come together as a class.

The Godi media and right wing hacks, who had begun triumphantly writing the obituary of the farmers struggle from January 26, were thrown on the defensive and had to eat humble pie.

After this slap in the face, the regime is now wreaking its vengeance on farmers by turning their protest sites into open jails. All the protest sites are now surrounded by multiple rows of barbed wire, iron spikes, concrete barriers, trenches and razor wire. Such a vicious attack is unheard of.

Water and electricity connections have been cut off. Mobile toilets have been removed. Hundreds of local and commando units of the Delhi, UP and Haryana police, topped by a Rapid Action Force, have been stationed at all these protest borders.

Internet services at all the borders and also in several districts of Haryana, have been suspended, creating innumerable difficulties for the people. Twitter handles of some farmer unions have been blocked at the instance of the Union Home Ministry.

But the defiant resistance of farmers has only been strengthened by this government and police onslaught. Villages upon villages are coming forward with water tankers, food and all other essentials to sustain the farmers in their struggle against all these formidable odds. Several Gurudwaras and the langars that they have been running tirelessly have played a truly magnificent role in this struggle for the last two and a half months. A people united can never be defeated. That is the true lesson of this iconic peasant struggle.