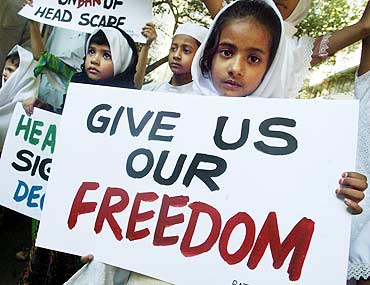 The Supreme Court on 7th July 2014 ruled that fatwas had no legal sanctity and the defiance of fatwas would not have civil or criminal consequences as it had no place in independent India under our constitutional scheme. Though the Apex Court did not injunct Islamic religious authorities like the Dar-ul-Uloom Deoband, Dar-ul-Qaza or Nizam-e-Qaza from issuing fatwa as issuance of fatwas per se were not illegal in its opinion, it clarified that “it is not a decree, not binding on the court or the state or the individual. It is not sanctioned under our constitutional scheme”.

The Supreme Court seems to have taken balanced view by clarifying that the fatwas may be issued by any religious authority or individual but it cannot be enforced and the courts would disregard it. The Apex Court cannot prevent anybody form expressing her/his religious views as Article 25 of the Constitution guarantees freedom of every person to freely profess, practice and propagate religion of her/his choice. Those views however cannot be enforced on a third person through any means. However, given the state of literacy, education and socio-economic backwardness of the community, lack of security, having very limited access to secular institutions, the poor in the community take the opinion of the even improperly trained imams (prayer leaders of the mosque) are prone to accept fatwas as divine law. Religious organizations and institutions play prominent role in their daily lives providing solace and support. Women are more vulnerable given the patriarchal values and huge gender based inequality within the community. A bizarre fatwa was issued by the imam of a mosque in Assam. A woman shared her husband’s dream in which he pronounced the word talaq (divorce) thrice with her neighbour. Both – husband and wife had laughed off the dream. The dream was reported by the neighbour to the imam who promptly issued fatwa that such a pronouncement even in a dream amounted to irrevocable divorce and the husband and wife were haram (prohibited) to each other and must separate immediately. Such a ridiculous fatwa also carried weight for the community and can cause irreparable damage. There is no homogeneity in fatwas and often contradictory fatwas are issued by muftis and imams based on one of the four school of jurisprudence they belong to – Hanafi, Hanbali, Shafi or Maliki among the Sunnis or a Shia Ulema would follow their respective jurisprudence, viz. Ja’fri, Ismaili or Zaidi.

There is lot of misunderstanding about fatwas. Fatwa and mediation in matrimonial disputes are separate issues. The former is done by Dar-ul Ifta whereas the latter is done by Dar-ul-Qaza or Nizam-e-Qaza and often by biradari based mediations. Mediation by Dar-ul-Qaza is often popularly referred to as shari’ adalat or sharia courts. The petitioner – Adv. Vishwa Lochan Madan had approached Supreme Court with a prayer to ban the shari’a courts, qazis, naib qazis from functioning and thereby dictating social behaviour of citizens.

Fatwa in Arabic literarily means opinion. Fatwa is opinion of the issuer on some issue of shari’a or the other. As there is no clergy in Islam, the opinion is not binding, howsoever learned and qualified the issuer of the fatwa may have been. A fatwa issued by Dar-ul Ifta normally ends with the words “but Allah knows better” after the opinion is expressed. These words itself shows that the issues accepts the opinion expressed in the fatwa to be his best judgment on the issue, but not binding, as Allah knows better than him.

Fatwa is issued in response to a query about matters relating to everyday life in accordance with shari’a. The query may emanate from any person, even a third person unconcerned with the query. Often journalists approach a local imam of a mosque with minimum training in Islamic religious affairs for his opinion on matter pertaining to a third person. The objective may not be to educate himself with the opinion of the maulvi but to publish the “fatwa” later for TRP of his channel or increase the sale of his paper. Other media then pick up and discuss the “fatwa” for days and weeks if not months. Fatwa on Imrana was sought by a journalist and not by Imrana or her husband or Imrana’s rapist father-in-law.

Fatwa can only be given by Islamic scholars on the basis of Islamic law. The persons authorised to give fatwas hold position of mufti. Person issuing fatwa should have pure intention to guide the seeker of fatwa; he should have deep insight; equanimity and tranquillity; he should have a firm religious background and deep knowledge and should be aware of daily life and contemporary issues. Allama Iqbal suggested in his Reconstruction of Religious Thought in Islam that every generation of Muslims should re-think the issues and legislate according to their own needs. Poorly paid imams of mosques in rural area often do not meet these qualifications. They are not men of vision nor understand the issues involved and follow the rule book mechanically. A fatwa encompasses every aspect of life such as creed, worship, transactions, the economy, family, politics, governance, etc.

A fatwa may relate to a individual’s conduct or to the community as a whole. Maulana Hussain Ahmad Madani collected 100 fatwas issued by Ulemas of various sects against partition of the country and published the compilation. Madani argued that it was sin to call a geographical area as “pak” or holy as the Muslim country was sought to be called Pakistan. Allah’s entire creation was holy. He also argued that the first state which the Prophet of Islam built was based on the concept of composite nationalism as in the Madinese covenant, the Muslims, Christians and Jews agreed to jointly defend Madina if attacked by its enemies but at the same time, all were free to follow their faith and religion. Indian nationalism too was composite with all faiths co-existing and flourishing and Muslims enjoyed freedom of conscience. He toured length and breadth of the country addressing public meetings and educating Muslims that it was their religious duty to oppose creation of Pakistan.

Similarly there have been numerous fatwas to oppose terrorism targeting innocents issued by Ulama in India as well as others in Islamic world. In the Mardin conference 15 leading scholars from countries including Saudi Arabia, Turkey, India, Senegal, Kuwait, Iran, Morocco and Indonesia gathered. Among them were Bosnian Grand Mufti Mustafa Ceric, Sheikh Abdullah bin Bayyah of Mauritania and Yemeni Sheikh Habib Ali al-Jifri and rejected the earlier fatwa of Imam Ibn Taimiyyah that was used by Osama bin Laden and his followers in support of their jihad. Imam Ibn Taimiyyah’s fatwa justified use of violence against an unjust ruler in the circumstances when the only way to address injustice and to bring about regime change was to use counter violence. Imam Hanbal had prohibited rebellion against an unjust ruler as it would promote anarchy and bloodshed. The Mardin conference rejected mindless violence targeting innocents and non-combatants condemned terrorism. In a democracy other means of changing unjust regimes is possible. Such fatwas merit little attention in the media – both, for the lack of knowledge, and because they go against the conventional wisdom that Islam is a backward, violent and aggressive religion. Media also thrives on negative news. Coverage of conflicts rather than events that are conducive to harmony and peace increase the TRPs.

However, everything is not hunky dory within the community. The Muftis issuing fatwas mechanically follow the rules of their respective jurisprudence without applying their mind to the changed context and circumstances in which the fatwas are sought. To be fair to the Dar ’ul Ifta, the problem lies with the fact that the doors of ijtehad (creative interpretation and application of teachings of Islam to changed circumstances) have been closed during the medieval period itself. In India, Islamic jurisprudence was an evolving science till the colonization of the country under British. The Warren Hastings’ Plan of 1772 provided for establishment of civil and criminal courts and protected the right of Hindus and Muslims to apply their own personal laws in inheritance, marriage etc. In the year 1791 under directions of Hastings, Charles Hamilton translated from Arabic the Hedaya (The Guide) into English. With the reliance of the British courts on written text, the evolution of shari’a came to a halt. Darul Uloom Deoband was established by Maulana Muhammad Qasim Nanotvi and others to conserve the faith against the possible western onslaught.

Since then, the fatwas issued by the Darul Ifta established by Darul Uloom have been drawing from wahabi conservative Islam and Hanafi School of jurisprudence. Muslim Women have been worst sufferers as the conservative fatwas restrict their freedom and liberties. Women in the fatwas are conceived as duty bearers towards their husbands having little rights. Moreover, the fatwas enable men to exercise considerable control over the bodies of their wives and control their movement reducing them to object for sexual gratification for their husbands, bearing them children and carrying out domestic chores. Needless to say this does not necessarily reflect the true spirit of Islam. Dr. Asghar Ali Engineer would argue that Holy Quran gives equal rights to Muslim women and complete freedom to earn their livelihood, right to manage their earnings and use it as they please without any obligation, right to maintenance from their husbands, wear clothes they liked except they were require them not to display their zeenah (bodily charms and adornments), right to unilaterally divorce their husbands (khula), right (nay, duty) to acquire knowledge, right to pray in mosque and even lead mix group of namazis in mosque, liberty to act and officiate as Qazis, etc. For lack of space, we are not giving references.

Recently a fatwa was issued which called women working in establishments with other male colleagues to be haram if their earnings were not necessary to maintain the family, and if it was, they should be covered from head to toe during their working hours! A fatwa was issued banning a popular all-girls Kashmiri band leading to its disbanding. Viewing of most TV channels, listening to Music, etc have been prohibited by fatwas. What was most disturbing was the fatwa that restricted women from entering even sufi dargahs – a most inclusive space. In August 2005, Darul Uloom issued a fatwa forbidding women from voting, and if they must, they should wear a veil. This would of course prohibit them from contesting elections. Thankfully, the community does not always subject themselves to these fatwas.

What should we do?

First of all, we must welcome the Supreme Court Judgment which reminds the Muslim community that though it is not unconstitutional to issue fatwas, they are merely opinions of the issuer and not binding on anybody. The Apex Court has also advised the institutions and persons inclined to issue fatwas, not to do so at the instance of a third person or party unconnected with the opinion to be expressed as there is ample scope for mischief.

We must particularly educate the women in particular and the community in general, particularly in the rural and semi-urban areas, that fawas are not binding, and wherever possible, hold celebratory meetings welcoming the Apex Court judgment on the issue. The courts functioning under the constitutional framework have done far more for Muslim women’s rights and entitlements and without deviating from Islamic principles – be it on the issue of granting maintenance to divorced Muslim women, holding oral pronouncement of divorce in one sitting illegal, custody of children, right of inheritance, protection of Muslim women facing domestic violence etc. Muslim women should utilize all spaces where they get better rights.