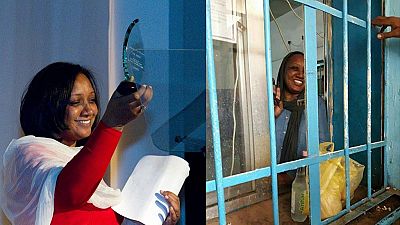 A Sudanese court has sentenced journalist and rights activist Amal Habani to a fine of 10,000 Sudanese Pound (US$1,499) or serve four months in jail on the charge of obstructing public officials.

She refused to pay the fine on Monday and chose to serve the jail term despite offers by other activists to pay for her release, her husband, Shawqi Abdel-Azim, told local media Sudan Tribune.

The complainant is a National Intelligence and Security Services (NISS) agent who claimed to have been stopped from doing his work during the trial of a group of rights activists in Khartoum last year, Sudan Tribune reported.

Amal Habani had said earlier that she was arrested, manhandled and detained by the security agents who had no identification and had accused her of taking pictures of them during the trial.

A NISS officer slapped me on my face, and I was released after two hours of detention and they gave me back my mobile phone.

“A NISS officer slapped me on my face, and I was released after two hours of detention and they gave me back my mobile phone,” she was quoted by the website.

Journalists in Sudan have faced a lot of censorship in Sudan including arrests. In February last year, the NISS agents seized print runs of 14 newspapers without stating reasons for their actions.

On Monday, the NISS seized copies of two sports newspapers for publishing stories on the ongoing crisis of the Sudan Football Association (SFA) after decision by FIFA to suspend the sporting body.

On several occasions the media watchdog, Reporters Without Borders has denounced the attitude of the National Intelligence and Security Services.

NGOs have also called on Sudanese authorities to check these measures considered as a serious infringement on freedom of speech.

Sudan is 174 out of 180 in the 2017 World Press Freedom Index placing the country as one of the worst in terms of press freedom.

How can you mandate Aadhaar-mobile linking without our order? SC asks govt #FacePalm
Dangerous little things- An account of turning political
No country for the Rohingya
Fake pesticides endanger crops and human health in India #WTFnews