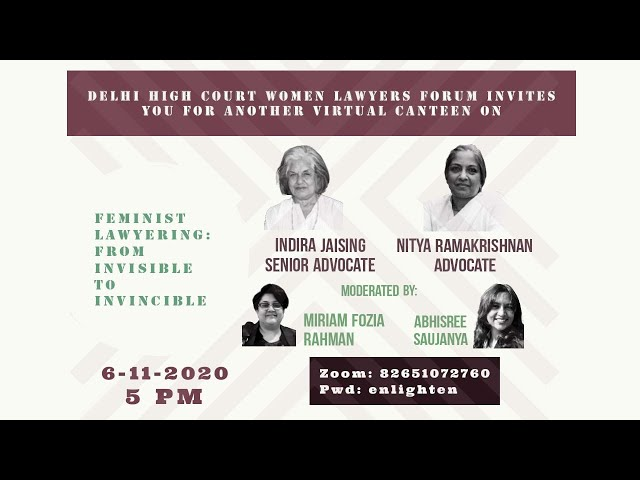 “Feminist lawyering is an effective mechanism by which diverse perspectives and opinions of all the female members of the bar can come together to formulate gender-neutral laws,” said Advocate Abisree Saujanya.

Feminist Lawyering is based on reworking the law to make it more inclusive, accommodating and humane.

Senior Advocate Indira Jaising said, “Feminist Lawyering doesn’t mean espousing for the cause of women alone.” Feminism and one’s biological sex must not be conflated with each other.

Quoting Justice D Y Chandrachud on the question of reservation and equality, Jaising said, “For equality to be truly effective or substantive the principle must recognise existing equalities.”

She recalled that during the Sabarimala hearing, the respondents couldn’t even bring themselves to say the word “menstruation”, referring to it as “that thing that happens to women”.

The Sabarimala case is one of the most difficult and challenging cases she argued.

“Society fears the reproductive capability of women and the only one way to keep them in check is that they marry endogamously within their own caste and they do not cross these limits,” said Jaising.

She recalled that during the Sabarimala hearing, the respondents couldn’t even bring themselves to say the word ‘menstruation’, referring to it as ‘that thing that happens to women’. “Now in a court of law if you can’t get the word menstruation out of your mouth then how are you going to argue for non-discrimination based on sex?” she asked.

Calling the Narasu Appa Malli case a ghost that needs an exorcism,  Jaising raised the question, “If constitutional law does not apply to personal and family laws, then would you not agree that about 90 percent of the life of women are out of the framework of constitutional justice?”

The challenges to feminist lawyering are not merely restricted to women’s cause but are multifarious. It ranges from abuse of power by the government, suppression of dissent, discrimination against the LGBTQIA+ community etc.

The challenges to feminist lawyering are not merely restricted to women’s cause but are multifarious.

Representation of women in positions of power forms another big challenge and the judiciary being no exception. Further, court infrastructure is itself sexist in nature. Until recently, the Supreme Court had no creche facilities to cater to the needs of lawyers with children.

“No woman should be compelled to choose between motherhood and her profession,” concluded Jaising.

“Women have held up the sky ever since recorded history,” said celebrated author and Senior Advocate Nitya Ramakrishnan. She added, “the history of civilisation can be seen as the history or as the charting of the indomitable feminine spirit.”

There are multiple pockets of reality in our country where feminist discourse is yet to reach.

For Ramakrishnan, invincibility is the invisibility of this reality.

“Feminist lawyering to me first and foremost is the redemption of the spirit of invincibility,” said Ramakrishnan.

She noted that invisibility or visibility may have to do with the position of women in power. Agreeing with Jaising, she said, “It does not necessarily mean that there is a linear progression towards what we may consider feminist conscience. It is certainly indicative of a breakdown of stereotypes. It is a change in the face of the power structure.”

“Feminist lawyering to me first and foremost is the redemption of the spirit of invincibility,” said Ramakrishnan.

As crusaders of justice, we should bring forth what the dominant power has hidden. Things have changed, slowly but steadily, with feminist narratives coming forward and the acknowledgement of the same.

Misogyny is deeply rooted in social media, institutions and so on. Most cases of abuse are on women and their anatomy. The worst form of it is considering the girl child a liability.

The challenge for feminist lawyers is to deal with it not just in courts, but at an attitudinal level.

She called for the deconstruction of the idea of the perennially depressed woman, the insane woman and other such notions of the hysterical and unhinged woman in criminal cases and it must be questioned.

“The most important challenge in terms of visibility, invisibility and invincibility is for us to make visible and foreground the important issues of those women who are unable to access justice,” said Ramakrishnan.

She advised lawyers to look beyond themselves and their careers. She urged them to question what is it that we are articulating.

“Law is a site where conflicting world views are clashing,” added Ramakrishnan.

Patriarchy is not a man vs woman issue but comes linked with issues relating to ethnicity, race, class, the urban-rural divide etc. There is no straitjacket formula. To apply it in a straitjacket manner would be a narrow and male way of looking at the issues.

Ms. Jaising said, “There is an obvious and conscious effort being made by people to sabotage this webinar and it should be taken as a compliment- as a sign that we matter.”

She concluded by saying that the most liberating aspect of feminist theory and feminist lawyering is the possibility of multifarious thought processes and views, an example of which is the reservation for women on which feminists have divided opinions.

The webinar itself was not one without challenges as hijackers disrupted the event at the beginning of the session by trolling the moderators and speakers. Unknown people interrupted the speakers with statements like “Feminism is Cancer” among other things. The organisers acted promptly and removed the trolls. They also announced that a formal complaint will be filed.

Jaising said, “There is an obvious and conscious effort being made by people to sabotage this webinar and it should be taken as a compliment- as a sign that we matter.”

(Amrita S. Nair is the Founder of The Silent Sexism Project and a final year student at the School of Law, CHRIST College. Megha Katheria is a sub-editor at The Leaflet.)