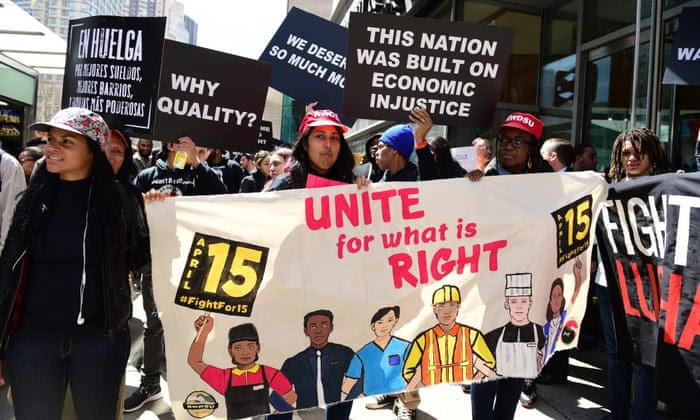 Workers in Atlanta, Boston, New York, Los Angeles and more than 200 cities across the US walked out on their jobs or joined marches and protests on Wednesday during what organisers claimed was the largest protest by low-wage workers in US history.

Some 60,000 workers took part in the Fight for $15 demonstrations, according to the organisers. The protests are calling for a minimum wage of $15 an hour in the US, more than twice the current federal minimum of $7.25.

By late afternoon on the east coast no arrests had been reported, a marked contrast to last May’s action when more than 100 people were arrested during a protest outside McDonald’s Chicago headquarters.

The demonstrations were the latest in a series of strikes that began with fast-food workers in New York in November 2012. The movement has since attracted groups outside the restaurant industry: Wednesday’s protesters included home-care assistants, Walmart workers, child-care aides, airport workers, adjunct professors and other low-wage workers. It also sparked international support, with people protesting against low wages in Brazil, New Zealand and the UK.

The Service Employees International Union (SEIU), one of the largest US unions and representing janitors, security guards, hospital aides and nursing home workers, has bankrolled the campaign, pumping in more than $25m according to documents filed with the US Department of Labor.

Mary Kay Henry, international president of the SEIU, told the Guardian: “There is not a price tag you can put on how this movement has changed the conversation in this country. It is raising wages at the bargaining table. It’s raised wages for 8 million workers. I believe we are forcing a real conversation about how to solve the grossest inequality in our generation. People are sick of wealth at the top and no accountability for corporations.”

Speaking at a protest in San Francisco, Karen Joubert, a nurse, Fight for $15 organizer and a vice-president of representation with the northern California chapter of SEIU, said: “When you pay someone a decent wage, it helps him to get better healthcare and take care of his family.

“Many of our members who work at fast-food restaurants are not college students. They’ve worked there for 12, 15 years. They are working three jobs so that they can raise a family. We want to see them get better wages.”

Gary Chaison, a professor of industrial relations at Clark University in Worcester, Massachusetts, said the protest marked a significant change in labor disputes. “What is really significant about the Fight for $15 movement is – most labor disputes, look inside, they’re about a group of workers covered by a collective bargaining agreement,” said Chaison. “In the Fight for $15, unions are helping to organize on a community basis, a group of workers who are on the fringe of the economy. It’s not about union members protecting themselves. It’s about moving other people up. This is the whole civil rights movement all over again.”

The Fight for $15 movement started with fast-food workers, with a one-day strike by 200 cooks and order-takers, but its strategists have maneuvered to transform it into a broad movement of low-wage workers.

The strikes are fuelling a national debate over low wages in the US. President Barack Obama has been pushing unsuccessfully for a national raise to $10.10. Some cities including Seattle and New York have moved to increase their local rates, and big corporations including McDonald’s and Walmart have announced hikes in their hourly rates.

Janice Fine, a professor of labor relations at Rutgers University in New Brunswick, New Jersey, said the strikes were a way for the labor movement to revamp its role after decades of declines in membership, interest and influence.

“The SEIU reached the point where they realized that things were so bad that if we didn’t have a climate change for unions, the labor movement would melt away along with the polar ice caps; that if we didn’t have climate change in this country about inequality and raising wages, then things were not going to shift for the better,” she said. “The labor movement historically hasn’t organized workers this poor in a very long time. It hasn’t positioned itself as the champion of low-wage workers.”

#India- Bombay HC -'Something is wrong somewhere' #Vaw #Acidattack
We are more than our name: A Gujarati Muslim ponders life under Narendra Modi #mustread
Immediate Release- Stop Privatization of Health Services in Maharashtra
Maharashtra - 40% cut in gender budget allocation, although 48% of women in the state are anaemic