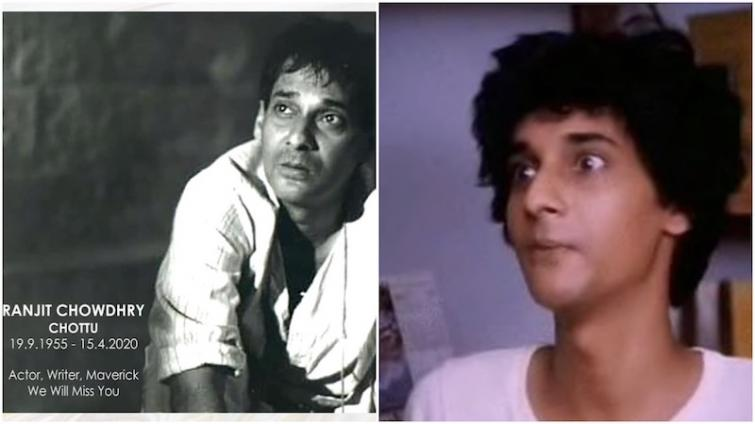 Ranjit Chowdhry, best remembered as the zesty and sharp-witted youngster who looked always in need of a haircut in evergreen middle-class favorites such as Batton Batton Main ‘Khatta Meetha’ and ‘Khubsoorat’, passed away at a Mumbai hospital on Wednesday. He was 64.

At a time when Asian faces were uncommon in the US entertainment industry, Chowdhry also built a moderately successful crossover career. ‘Cosby’, ‘The Office’, ‘Prison Break’, ‘Law & Order’, ‘NYPD Blue’ were some of the popular TV serials he acted in.

The actor, who lived in New York with his wife and 16-yearold son, had come to India for dental treatment some months ago, theatre personality Dolly Thakore told PTI. He was scheduled to return on April 8 but had to stay back due to the lockdown.

His sister, theatre artist Raell Padamsee, shared the news of his death on social media.

“For all those who knew Ranjit, the funeral will be held tomorrow [Thursday] and a gathering to celebrate his life and share his stories on May 5th,” she wrote along with a black-and-white photo of the actor.

Chowdhry was last seen in the movie Breakaway in 2011. Over the course of his career spanning more than 40 years, he starred in movies like Chakra, Kaalia, Lonely in America, Sam and Me, Mississippi Masala, The Night We Never Met, It Could Happen to you, Bandit Queen and Camilla. He also featured in popular American TV show Prison Break

He was ‘my Ranjit’ to everyone he knew

Ranj”, “Jeet”, “Chottu”, “Freako”. Growing up, I knew Ranjit (Chowdhry) on screen. He had acted in films such as Khatta Meetha, Baton Baton Mein and Khoobsurat. He had even acted in Badal Sircar’s play, Evam Indrajit—he acted opposite my mum (Dolly Thakore)—directed by Vikram Kapadia.

Even though he may have played the role of a shopkeeper or taxi driver, he paved the way for the early generation of actors to be featured in American television. The absolute gamut of the work he has done has been incredible. Many people now know him as that recurring character in Cosby or Vikram, the telemarketer in the American TV show, The Office.

He wasn’t a salesman of his own work. He loved cinema, but he had cut his roots in theatre. Not because of his mum (Pearl Padamsee) or dad (Alyque Padamsee), but he really cut his teeth in theatre.

Ranjit was in and around Bombay a lot when I was growing up. When I was a kid, I always found him ‘cool fun’ to hang out with. He always made you feel at ease. He got married and went off to work in Toronto. And I didn’t see him much. Then, when I was 14, I went on my first trip abroad with my father to New York. AP and I were walking on the road, when we heard someone scream, “Alyque”. We were surprised to see Ranjit and he said if he did shout ‘dad’, all of NYC would turn. He had that kind of presence. Within hours of that meeting, Ranjit and I took off. AP loved New York but hated all the touristy stuff. So Ranjit took me to the Empire State Building and Statue of Liberty. We were waiting in the line to go up the Statue of Liberty, when a few people came up to him and told him that they loved him in Mississippi Masala. It was a fantastic moment. I do believe that he should have worked more than he did. When you see him play a street urchin in the children’s film Hungama Bombay Ishtyle, you realise how much the camera loved him.

But acting is the work of his you saw; what I loved about him was his mind. Ranjit was a wonderful writer. He was one of the writers of Malgudi Days. Everyone loved the show, but since I knew him, there was a certain excitement to it. And because he had a writer’s mind, he brought great pathos to all his characters. You see that in the film Sam & Me (a film he wrote and acted in), and for which he received great acclaim in Cannes. How he would read a line was different than most actors would.

One of the aspects of living away was that he couldn’t be there for every occasion. So, he would send us a letter to be read. Farid (Currim, actor) and I would “arm wrestle” over it. Because whoever read the letter, invariably, became the star of the evening. His take on things was always hatke—he would say something fun on a solemn occasion or speak about the beauty in a fun evening. He encapsulated his quirkiness in a letter in an incredible way. In fact, when Dad would receive letters from Ranjit, he would send it to all of us just to read because they were written so beautifully.

Though our meetings were few and far between, there was always some kind of connection. As we grew up, we became four children (Raell, Shazahn, Ranjit and I) of my father. When Ranjit’s son (Avi) was born, there was so much excitement because we became uncle and aunts. It was a big moment for all of us, I remember.

We both bonded over our disdain for the IPL. He, like me, felt IPL was not cricket. AP, however, loved the IPL and we would fight with him over this. Ranjit would send me emails discussing it. Aside of cricket, we would often discuss different writing styles and other preoccupations in the world. It was like having an intellectual soulmate.

Ranjit had an acerbic tongue; his humour was always tongue-incheek. But despite all of that, he was remarkably tender and gentle and created that feeling with everyone around. He could appear as this constantly complaining grouch. But that was a veneer. We always had a mothering attitude towards him. He brought out in everyone that illicit warmth towards him. To each person he knew, he was always “my Ranjit”.

— As told to Reema Geh

Bollywood actors and filmmakers took to Twitter to pay their tributes to the veteran actor. “Gutted to learn of actor Ranjit Chowdhry’s passing,” actor Rahul Khanna wrote. “Despite his diminutive frame, he was a towering icon of Indian diaspora cinema and a master of his craft,” he added. “By far, one of the most endearingly quirky and acerbically witty people I’ve had the pleasure of knowing. A true original!”

Filmmaker Sanjay Gupta also paid tributes to the actor. “RIP [Rest in peace] my friend Ranjit Chaudhury,” he wrote. “Had the pleasure of working with you in Kaante.” he added. “Thank you for the joy you gave us through your performances. Khatta Meetha is my favourite. Keep smiling wherever you ar

“He got a ruptured ulcer in the intestine on April14. A physician was called who said he needs to go to the hospital. They operated on him but he died at 4am (on Wednesday). The funeral was held at 9.30am on Thursday with close family members in attendance,” Thakore told the news agency.

Chowdhry—the son of theatre actor Pearl Padamsee and stepson of ad man Alyque Padamsee—had the gift of standing out in a frame filled with actors. He tickled every funny bone with his hopeless karatekicking act during the hilarious, in-house brawl in Khatta Meetha (1978). In Khubsoorat, when his disciplinarian mom asks why his hair is standing, his repartee is deadpan: “Dar se (out of fright).” And he was note-perfect as the young violinist who sings, “Uthey sab ke kadam dekho rum pum pum,” in ‘Baton Baton Mein’.

Even in roles that pushed him out of his comfort zone—the nose-picking slumdog in Chakra or the nasty pornwatching manservant in Deepa Mehta’s ‘Fire’—Chowdhry was equal to the task.

Amol Palekar, who starred with him in Baton Baton Mein, remembers Chowdhry as a cute, likeable young actor. “He was alive and keen to absorb suggestions. He was a livewire on the sets,” Palekar said in a message

Pickings were slim, often stereotypical, in Hollywood films. But over the decades, the Mumbai-born actor built a decent resume. Chowdhry was a regular with two stellar NRI directors: Deepa Mehta and Mira Nair. He also wrote the screenplay of Mehta’s debut feature, ‘Sam and Me’, and essayed one half of the title part. He acted in Nair’s ‘Mississippi Masala’, ‘The Perez Family’ and ‘Kamasutra: A Tale of Love’.

Reacting to his demise, actor Rahul Khanna tweeted, “Gutted to learn of #RanjitChowdhry’s passing. Despite his diminutive frame, he was a towering icon of Indian diaspora cinema and a master of his craft. By far one of the most endearingly quirky and acerbically witty people I’ve had the pleasure of knowing. A true original!…Giving you a standing ovation & raising a toast to you, my friend!”

Palekar bemoaned, “Too soon to end the journey.” Few would disagree.