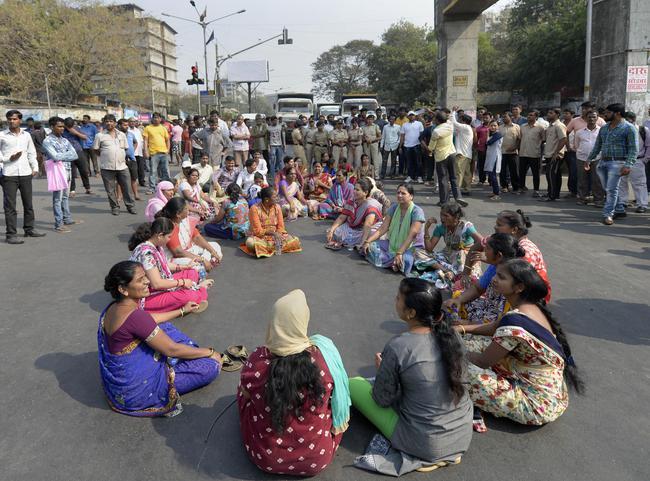 Protests against the violence at Bhima Koregaon. Credit: PTI

The Pune Police have booked six members of the Kabir Kala Manch (KKM), a predominantly Dalit and working class troupe performing protest music, for allegedly making provocative speeches at the Elgaar Parishad held in Pune on December 31 to commemorate the Bhima-Koregaon battle.

The organisers of the event, however, said that the government is trying to divert attention by allowing such FIRs instead of taking action against those who created violence on January 1 at Bhima Koregaon.

The complaint was lodged by a 37-year-old businessman from Pune, Tushar Ramesh Damgude, at the Vishrambaug police station.

Amrut Marathe, police inspector, Vishrambaug, said, “As per the FIR, Sudhir Dhawale, anchor of the programme, Jyoti Jagtap, Sagar Gorkhe, Ramesh Gaychor, Harshali Potdar and many others sang songs and gave talks that incited violence. They allegedly said that the fight against the new Peshwai has begun and they need to fight”.

The FIR alleged that songs, talks and street plays presented by organisers at the Elgar Parishad were inflammatory and incited communal differences. It claims that the book stalls at the event had literature that was also inflammatory in nature.

Protests against the violence at the Bhima Koregaon event in Pune. Credit: PTI

In the FIR, the complainant said that members of the KKM were already arrested for their links with the Communist Party of India (Maoist) whose strategy is to incite Dalits to take the violent route instead of constitutional one. According to the FIR, the KKM members presented inflammatory songs and talks which led to people taking to stone pelting and torching vehicles on January 1.

Complainant Tushar Ramesh Damgude (37) said in his complaint, “Throughout their presentation, which included songs, speeches and drama, the KKM members made remarks designed to incite trouble, such as repeatedly calling for the crushing of the ‘neo-Peshwai’ mentality … It is my view that [the KKM] is a front for the CPI (Maoist) and is misleading the Dalit community with their seditious acts.”

“We have registered a case against them under IPC Section 153(A) for creating hatred, Section 505 for using literature to incite people to act against other communities, Section 117 for abetting commission of offence, and Section 34 for working in a group,” said inspector Marathe.

Dhawale, one of the accused in the FIR and a member of Republican Panther, said, “We all know that people from right-wing organisations attacked Dalits who had gathered to commemorate the battle in which the British army, comprising mostly Dalits, defeated the Peshwas. The government is not taking any action against them and trying to divert attention by allowing people to lodge FIR against us.”

Jagtap of the KKM said, “We are deciding on what course of action should be taken and will inform people about that soon”.

In January last year, the Supreme Court had granted bail to KKM activists Sachin Mali, Sagar Gorkhe and Ramesh Ghaichor, who had been arrested by the Maharashtra ATS for purveying ‘objectionable’ literature and aiding and abetting Naxal activities.

Santosh Shinde of the Sambhaji Brigade, which participated in the Elgar Parishad, said the administration is hounding people who had taken permission for the Parishad instead of investigating Sambhaji Bhide and Milind Ekbote, against whom an FIR was filed after violence in Bhima-Koregaon on January 1.

Meanwhile, the Pune Rural Police have arrested 27 people from the Maratha and Dalit communities for the January 1 clashes at Bhima-Koregaon. Nine of them have been sent to police custody till January 11.