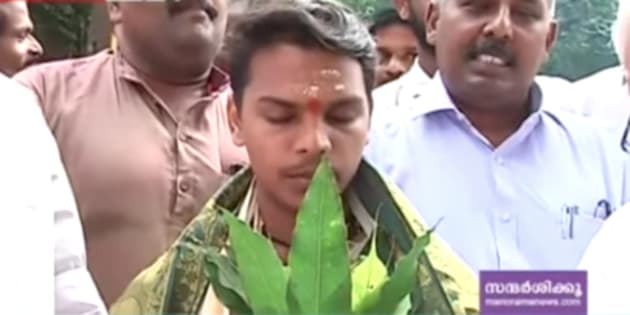 Yedu Krishnan, the first Dalit priest of Kerala, scripted history when he performed prayersat the Manappuram Mahadeva temple at Valanjavattom in Pathanamthitta district on Monday.

Challenging centuries of discrimination and prejudice against Dalits in India, the 22-year-old opened the sanctum sanctorum of Shiva temple at Keecherival.

Krishnan is one of the six Dalit priests who have been recruited by the Travancore Devaswom Board, which manages over 1,000 shrines in the state, including the famous Lord Ayyappa temple at Sabarimala.

Speaking to The Indian Express, Krishnan, who hails from the C Pulaya community in Thrissur, said, “I never felt any discrimination over caste. For the past five years, I was working as a priest at Devi Temple at Valiyakulangara in Ernakulam district. Today, when I left, many non-Dalit visitors to the temple turned emotional.”

Krishnan, who was born to daily-wage laborers Ravi PK and Leela, told The Times of India that he was fascinated with temples since age six and that he had started learning Sanskrit from Class V. The young priest is presently pursuing his MA in Sanskrit Literature.

Krishnan told TOI, “This is the culture of Kerala. The nation should follow this.”

The new Dalit recruits have reportedly been told to join their allotted temples in 15 days.

Kerala Hindu Aikya Vedi general secretary E S Biju told The Indian Express that there have been protests against the appointment of Dalits as priests in the past. “However, now there is a change in the mindset of people. The concern of the faithful is that the priests should be well-versed in temple matters and should lead a life becoming of a priest,” he said.

The recruitment of the Dalit priests comes ahead of the 81st anniversary of the historic Temple Entry proclamation on November 12. PTI pointed out that the royal decree opened temples in the erstwhile state of Travancore to those who were regarded as lower caste Hindus.

Mukul Sinha, self-effacing Modi opponent and labour organiser who disliked being called a leader
Why Are Landless, Marginal and Small Farmers the Backbone of the Farmers Protest?
Globalisation of misery
RBI Defaulters List: The Rs 5 lakh crore secret