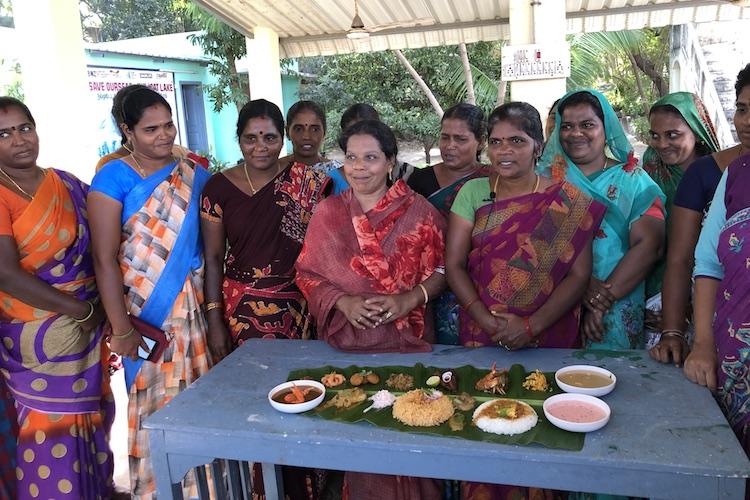 Pulicat’s fisherfolk are fighting against Adani group’s port expansion, which will convert 1145 hectares of land and seawater to industrial real estate, possibly erasing close to 50 villages.

Uma peers into the iron tawa on the stove in front of her, giving it an occasional stir with the ladle. Inside the tawa, white shrimps quickly turn pink as the water they are soaked in disappears with the heat. She then tosses dried chillies and rock salt into the pan to add flavour to this shrimp dish that she calls ‘karkarthu.’

On the other end of the breezy cement hall overlooking the Pulicat lake, 30-year-old Amul stirs a dark crab claw soup. As each pincer plops into the boiling water, she explains the age-old recipe which is local to the people of Pazhaverkadu or Pulicat, which has the second largest brackish water lake in India, 55 kms north of Chennai.

“You must use the mud crabs or brackish water crabs for the soup. The mud crabs live for days after we catch them and saltwater crabs don’t give the same taste. Who knows how long we have to enjoy these dishes made with our catch,” she says.

Across the tiny hall, at least 15 fisherwomen are busy cooking up a seafood storm for the Chennai Kalai Theru Vizha, an annual festival which celebrates local artforms, people and spaces. This year, Theru Vizha will host a three-day seafood festival at Sea Salt, a Chennai restaurant, in collaboration with InSeason Fish, a sustainable seafood guide, where these women will co-create a seafood thaali named Pazhaverkadu Meen Virunthu, featuring classics from the age-old Pulicat cuisine.

The tie-up is an exercise in celebration of the local food and catch of Pulicat’s rich wetland ecosystem, but also so much more than that, as these women cook up a storm to convey a damning message to the world.

“These are our traditional recipes made with the species available in our water bodies. But with Pulicat wetlands facing imminent external threats, these prawns, crabs, our dishes and livelihoods will die in the near future,” Rajalakshmi, one of the fisherwomen in the fest tells TNM.

Their words ring true as residents of 40 villages in and around the region (and 30 villages from Andhra Pradesh) will face imminent risk to life and livelihoods, with Adani Group’s port expansion project set to turn these wetlands into industrial real estate.

The Adani Kattupalli port expansion project aims to expand the L&T port acquired by the company in the Kattupalli island here at a cost of Rs 53,031 crores, by converting 1145 hectares of land and sea in the critical Ennore-Pulicat wetland complex into industrial use.

According to Adani’s expansion proposal, the project will not displace any existing settlements and that vast stretches of “non-agricultural and highly saline barren land are available for development,” says a Hindu report.

Even if their villages aren’t displaced, the project will reclaim land from the wetlands and shallow seas surrounding the lake, not only impacting the Pulicat-Ennore ecosystem but also hogging the fishing grounds of Pulicat’s residents and severely affecting their livelihood.

“Some days we enter the sea and catch live prawns and immediately make curry. With the Adani reclaiming land here, our movements will be restricted and our fishing areas usurped. We know we will eventually be removed from here. But apart from fishing, we do not know any other job,” Rajalakshmi adds.

The impact of Adani’s port expansion could mean that Pulicat’s ecosystem could change from fishing to an industrial ecosystem, with fishers eventually having to give up this space, explains Nityanand Jayaraman, a Chennai-based writer and environmental activist.

Presently, the entire economy around the Pulicat wetland is dependent on one thing – fish.

“Most residents here earn their bread through fishing. The others have ancillary businesses such as ice sales, fish sales, labour, truck contracts to transport fish, tea and coffee shops etc which have cropped up with fishing money. If Adani’s proposal gets cleared, all these businesses could vanish, leaving thousands without livelihoods. We are talking about 30,000 families here,” he adds.

Development could lead to Pulicat lake merging with Bay of Bengal

Beyond the threat of losing their fishing grounds, the Kattupalli port’s expansion could pose a big environmental hazard, eroding the sandy islands which separate Pulicat with Bay of Bengal.

The breakwaters created for the port could stop the flow of sand and aid soil erosion, destroying the island villages that separate the Pulicat lake with the sea. Six seaside villages – namely Kattupalli, Korakuppam, Bhairavan kuppam, Karangan kuppam, Lighthouse kuppam and Goonangkuppam in Pulicat – will become the direct casualties of the erosion.

And if the lake merges with the Bay of Bengal, the sea would swallow the entire area, shifting the region from a wetland ecosystem to a marine ecosystem, Nityanand adds.

“Not only would this drastically alter India’s map, it will wipe away the species in these wetlands, and then proceed to destroy the fishers, their livelihoods and the economy in Pulicat. The destruction will come in waves, with the seaside villages being directly affected and the others later,” he adds.

With the wetlands and islands gone, the Ennore-Pulicat complex will no longer act as a buffer during heavy rains and cyclonic storms of the South West monsoon, potentially paving the way for a natural disaster such as flooding in Chennai and the state’s hinterlands.

By highlighting the importance of the Ennore-Pulicat wetlands, the Pulicat Seafood Festival tries to show how its fate in terms of water and flood security is inevitably tied to the existence of this ecosystem. To celebrate the World Wetlands Day on February 2, the Pazhaverkadu menu curated by the Pulicat fisherwomen will be on offer for three days from January 31 – 2, at Sea Salt in Nungambakkam, Chennai.

Back in the hall, the women finish cooking the entire menu for the Pazhaverkadu Meen Virunthu, within a matter of 2 hours, to teach the chefs and cooks who have arrived from Chennai.

The lunch begins and the mood turns festive, but not without a tinge of dread at the long fight that lies ahead for Pulicat’s fishers.

“The food here always tastes better a day later. That’s because the species here are fresh and resilient. The crabs and shrimp squirm with life even when you drop them into the pot. Try it sometime with kanji (rice gruel). It will all be destroyed soon and you won’t get to miss it,” Amul drifts off.

The Pazhaverkadu Meen Virunthu will be on offer from January 31, February 1 and 2 at Nungambakkam’s Sea Salt restaurant, as part of the Pulicat Seafood Festival. The thaali will be priced at Rs 545.