CD Network
Bhatkal, May 25: Amidst the growing concern that people may lose freedom to criticize elected representatives during the tenure of Narendra Modi who will be swearing in as 14th prime minister of India on May 26, as many as five Muslim students from Bhatkal have allegedly been detained by the Crime Branch in Bangalore for allegedly forwarding anti-Modi messages on smartphone messenger WhatsApp. 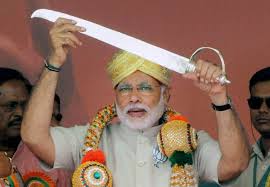 According to unofficial sources, three MBA students and two CA students identified as Waqas, Rahmatulla Maliki, Usama Alangar, Musaib Saada, and Saad Kola were taken into custody by the crime branch police on Saturday. After several hours of questioning, four of them were released on Sunday, one was handed over to Belgaum Police. An FIR has been registered against Waqas by the Khanapur police in Belgaum district.

If sources are to be believed, one of the students received an anti-Modi message on WhatsApp and he forwarded it to others earlier this week. On Saturday the students were rounded up by undercover sleuths in Bangalore. Sources said that City Crime Branch picked up the youth after the local cyber police found that they have been circulating an anti-Modi MMS. But the police has neither confirmed nor declined the incident yet.

It is understood that the police are alleging the youngsters had sent an MMS that shows an ‘an image of Modi lying on a funeral pyre’.

The story is still developing and more information will emerge with time. The arrest has not been made formal by the police as the charges against the youth are still unclear.

Mohammed Sultan Beary, a Bangalore-based lawyer who in the past has represented several Muslim youths falsely implicated in terror cased by the police, said that the police action was “too harsh”. Meanwhile, the incident has sparked quite an angry reaction from the people in Bhatkal.

One of the friends of detained youth said on condition of anonymity that all the five were very innocent and decent students unlike NaMo brigade activists. “They have been targeted by police only because of the fact that they were Muslims and they belonged to Bhatkal,” he said.

It is worth mentioning here that a Goan youth is also facing arrest for an anti-Modi post that he had put up on Facebook during the Lok Sabha election campaign. Naval engineer Devu Chodankar is currently facing arrest after the local cyber crime cell investigating him found that his post was an attempt to “promote communal and social disharmony” in the state.

“There is imminent threat of Holocaust as it happened in Gujarat th(r)ough the garb of cunning government policies of Parrikar,” the 31-year old had stated on his Facebook page.

Though the post was later deleted, Goan businessman Atul Pai Kane, who heads the BJP’s committee on investment and industrial policy, took offence and lodged an FIR against Chodankar.

The youth has been charged under Section 153(A), 295(A) of the Indian Penal Code (IPC), besides Section 125 of the Representation of People Act, as well as Section 66-A of theInformation Technology Act. The clauses of some of the charges are non-bailable.