Five Sentenced to Life for Gang-Raping Northeasterner in Delhi #Vaw 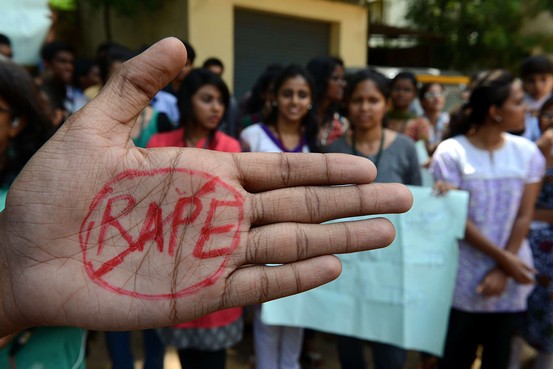 A court in Delhi sentenced five men to life imprisonment Monday for gang-raping and kidnapping a northeastern woman in the capital city in 2010. This photograph taken on September 13, 2013, is from an anti-rape protest in Hyderabad.

An Indian judge on Monday sentenced five men to life imprisonment for gang-raping a 30-year-old northeastern woman in a moving vehicle in Delhi’s south in 2010.

The men – named in court as Usman, Shamshad, Kamruddin, Shahid and Iqbal- werefound guilty last week of rape and kidnapping by Judge Virender Bhatt at a court in southwest Delhi. They were also fined 50,000 rupees (about $815) each.

The woman, a call center employee from the northeastern state of Mizoram, was picked up at gunpoint from Delhi’s southern ring road at about 1 a.m. on Nov. 24, 2010, as she was returning from a late night shift at work in Gurgaon. She was raped in a moving vehicle and was thrown out in an industrial area in Delhi’s east.

“Judgments like these are important for such offenses against women which are on the rise,” Satwinder Kaur, a prosecutor in the case told television reporters at the court complex. “Women need to feel safe and be respected” and perpetrators of such crimes “need to know that they cannot get away,” she added.

Amit Shrivastava, a lawyer for one of the five convicts said he will appeal the verdict in the Delhi High Court.

Life imprisonment was the maximum punishment the men could expect because they were tried under an old provision of the law on violence against women.  The law was overhauled in 2013 to make death the maximum penalty for extreme cases of sexual violence following an outcry at the gang-rape and murder of a 23-year-old woman in New Delhi in 2012. Four assailants in that case were put on death row. They are appealing the sentence.

A recent report submitted by a government-led committee formed earlier this year to look into the issues relating to safety and discrimination of people from northeast estimated that more than 400,000 people from the northeast migrated to big cities between 2005 and 2010 and India’s capital city remained one of the most preferred destinations for migrants from the northeast with over 200,000 of them coming into Delhi for education and employment opportunities.

The report, submitted by the committee led by M.P. Bezbaruah, a member of the government-run North Eastern Council, to India’s federal ministry of home affairs in July, noted that the “number of incidents involving the people from the North East is proportionately very high considering the small number of people from the region living in Delhi.”

Activists campaigning for safety of women from the northeast say those living in the capital city often become victims of racial profiling, both casual and violent, as well as crimes relating to sexual violence- a twofold challenge. Delhi Police formed a separate division to administer crimes against northeasterners, with a special helpline dedicated to women from the region.

Right to Strike-Putting the agenda of the workers at the forefront.
Not enough on the plate: Nutrition plan for poor mothers buried?
#India-27 steps to prevent crime against women ? #Vaw #Womenrights
Indian media wants Dalit news but not Dalit reporters