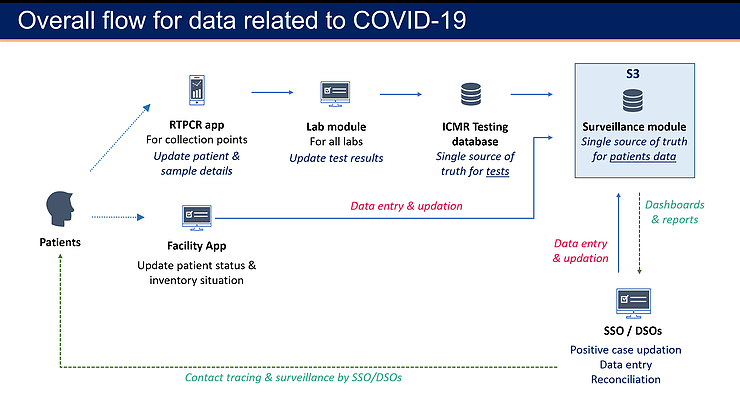 The Centre’s ‘single source of truth’ in easing lockdowns is a database of Covid-19 cases ridden with unverified data, duplicate names and other flaws. States, some protesting at the confusion, use another database and only in five states do the two databases tally.

Mumbai: Two of four parameters that the Centre currently uses to decide severity of the Covid-19 pandemic and ease lockdown restrictions are based on an inaccurate database maintained by the Indian Council of Medical Research (ICMR), according to documents available with Article 14.

107 days after India detected its first Covid-19 case, the Centre announced 78,000 total cases on 14 May 2020, but the ICMR database—declared by the government as the “single source of truth”—used to collate these figures has unverified data, duplicate and wrong names and other data-collection and data-entry flaws, our investigations revealed.

On 29 April, the ICMR database used by the Centre recorded 5,024 different active Covid-19 cases than the National Centre for Disease Control (NCDC) database used by the states, with the two databases showing the same figures in only five states and three union territories, with no more than 16 cases between them. The rest showed either fewer or more cases from state to state.

To complaints from states, India’s premier medical-research body has frequently revised protocols and processes of collecting these data, in one instance changing a data-collection form 10 times over 60 days. But the Centre, which makes all decisions related to lockdowns, has said only the ICMR data will prevail.
It was on 29 April that the ICMR sent a powerpoint presentation, reviewed by Article 14, with urgent instructions to state governments to verify 33,014 records within three days and address other flaws in its database, which pulls in data from India’s 739 districts.

These were ICMR’s instructions to the states: “Before 6 pm on 2 May: Verify, accept & update data [of] patient outcome, mobile no, address, pincode for positive case records on Covid India portal; State & district allocation issues to be resolved at earliest. Missing cases and duplicates to be identified and informed through email.”

The ICMR was asking states to retrospectively verify each of the 33,014 cases in its database as on 29 April and weed out duplicates.

From February, when it was first set up, ICMR’s Covid-19 database has informed the Centre’s strategy to tackle the pandemic, especially in deciding where to ease lockdown restrictions across the 739 districts.

The ICMR database was unreliable even on 1 May, when the Union government extended the lockdown for the second time, up to 17 May, according to the presentation sent to the states.

Unceasing Revision Of Protocols And Processes

Other documents and correspondence between the Centre and the states, reviewed by Article14 show that through March and April and up to the first week of May, the ICMR had not standardised protocols, methods and processes for collecting data nationwide.

The ICMR repeatedly revised and rewrote these, at times confusing and adding to the burden on frontline medical and administrative staff in states and laboratories.

“Guidelines keep coming and changing,” said K Kolandaswami, who retired as Tamil Nadu’s director of public health on 30 April. “There is no dearth of it (sic). Interpretations are also changing.”
“The ICMR database has duplicate names, wrong and vague phone numbers and address details,” a senior officer of an eastern state told Article 14 on 3 May. The officer requested anonymity because of the sensitivity of the issue and requested that the state not be identified.

Another officer in-charge of Covid-19 data management for a western state said, “Sometimes the person had [been] tested in one district, but came from another and originally belonged to a third place. Verification of these discrepancies can only be done by state agencies. But, till recently ICMR did not have a process to allow state and district authorities to verify and fix it.” This officer also did not want to be quoted fearing retaliation from the central government.

The secretary, who heads the ministry of health and family welfare (MOHFW) forwarded our email to others in the ministry and ICMR and copied us. Bhargava replied to the email thread saying, “The matter… is related to MOHFW and not to ICMR.” Bhargava did not reply to a separate email with questions connected to the ICMR. The story will be updated if and when a response is received.

The Tale Of Two Databases

The ICMR began disease surveillance only after the emergence of Covid-19 in January 2020. Until then, only the NCDC, another arm of India’s health ministry, was solely responsible through the Integrated Disease Surveillance Programme (IDSP), which maintains a database of disease outbreaks.

Fed ground-up by frontline health workers and officers in villages, towns, districts and states, the IDSP is the database state governments normally rely on to monitor and respond to epidemics and disease outbreaks.

When the Covid-19 pandemic began, the Centre instead turned to ICMR to collect disease data. The ICMR set up its parallel database, sourcing data directly from designated laboratories that test for Covid-19. The laboratories were also supposed to inform states of positive cases.

The NCDC continued to collect data on Covid-19 cases through its own network of state-government staff. State governments relied on this database to track Covid-19 using its granular data practical to verify information on the ground, trace contacts and make quick decisions.

“We have an IDSP network in every district,” said the officer, previously quoted, from an eastern state. “We have district surveillance officers and epidemiologists. This is a network we have always had and used.”

The IDSP network is understaffed, experts pointed out, and as late as 7 April 2020, the ICMR requested states to fill key IDSP roles. But it is responsive to state governments, has well established data-collection protocols and uses first-hand data.
The ICMR’s database for Covid-19 relies on second-hand data collected from testing laboratories. Both databases never reconciled during the Covid-19 pandemic.

By the middle of April, many media reported the database discrepancies (here and here). The health ministry officials at the Centre explained it as “an occasional lag” arising out merely a lag in updating constantly evolving information from the states to the central database.

Multiple documents and communications reviewed by Article14 indicated the flaws were fundamental.

ICMR requested states more than once before 29 April to reconcile the databases, but state officials claimed the ICMR did not respond to multiple requests to update data.
“I have a chain of mails that I have been writing to the ICMR to correct data, but they didn’t respond,” said the officer from an eastern state quoted earlier. “We found people residing in Delhi and Punjab listed against our state (sic) because they had given their permanent address and not the current address.”

If the ICMR has used data from testing laboratories, why was it flawed?

“ICMR took the data directly from the labs and did not require us to ground-truth it,” the officer said. “Sometimes, people do not disclose their full addresses, out of negligence or fear. Sometimes, the field-staff will fail to fill the correct and full details.”

The officer gave an example of a flaw in the database-collection system to check against incomplete or wrong entries, filled as they are by field staff and accepted by laboratories at face value.

“If the state administration wants it can get incomplete data verified on ground,” said the officer, previously quoted, from a western state. “But the ICMR database onboarded information without verification.” Some home addresses are addresses of fever clinics or hospitals and repeat tests on the same person showed up as different people because names were recorded differently.

“Till this 29 April instruction, ICMR did not allow state and district authorities to verify and fix its database,” the officer said.

Article14 reviewed multiple versions of the basic form that ICMR ordered labs and states to use for on Covid-19 testing data: “ICMR Specimen Referral Form for COVID-19”. At least 10 different versions we created over a period of two months with minor and substantial changes.

The 10th version of ICMR Specimen Referral Form for Covid-19 that labs and state health officials must use to collect data.

Several officials at the Centre and state raised doubts over ICMR’s ability to collect such data, considering it is, unlike NCDC, primarily a research agency, which evolved its own data-collection methods in about two months. The ICMR has always used NCDC data to analyse disease patterns.

“It started with the fallacy that the most important aspect of disease management is testing, which is why the ICMR was made the nodal agency,” said the official from the eastern Indian state, quoted earlier. “But the ICMR is all scientists in labs, whereas the NCDC handles disease in the field.”

The Impact Of A Flawed Database

While the ICMR struggled to fix the flaws in its methods and to standardise its processes, by mid April states complained to the Centre. The latter said it would look into the problems of misclassification in coming days.

As we reported in the first part of this series, by 15 April, the Union government first slotted India’s 739 districts into red, orange and green zones, based on information from ICMR’s database.

By 1 May, the same database was used by the Centre to unilaterally extend restrictions under the lockdown in districts marked as red zones, which until then had been districts with the highest caseload in the country. The criteria for deciding red-zones had been revised. The Centre announced it would use four parameters to decide pandemic severity. Two of these parameters —number of cases and the rate at which they were doubling—depended on ICMR’s shaky database.

ICMR’s 29 April presentation sets its database as the “single source of truth”.

The ICMR also ordered the states to use a newly minted app, called RT-PCR, which it had launched in the last week of April, to update the database.

Slide from training material for RT-PCR app introduced by govt. in April and made mandatory in May to fill data on testing.

Communications between state officials, laboratories and doctors reveal confusion and concern. In two states, for instance, doctors and frontline staff asked how they would use the app on phones while wearing cumbersome protective gear. In another instance, after releasing the app, the ICMR changed methods of retrospectively filling old data in the app.

Training material sent to states by the Union health ministry on 7 May, revising protocols for data management.

“It is good that the ICMR has finally allowed a two-way channel for states to verify the data it holds and correct it if need be,” said one of the state government officials we spoke to. “This should have been done from day one. By this stage the methods of collecting data should have been standardised and the data robust enough to trust.”
On 10 May, at least three large states had still not been able to update, correct and verify all the data with ICMR. Article 14 could not independently verify if others had. “Integrity of the data is important, we understand,” said the official quoted above. “But, it is a tedious process to train and retrain staff on protocols and form filling all the time.”

By 17 May, Prime Minister Narendra Modi said in a 12 May address to the nation, his government will reveal the contours of a third extension to the lockdown and a possible easing in some districts. That decision will be based on ICMR’s database.