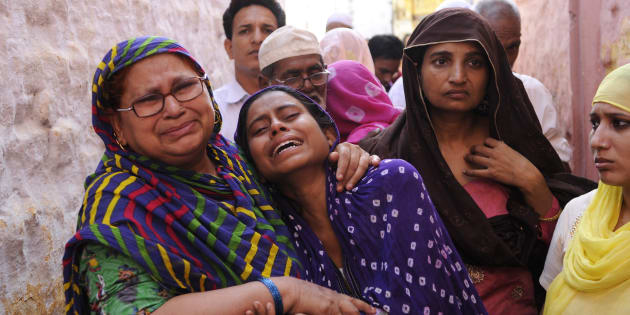 HINDUSTAN TIMES VIA GETTY IMAGES
GREATER NOIDA, INDIA – SEPTEMBER 29: Family members of Mohammad Akhlaq (50-year-old man) mourn during his funeral at their village in Bisada on September 29, 2015 in Greater Noida, India. Akhlaq was beaten to death and his son critically injured by a mob over an allegation of storing and consuming beef at home, late night on Monday, in UPs Dadri. Police and PAC were immediately deployed in the village to maintain law and order. Six persons were arrested in connection with the killing of man. (Photo by Burhaan Kinu/Hindustan Times via Getty Images)

Someone’s dinner thus became a part of a serious criminal investigation. A state’s resources were spent testing the meat to see what kind of meat it was.

And now the dead man’s family faces the prospect of criminal charges. Macabre is too mild an adjective to describe all of this.

Last year Mohammad Akhlaq, the ironsmith in Dadri in Uttar Pradesh was dragged out of his home by a mob and beaten to death because of rumours that his family was eating beef. Now a court has ordered an FIR against the Akhlaq family, including his mother and widow, on charges of cow slaughter.

In a way the court cannot be blamed. The application was moved under156(3) CrP . It is doing what the law tells it to do. Beef eating is not a crime in Uttar Pradesh but cow slaughter is. It’s a non-bailable offence and punishable by up to seven years in jail. “They came from everywhere. Over the walls, through the gate…They just barged into the house, shouting that we had slaughtered a cow,” said his 75-year-old mother, Asghari Akhlaq at that time. “I asked them how can we bring a cow into the house without anyone seeing? We are the only Muslim family in this neighbourhood.”

While Akhlaq’s family had insisted it was mutton, others said they had seen his brother slitting the throat of a calf, and Akhlaq and his son beating it.

And thus the issue is no longer that a man is lynched to death because of his dinner. The issue has been twisted into whether Akhlaq lied about it being beef or mutton. The answer to “What did you have for dinner?” is being used to somehow justify or at least explain death by lynchmob. We are being asked to be more bothered about what Mohammad Akhlaq was eating rather than who killed Mohammad Akhlaq.

The real horror is that nine months after the incident, there appears to be no sense of remorse about how things got out of hand that dark day in Dadri. Right after that horrific incident, NDTV‘s Ravish Kumar filed an anguished report from the region.

He wrote “How is it that I didn’t find a single person who looked ashamed or had even a shred of remorse? Why was no one distraught that thousands of people from the village could have been transformed into a killer mob?”

Nine months later that still seems to be holding true. After the FIR was ordered, local BJP leader Sanjay Rana, whose son is one of those accused of killing Akhlaq, said ,”The court has rightly ordered lodging of the FIR. The UP government was taking one-sided action. Now the court order has provided justice to other side too.”

Justice for the other side? What the other side is arguing is not that Akhlaq was not beaten to death but that he was actually eating beef not mutton. It is on those grounds that they are claiming a piece of victimhood even as the dead man’s family is being stripped of its victimhood.

The story has anyway been bedeviled with conflicting forensics reports. At one point a forensics laboratory had said the meat recovered was not beef but mutton. Then a recent report said it was indeed the meat of a cow or its progeny. Then it was said that the meat was recovered from the scene of the crime but not necessarily the refrigerator. At this point the story had become so hopelessly politicized, mired in upcoming UP election politics, that no matter what the report says, it settles no conspiracy theory. It just feeds into conflicting agendas which are clearly all about power and not about justice. How disgusting it is that it actually matters electorally what was in Akhlaq’s fatal dinner.

At that time the forensic report came out, the village, according to NDTV, ordered a mahapanchayat where there were calls for action against Akhlaq’s family. This does not seem to be the actions of a village feeling remorse for a senseless death. It sounds like a bald attempt to place the onus of Akhlaq’s death at Akhlaq’s door.

Was Mohammad Akhlaq eating beef or was he eating mutton that fateful day? It is just obscene that our views about what happened to him should even be tempered by the answer to that question. In 2016 India a dead man’s dinner is now effectively on trial.

If we want to call ourselves a modern country, should that not stick in our collective throat?

Kancha Ilaiah Shepherd -A call to left-liberals
Make Bharat Mata Proud, Become A Nationalist In 4 Easy Steps
Looking back – and forward – from Modi’s election
Advancing Net Zero: Why Green Building is Crucial in the Fight Against Climate Change