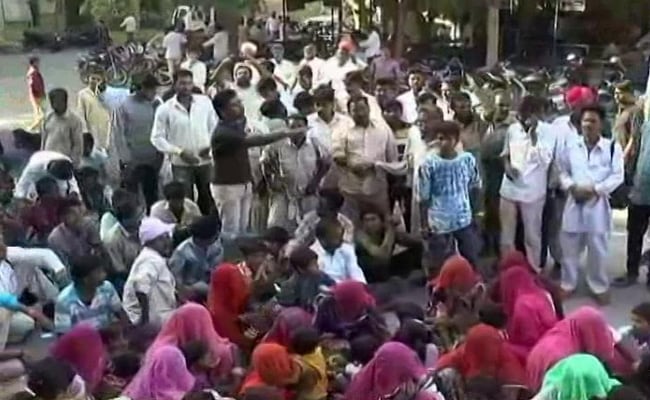 JAIPUR: Caste and religion both worked against Amad Khan in village Dantal in Jaisalmer district a few days ago when he was unable to satisfy a village faith healer Ramesh Suthar with the quality of a raag he was asked to sing on Navratri. He was beaten on the spot, and allegedly later at night picked up from his house and killed.

At least 20 families fled their village, terrorised and in fear of their lives, after this incident that has barely been reported in the media. Local newspapers carried some details but in the mainstream media the horrific incident did not even make it to the front pages. Television channels of course did not bother covering the attack.

Rajasthan has been home to some of the most gruesome incidents in recent months. Amad Khan, from a folk community Langar Maganiyaar, would sing during Navratri at the local village temple. This time around he was doing the same when Suthar reportedly asked him to sing a specific raga so that the spirit of the goddess of the temple entered his body. Sutha, according to the locals, would ‘cure’ local problems, getting his authority from the spirit of the goddess as it were.

But this time the goddess eluded Suthar, and he blamed Khan for not singing properly. He assaulted the singer, broke his musical instruments. And at night Khan was reportedly abducted from his residence, with his body being thrown outside the house later. Local reporters said that Khan’s family received threats later and warned against going to the police. His brother told local reporters that they were terrified and so buried his body quietly.

However, a few days later they mustered the courage with the support of relatives and others who visited them to register a complaint with the police. But after this the threats took real shape and at least 20 terrified families of about 200 persons left the village, Suge Khan was reported as having said.

The Dantal village sarpanch, according to the Hindustan Times claimed that Khan had died of a cardiac arrest, and that the Muslims had left the village in anger when the locals did not accompany them to the police station. The police, however, confirmed that he had died of physical assault. Jaisalmer superintendent of police SP Gaurav Yadav has been quoted as saying, “We have assured them of protection if they want to return…We have also spoken to village elders and told them that cases would be lodged if they threaten the Muslims.” Yadav added.

However, caste seems to have played a major part in this violence. PUCL activist Kavita Srivastava told The Citizen that since “Amad Khan a Manganiya broke the code and went against the bhopa, all the communities came together against the Manganiyar in this Rajpur dominated village.” She said that Suthars are OBC’s, relatively few in number and so have the support of the Rajputs here.

Srivastava said that the “anger and consolidation of the other communities against the Manganiyars for having taken police recourse, led to the exodus. The day the body was exhumed nobody even gave them water for washing and prayers. Which is when they all left. And stayed in a close by place called Balad in the open, where they have relatives. The fear was such that they left their horse behind and did not have the courage to bring it to them. Finally the police brought the horse.”

The police have arrested Suthar but two of his accomplices charged with abducting and killing Khan are still at large. The families are too scared to return to the village, Srivastava said adding that they will probably work in the city as labour and somehow survive.

According to Kavita Srivastava, the Muslim angle in this incident is not dominant. Khan and the other families who have fled are “ untouchable Muslim dholis” There are Hindu dholis as well, she said, suffering from the same caste discrimination. “ If there was the caste / religion angle then the manganiyars in the first place would not be singing parcha and devi raag in the temple, during navratri, which is a normal feature,” she added.

The upper caste consolidation against them was because they were not submissive and challenged caste and religious authority, Srivastava said.