For all Modi’s talk, sanitation in Gujarat is plumbing new depths 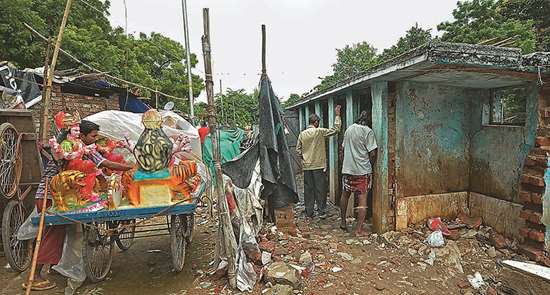 From the plush Sardar Vallabhbhai Patel airport in Ahmedabad to Gandhinagar is a dream drive. Till last year, though, just before the road takes a turn to the bridge across the Sabarmati river, an array of bare bottoms used to make people flinch and turn away. But the municipal corporation hit upon a brilliant idea to solve this—they constructed a wall to hide the slums on this VVIP route and added a bamboo plantation for good measure. The exhibits may have been hidden from public view but the spillovers are still on display every morning!

Cut to Gandhinagar, and to the majestic Mahatma Mandir, a swanky Rs 500 crore monument to chief minister Narendra Modi but ironically named after the half-clad Mahatma Gandhi. On the road leading from the Sarkhej-Gandhinagar highway to this global convention centre, the view again has been cut off but the stench remains. Switch to the secretariat. The sac­h­ivalaya has undergone a major renovation. Gone is the old staid sarkari look, in its place is a stylised corporate one, carrying the distinct stamp of Modi. But barring the CM’s newly constr­ucted block, pass any other gallery and the toilets yell from a distance, making you hold your breath. Even the IAS off­icers hold their breath as they pass.

The temples of the state are not immune to this problem either. The Saranpur Hanuman temple, 164 km from the state capital Gandhinagar, is a popular place of pilgrimage. Tho­usands congregate here daily. It has a toilet, and there’s even a loo for the ladies. Both western style and Indian. They, however, are usually locked. The janitor says the locks can be opened for a payment of Rs 4 but he can’t guarantee a clean loo or flowing water.

Indeed, the ‘toilets’ there are an exception in the vast countryside where “sit and shoot” is both an essential chore and a national pastime. While prime ministerial hopeful Narendra Modi may have stirred a sandstorm with his temple-toilet remark, most cities of Gujarat, including its capital, are sorely lacking in these basic public facilities. Also, “the gender discrimination is acute,” says Prof Purabi Bhattacharya, who says even the ones that exist in the capital are so filthy that one would end up sick if one was to use it. Housewife Jayshri Vyas, who stays in the comparatively better off Panchayatnagar area in Rajkot, voices the same sentiment.A CAG report for the period up to March 2012 points out that 18,321 anganwadis in the state are without toilets. Additionally, the Gujarat Pollution Control Board has issued notices to eight municipal corporations and 159 municipalities for not following guidelines on solid waste disposal.

Gujarat was free of manual scavenging, claimed the state government in an affidavit as far back as in 2004. The same government, however, commissioned the Tata Institute of Social Sciences (TISS) to carry out a survey in 2006 and the report identified 12,000 people carrying ‘night soil’. Even more strangely, while claiming Gujarat to be scavenger-free, the state government has also been availing central grants for the rehabilitation of scavengers.

Gujarat Safai Kamdar Vikas Nigam MD C.S. Rajpal told Outlook, “Gujarat has completed a survey on manual scavenging in statutory towns and not a single case was reported”. But asked how railway tracks and platforms were being cleaned now, he had no answer. Martin Mackwan, a rights activist, bel­ieves Modi is targeting the Dalits with his statement on toilets and wonders aloud if the BJP’s prime ministerial candidate would allow toilets to be built at the disputed site at Ayodhya, as has been sugg­ested by the Congress’s Jairam Ramesh (or originally by Kanshi Ram). The census figures are equally revealing. As many as 52 lakh households in the state have no toilet. Over 64 lakh households do not have any drainage facility and 49 lakh people are defecating in the open. And another unique distinction for Gujarat: there are more toilets in the state serviced by animals (4,890) than by scavengers (2,566).

By R.K. Mishra in Ahmedabad and Bhasha Singh in Delhi