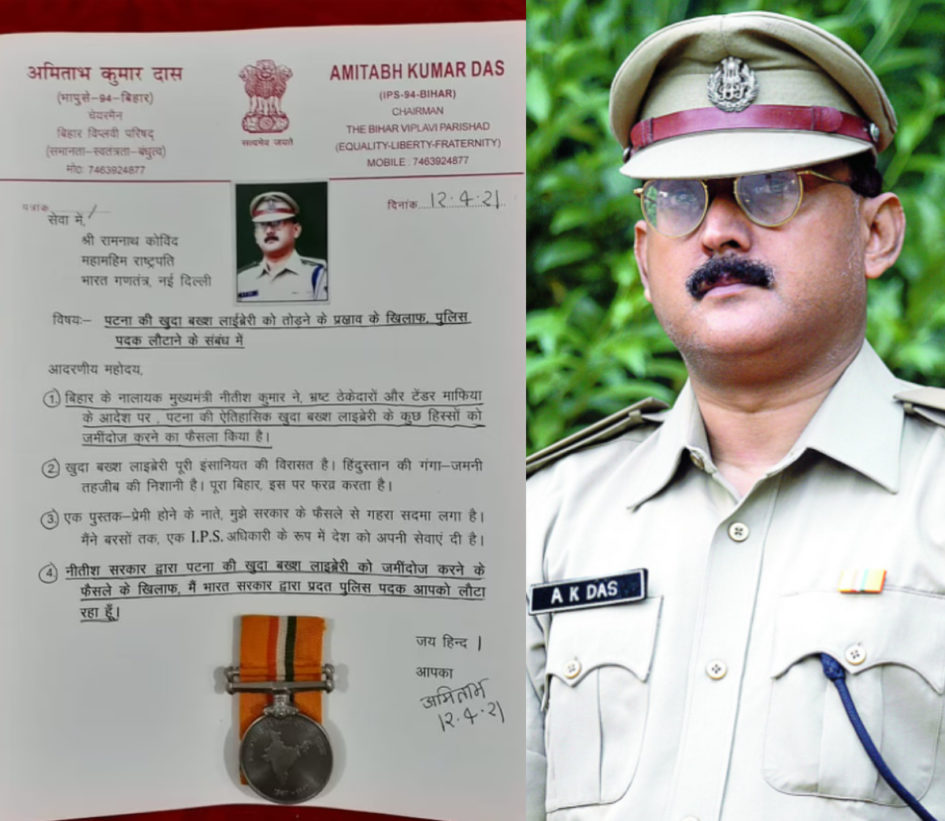 Das decried the government’s decision to destroy part of the iconic library for construction of a flyover nearby.

Along with the medal, Das sent a letter to Kovind that said, “Chief Minister Nitish Kumar has decided to demolish parts of the historic Khuda Baksh library on orders of corrupt contractors and tender mafia. The library is a legacy of the entire human race, a symbol of the “Ganga-Jamuni Tehzeeb.” The whole of Bihar is proud of it. As a book-lover, I am deeply shocked by this decision. I served the country for many years as an IPS officer. I am returning to you the police medal given by the Government of India to protest the Nitish government’s decision.”

Similarly, Das talked about his campaign “Har Shaks: Khuda Bakhsh” (Every person for Khuda Baksh) to save the library and appealed to people associated with education and literature across India to return their Padma Shri or Sahitya Akademi Award and stand in solidarity with the Khuda Baksh Oriental Public Library.

According to the Bihar State Bridge Construction Corporation, the demolition of the Curzon reading room and front garden of the library is required to overcome traffic issues from Kargil Chowk to NIT flyover. According to the Siasat, parts of Patna Medical College and Government Urdu library will also be affected. However, Das’s Bihar Viplavi Parishad organisation opposed this decision.

The Khuda Bakhsh Oriental library is one of India’s national libraries boasting lakhs of books and manuscripts in Arabic, Persian, Pashto, and Turkish. The public library was opened on October 29, 1891 by Khan Bahadur Khuda Bakhsh with 4,000 manuscripts. The place is known for its rare collection of Persian and Arabic manuscripts. Over the years, many lords and ladies, kings, nawabs, freedom fighters including Mahatma Gandhi, poets and patriots have visited the library.

When it opened in 1891, the Khuda Bakhsh Oriental Public Library was the first of its kind that the common people of Bihar could access. Twelve years later, then-Viceroy of India Lord Curzon visited the library, located near the banks of Ganga in Patna, and was so impressed with its collection of manuscripts that he provided funds for its development. In gratitude, the library established the Curzon Reading Hall in 1905.

Since then, the reading hall has been a vibrant place where students, scholars and researchers from around the globe try to shape their careers.

But today, when Patna’s face is changing with new roads and flyovers, this reading hall and some other portions of the library could cease to exist if the Bihar Pul Nirman Nigam’s (bridge construction corporation) proposal to build an elevated road is approved by the Nitish Kumar-led government.

The proposed new elevated corridor seeks to connect Kargil Chowk, located next to the iconic Gandhi Maidan, to NIT Patna, and ultimately to the ambitious 24 km-long four-lane Ganga Drive along the riverfront.

Dr Imtiaz Ahmad, former director of the Khuda Bakhsh library and former professor of history at Patna University, told ThePrint he was “shocked that such a proposal to bulldoze our heritage” had been submitted. Ahmad is still on the library’s governing body, of which the governor of Bihar is ex-officio chairperson.

“(Apart from the Curzon Reading Hall) the proposal takes away the small garden the library has. There will be a crunch of space if that happens, and it will be difficult to provide security to VVIPs coming here,” Ahmad said.

Legacy of the library

The library was founded by Khan Bahadur Maulvi Khuda Bakhsh, the top member of the landed gentry of Siwan. Khuda Bakhsh inherited 1,400 manuscripts from his father and dedicated a large portion of his life travelling across the subcontinent collecting more from impoverished members of the gentry. He collected around 4,000 manuscripts before dedicating them to the people through a trust.

In 1969, the Government of India acknowledged the Khuda Bakhsh library as an Institution of National Importance through a bill passed by Parliament. It is funded by the Union Ministry of Culture.

Today, the library has over 21,000 manuscripts, mostly in Arabic and Persian, but also over 100 in Sanskrit. It has over 2.5 lakh books — some of them very rare — and finds mention in UNESCO’s Memory of the World Register on heritage.

Among its prized possessions is the only copy of Amornama, a collection of miniature paintings dating back to the 16th century and carrying the endorsement of Mughal emperor Shahjahan. It also has a rare collection of Hafiz, a 14th century poet whose lines were recited in the classic Hindi film Mughal-e-Azam.

The library is also home to a 12th century book on human and animal surgery, obtained from a library in Spain, and a 15th century manuscript on the benefits of herbal plants.

There is outrage among the people of Patna over the proposal to demolish a part of the Khuda Bakhsh library.

“If there is a minor alteration that does not affect the functioning of the library, it should be accepted. But a major alteration must be condemned. About 2,400 years ago, Plato had stressed the making of human beings rather than dockyards. Human beings are created in institutions like the Khuda Baksh library,” Choudhary said.

The Indian National Trust for Art and Culture Heritage (INTACH) has appealed to CM Nitish Kumar to protect it from even partial demolition, and threatened to move the courts if needed.

“We are grateful to CM Nitish Kumar for making these flyovers and roads. But our heritage must be protected. In Europe, governments restore heritage buildings, not demolish them. It must be understood that these heritage buildings do not belong to the current generation but future generations,” J.K. Lal, chief of the Patna chapter of INTACH, told ThePrint.

This is not the first tussle the INTACH is involved in with the government. In 2016, the state proposed demolishing the 200-year-old Patna Collectorate building constructed near the banks of the Ganga by Dutch traders. Nitish Kumar even laid the foundation stone for the new building despite protests, following which INTACH moved court and the Supreme Court stayed the demolition of the building.

“Nitish Kumar believes in building new structures and institutions and not restoring old ones. He built a new museum, a new business management institute, a new university, even though the current institutions are in a bad state,” said a government engineer not wanting to be identified.