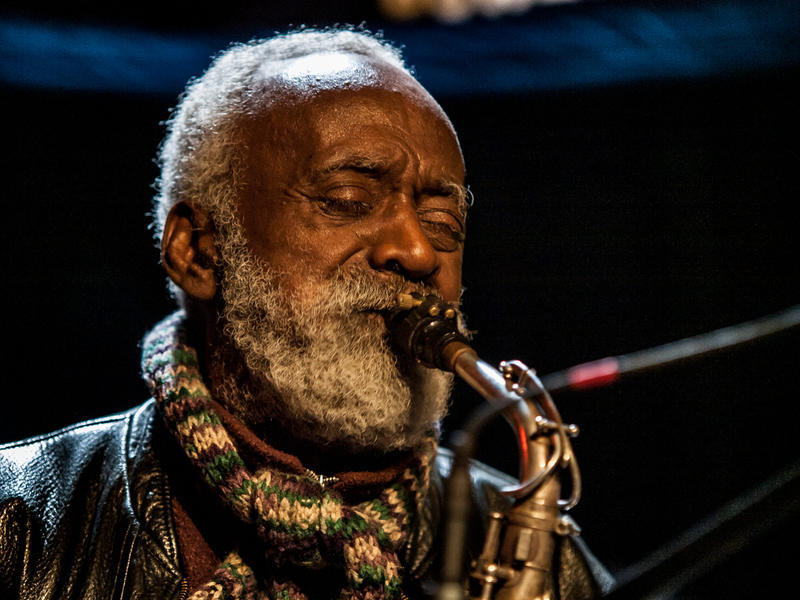 Giuseppi Logan, a saxophonist, clarinetist and flutist whose esteemed career in free jazz bracketed a mysterious absence of almost 40 years, died on Friday at the Lawrence Nursing Care Center in Far Rockaway, Queens. He was 84.

Matt Lavelle, a trumpeter and clarinetist who was Logan’s closest musical partner over the last dozen years, said the cause was related to the coronavirus.

Logan leaves behind a small body of recorded work, but his standing in the improvised avant-garde is considerable. He emerged just as free jazz was beginning to crest as a movement, and even amidst a crowded field of iconoclasts, he distinguished himself as an original.

In 1964, shortly after his arrival in New York, he participated in The October Revolution in Jazz, alongside artists like trumpeter Bill Dixon and pianist Cecil Taylor. Several weeks later he recorded The Giuseppi Logan Quartet for ESP-Disk, with impeccable partners: pianist Don Pullen, bassist Eddie Gomez and drummer Milford Graves.

Logan’s second album, More, was recorded live at The Town Hall during a concert of ESP-Disk artists on May 1, 1965. (The same concert yielded saxophonist Albert Ayler’s classic Bells.) His group worked often over the next year or two, notably on a college tour organized by the label; he also appears, playing flute, on College Tour, by the avant-garde vocalist Patty Waters.

In performance, Logan would not only play saxophone and flute but a range of other instruments, with varying degrees of technical facility. Reactions were mixed, with many “New Thing” converts on one end of the spectrum; the other end held a good many detractors, including the bulk of jazz’s critical establishment.

Whitney Balliett, reviewing a performance at Judson Hall for The New Yorker, noted that Logan and his band “had the air of mediums possessed.” That furious intensity wasn’t a turn-on, as Balliett made painfully clear. “Logan’s sheer dexterity masks sly sins,” he wrote, and proceeded to enumerate a few:

His violin work, made up of a million short, scratchy notes, was demonic; his trombone was equally congested; his trumpet playing was high and strangled; his alto and tenor saxophones — he dangled each instrument from his mouth like a cigarette — were a mockery of Ornette Coleman; his Pakistani oboe was a Pakistani oboe; and his vibraphone sounded as if he were pouring loose change into it.

A short film from 1966, by Edward English, shows Logan in his East Village neighborhood with his family. A hand-lettered sign on his door reads “GIUSEPPI LOGAN / Music Teacher / All Instruments / Vocal Coach.” At one point, he is heard in voiceover: “If people in any other profession are able to support their families by doing what they do, I mean, why can’t I?” he says. “Or other musicians that are doing something that’s good for society?”

Logan made one of his only sideman appearances in 1966 on an album by trombonist Roswell Rudd, whom he had met through Graves (like Rudd, a member of the New York Art Quartet). That early Rudd album, Everywhere, consists of just four compositions, one of which is Logan’s “Satan Dance” — a theme introduced, as “Dance of Satan,” on The Giuseppi Logan Quartet.

By the early 1970s, Logan’s struggles with substance abuse and mental illness had removed him from the scene. He is mentioned in a footnote of Valerie Wilmer’s 1977 book As Serious As Your Life: The Story of the New Jazz as “no longer active in music,” and his whereabouts were unknown, even to his family, for the next few decades. In a haunting coincidence, his passing came the same week as that of bassist Henry Grimes, whose story similarly includes a disappearing act, followed by a welcome return.

Joseph Logan was born in Philadelphia on May 22, 1935. (According to Lavelle, he adopted his Italianate first name for effect, possibly at the suggestion of ESP-Disk founder Bernard Stollman.) His first instrument was the piano, which he taught himself; he took up reed instruments at age 12. He studied at the New England Conservatory before moving to New York. That first iteration of his career lasted only about half a dozen years.

Survivors include two sons, Jaee, a pianist and producer, and Joe.

According to a sympathetic profile by John Leland in The New York Times, Logan had stretches of institutionalization and homelessness, in Norfolk, Va. and then back in New York. He slept in shelters or on the subway. He played his saxophone for change, often in Tompkins Square Park in the East Village — where Josh Rosenthal, founder of Tompkins Square Records, would often see him playing “Somewhere Over the Rainbow,” without realizing his pedigree in free music.

Around the same time, Logan wandered into a Sam Ash music store in midtown and encountered Lavelle, who pieced together his identity and quickly became a crucial ally. “He was in a place where he was trying to get back to his musical self,” Lavelle recalls.

With Lavelle’s help, Logan played his first proper gig in some 40 years, at the Bowery Poetry Club on Feb. 17, 2009. Later that year they recorded an album for Tompkins Square Records, The Giuseppi Logan Quintet, also featuring François Grillot on bass, Warren Smith on drums, and one of Logan’s former collaborators, Dave Burrell, on piano.

“The main thing for me, to be honest, was just to make Giuseppi feel good and to give him some money and some CDs to sell in the park,” recalls Rosenthal. “He made his first record in 45 years, and that was enough. But the record was surprisingly well received.”

Lavelle says that he and Logan had been working on a return to the freeform explorations of the 1960s, and making progress toward another album, before a series of hospitalizations thwarted the plan.

“I learned a lot about the humanity in music from Ornette Coleman,” Lavelle says. “But Giuseppi to me was the ultimate example of that. His music was all about really how he felt, who he was, and how vulnerable he was. There’s this one video of us at Local 269, where he plays ‘My Favorite Things.’ He pretty much plays the melody and does some variations on it. But there’s so much of his sound; nobody else would ever, ever play it that way.”

Beyond the raw originality of the expression, there was a power of commitment. “His thing with music was in the extreme,” Lavelle adds. “It truly was more important than anything else. Giuseppi was one of those guys who was almost consumed by how much he wanted to get inside of the music. Everything else in his life was connected to this prime directive that he had.”