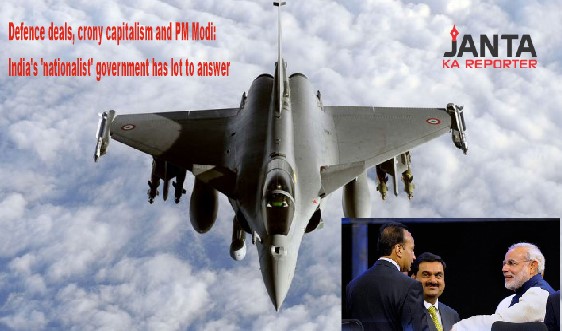 The online journal published alleged fake invoices that it claimed enabled Dassault Aviation to pay at least €7.5mn in kickbacks to a middleman to help it secure the ₹59,000 cr deal with India for 36 Rafale jets

Mediapart, a French online journal, on Sunday published alleged fake invoices that it claimed enabled French aircraft maker Dassault Aviation to pay at least €7.5 million in kickbacks to a middleman to help it secure the ₹59,000 crore deal with India for 36 Rafale fighter jets.https://f089ce2e8d6ef4a534ee1a6fde20c95b.safeframe.googlesyndication.com/safeframe/1-0-38/html/container.html

It added that despite the existence of documents, Indian agencies decided not to pursue the case.

“It involves offshore companies, dubious contracts and ‘false’ invoices. Mediapart can reveal that detectives from India’s federal police force, the Central Bureau of Investigations (CBI), and colleagues from the Enforcement Directorate (ED), which fights money laundering, have had proof since October 2018 that Dassault paid at least €7.5 million in secret commissions to middleman Sushen Gupta,” Mediapart said in a report.

Five months ago, Mediapart reported that a French judge was appointed to head a probe into suspected “corruption and favouritism” in the deal. In a report in April 2021, the online journal claimed that it was in possession of documents that showed Dassault and its industrial partner Thales, a defence electronics firm, paid “middleman” Gupta several million euros in “secret commissions” in connection with the deal.

According to the April report, the bulk of the payments were made before 2013. “According to an accounts spreadsheet belonging to Sushen Gupta, an entity called simply ‘D’, which is a code he regularly used to designate Dassault, paid €14.6 million to Interdev in Singapore over the period 2004-2013,” the report said.

It said Interdev was a shell company with no real activity and administered by a straw man for the Gupta family.

The report said according to another accounts spreadsheet belonging to Gupta, which only covers the years 2004 to 2008, Thales paid €2.4 million to another shell company.

In another report in April, Mediapart claimed that Dassault paid €1 million to Gupta for manufacturing 50 large replica models of Rafale jets, even though the planemaker provided inspectors of French anti-corruption agency Agence Française Anticorruption no proof that these models were made.https://f089ce2e8d6ef4a534ee1a6fde20c95b.safeframe.googlesyndication.com/safeframe/1-0-38/html/container.html

India’s decision to sign an $8.7 billion government-to-government deal with France to buy 36 Rafale warplanes made by Dassault was announced in April 2015, with an agreement signed a little over a year later. This replaced the previous Congress-led United Progressive Alliance (UPA) government’s decision to buy 126 Rafale aircraft, 108 of which were to be made in India by the state-owned Hindustan Aeronautics Ltd (HAL).

The deal became controversial. The Opposition, led by the Congress, claimed that the price at which India was buying Rafale aircraft now is ₹1,670 crores for each, three times the initial bid of ₹526 crores by the company when the UPA was trying to buy the aircraft. It also claimed the previous deal included a technology transfer agreement with HAL

HT has not reviewed any of the documents cited by Mediapart.

The UPA deal, struck in 2012, was not a viable one, the then defence minister Manohar Parrikar maintained, implying that it would have never been closed and that, therefore, any comparison is moot. The UPA was not able to close the deal till 2014, largely over discussions related to the pricing of items not included in the initial bid.

The government has said that it cannot disclose the details of the price because of a confidentiality agreement with France, and the strategic reason of not showing its hand to India’s enemies. It said that the current deal also includes customised weaponry.

The Supreme Court heard a public interest case on the deal and in November 2019, said it saw nothing wrong in it. In a February 2019 report, the government’s auditor, the Comptroller and Auditor General of India, said India had not overpaid for the jets.

HT has reached out to the CBI for a response and the copy will be updated once the agency responds.

Why should we stand for the national anthem?
For all Modi’s talk, sanitation in Gujarat is plumbing new depths
Failure to Set Up PHC in Village: Bombay HC issues contempt notice to principal secy, health
Inspiring Tale of Alice Clement, Chicago's Female Sherlock Holmes