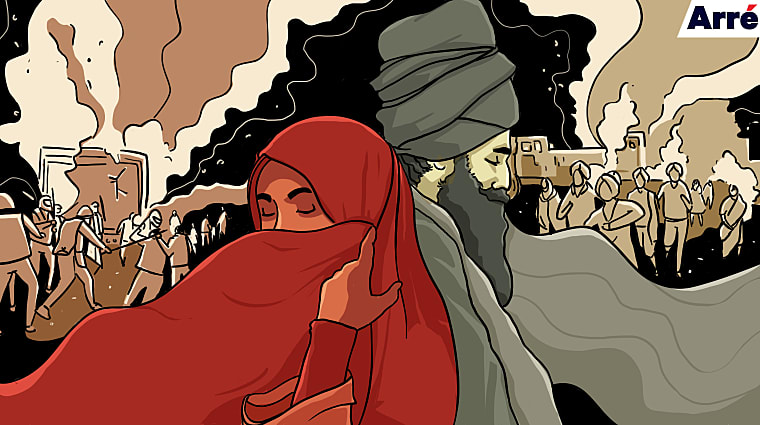 A couple of weeks ago, as the CAA protests started gathering steam, I tweeted a video from a gathering in Bandra’s Carter Road. It prompted a gentleman on Twitter to label me a “bloody Khalistani”. My name was enough for him to sum up my entire existence. This is what happens when communities are othered and demonised.

A few weeks ago, as India gathered to protest the divisive Citizenship (Amendment) Act and the National Register of Citizens, there was a flurry of activity in my family’s house in Delhi. One of the carpenters employed for some renovation at the house – let’s call him Aslam – began to work long hours and wore a tense look all the time. He lives in New Seema Puri, a small tract of land populated by low-income migrant families who work daily-wage jobs around the Uttar Pradesh border.

Aslam was worried that he was going to be arrested soon; or worse, detained by the Delhi Police without any charges for at least 48 hours. Violence had broken out a few days prior in Seelampur, a similar neighbourhood a few kilometres from New Seema Puri. Anti-CAA protestors and the police had clashed; Section 144 was imposed, 21 people were injured, the papers described it as a “pitched battle”, and the scene looked like it belonged to downtown Srinagar after stone-pelting. Following the violence, the police had swooped in on New Seema Puri, and had picked up several of Aslam’s friends for “questioning”. According to him, some of them had been warming themselves by a bonfire along with their Hindu friends, when a police team arrived, asked them their names, and bundled only the Muslim men into a van.

For a young Muslim man hamstrung by a lack of education and limited prospects in life, a lot can happen over 48 hours. (Just ask the women of Sambhal whose husbands, brothers, and children have been missing for days now, surfacing occasionally in jails far from their homes.) My aunt asked if he wanted to stay in our house until the trouble blew over, and she couldn’t have asked it soon enough. For the next few days, Aslam’s blanket became a fixture in the corner.

Why did my aunt take him in? Because my family – post-Partition Dilliwalas, Sikh – knows exactly what it’s like to be a minority and have a state machinery turn against you.

Demonstrators sing Indian National Anthem as a demonstration during a silent protest against a new citizenship law at Jama Masjid, in the old quarters of Delhi, India on January 15, 2020

At the fag end of 2019, the political had temporarily seeped into the personal. Just as it had in 1984. Just as it had in 1947. Even though upper-middle-class folks like us are more or less insulated from whatever turn history is taking, in the course of only two generations, my family has lived through two migrations – one physical, the other mental. Within 37 years, my family was forced to confront the same possibility twice, that the land that they’d built their homes and lives on, was no longer theirs. In 1947, an erratic line running through the heart of Punjab, an arbitrary writ of the government had deemed my family aliens; in 1984, friends and neighbours did the job of othering and demonising a community.

We’ve witnessed this before. We’re fully aware of what the subcontinent is capable of doing to its minorities.

A few weeks ago, in Muzaffarnagar in Uttar Pradesh, reports trickled in that the police and other forces had vandalised the homes of Muslims, and left upturned jars of grain and broken white goods in their trail. Residents apparently recalled the men saying, “Muslims will be thrown out of India, don’t damage the floor or walls, after all, all this will one day belong to us”. It’s striking, but not at all surprising, because we’ve heard these words before too.

As my family recalls, this is exactly what some of our neighbours said during the 1984 pogrom in Delhi. At the height of the violence, when attackers were roaming the streets with a list of Sikh houses and vehicles owned by them, one coolly asked my grandfather, “Why don’t you sign the house papers over to us? Either way we’ll take over.” Death was inevitable, he hinted. Another family, whom my grandfather had routinely helped financially, accompanied the goons to the 26 houses of Sikhs, urging them to kill everyone.

My family – post-Partition Dilliwalas, Sikh – knows exactly what it’s like to be a minority and have a state machinery turn against you.

These were neighbours we’d lived alongside for decades. Neighbours I would later grow up with. I have no idea how my family continued to do it, not when they lived through a period of utter terror, knowing that even the people closest to them, could not be trusted.

I was only a little baby during the ’84 pogrom, but my awareness of it is bookended by two mental images. The first is of my mother wearing a kirpan and walking down the bungalow-ed street where a part of my childhood was spent, to fetch milk for my cousin and I. It is undramatic, save for the fact that she’d never carried a kirpan before, and hasn’t since.

The other image is of two toddlers, my cousin and I, being fitted inside and smuggled out in a luggage case. As the violence swelled around Delhi and other parts of north India, my mother put her hopes in a suitcase – two sterilised feeding bottles, a set of clothes, nappies, and an empty section to hold two tiny bodies. Whenever she could, she slept in a salwar kameez, so she wouldn’t have to waste any time changing when the time came to run. Mercifully, that was an escape plan that they never had to execute.

My family almost never speaks about the terror of those days. Is it because they want to put the violence behind them and move on, just as their parents had to do before them? Is it the guilt of escaping a fate that might have been theirs had they been located elsewhere on the socio-economic grid?

Muslim women hold poster and shout slogan during a rally to protest against NRC, NPR and CAA 2019.

We were lucky, when so many others were not. The trials in the murders of Trilokpuri and Nand Nagri, drag on like a slothful beast: Nothing moves, not the course of justice, not the needle on closure. Take a look at “1984” photographer Gauri Gill’s searing pamphlet of photographs and writings, on the ongoing impact of the pogrom. One of those photographed is a man named Surjit Singh, who says, “I remember it clearly. As Indira Gandhi’s body burned on TV, my father was being burned… My father would give his old clothes to needy people in the colony. One of his killers was wearing something that he once used to wear.”

The document also includes an entry by writer Nilanjana Roy, where she recalls a young girl found in a Trilokpuri house. “The journalist who reported this said she stepped over corpses, and she said, standing on bodies in her home, ‘Please take me home.’ The official memory of 1984 is a blank… But we remember Trilokpuri. In the other history, the one written in dark blood on bone-white cold winter pages, we remember the girl who was home and couldn’t go back home.”

Where do you go, when your home is no longer home? We continued to stay, but where did the little girl go? Where do people like Aslam go?

The one difference between then and now, my Mama tells me, is the immediacy with which it all happened. The violence of ’84, driven by “the Sikhs had it coming” sentiment, seemingly sprang overnight. I don’t entirely agree, because that means that once the violence stopped, the faultlines disappeared too.

My family almost never speaks about the terror of those days.

They never did, and it takes precious little for them to be uncovered. A couple of weeks ago, as the CAA protests started gathering steam, I tweeted a video from an almost spontaneous gathering in Bandra’s Carter Road, a simple pan shot of the crowd. It prompted a gentleman on Twitter to label me a “bloody Khalistani”. I am an atheist who grew up in a Sikh family, but my name was enough for this gentleman to sum up my entire personality and existence. What the CAA has done, and done efficiently, is capitalise on those faultlines and turned them into law.

Which leaves us with a question I grapple with every day: What do we do? I am not sure I know all the answers, but as Avtar Singh wrote in a column for Time Out Delhi magazine in 2013, after a trial court acquitted Congress leader Sajjan Kumar of his role in the violence of ’84: “Always remember. Even when, especially when, one of them is let off again, as they will continue to be. You can move on without forgetting, never mind what all the apologists and advocates of amnesia say… Where’ll they go? We’ve got all the time in the world.”

Kumar’s verdict was later reversed, and he was sentenced to life imprisonment. Time had, indeed, caught up with him. Will we be able to say the same thing about those who have perpetrated the violence in Muzaffarnagar, in Bijnor, in Mangalore, in Sambhal, in Aligarh, and in Delhi?

Time will take its course, but for now, for us, maybe it is enough to remember. Remember that the future is only a version of the past. Remember what a community that has been demonised can be subjected to. Most of all, remember what a majority community is capable of unleashing, when they let go of – even temporarily – what makes them human.