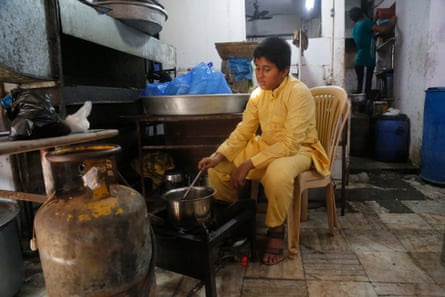 Subhan Shaikh used to start the day with a cup of cinnamon-flavoured tea, brought to him by his mother, Sitara, before he got ready for school. But the lockdown in March brought her salary as a school bus attendant to an end, and providing food – never mind tea – for Subhan, 14, and his two younger sisters, became a challenge.

Today, life for Subhan revolves around tea, which has become a lifeline for his family. After seeing his mother struggle, Subhan decided to do something and became a tea seller on the streets of Mumbai.

From 2pm Subhan is allowed to borrow the stove in the corner of a food stall in Bhendi Bazaar to make a big pan of milky tea. He strains the tea into a large thermos flask, hangs it precariously on his bicycle handlebars and sets off to sell it in tiny paper cups for five rupees each.

There is no shortage of customers as Indians drink tea endlessly throughout the day. “I go around all day until about 10pm. I make about 250 rupees (£2.50) every day which I give to mum to buy vegetables,” says Subhan, speaking on the phone from Mumbai.

Subhan’s family is typical of millions of Indian’s urban poor, who have been pushed further into poverty by the impact of Covid-19 on jobs and incomes. All dreams of educating children to give them a better life have been put aside for now.

Each afternoon Subhan is borrows the stove of a food stall in Bhendi Bazaar to make tea to sell. Photograph: Emmanual Yogini

For families like his, there is no furlough scheme, social security payments or any other safety net to fall back on. There is simply the kindness of strangers such as the stall owner who let Subhan use his stove. Many have no money to pay the rent for their homes in the slums and have already borrowed from relatives and sold what few possessions they have for food.

Parts of the Indian economy are now recovering, but tens of millions of people have not got their jobs back. For small business owners, such as those producing clothes or toys in tiny workshops, the orders are no longer coming in. Many are unable to sleep amid anxiety over the inability to repay loans taken out to start their business in the first place.

Children like Subhan are doing whatever work they can find to help their families, working alongside former teachers and engineers now selling vegetables for a pittance on the street. Many maids and cooks are also out of work, as fear of coronavirus and awareness of poor sanitation and weak immune systems in the slums make employers wary of letting them back into their homes.

Vandana Sharma, 33, a beautician in New Delhi, said the beauty parlour where she had worked for 10 years has closed for good. Her husband used to print posters and her mother-in-law worked in a tyre factory but both jobs went in June. The family has had to move in with relatives after the landlord threw them out over unpaid rent.

Sharma says the thought of begging has crossed her mind a few times but it makes her shudder. “I am willing to go to women’s homes to give facials and pedicures but they are too scared to let me in. My main worry is my little girl because I can’t give her nutritious food. How will she grow up healthy?” she says.

Even before the pandemic India’s urban poor were living on the edge, just about managing to feed, clothe and house themselves through Herculean daily efforts. The pandemic has brought back the extreme poverty from which many had only recently emerged.

In her previous job, Sitara Shaikh, 33, could feed her children and send them to the local state school. Her husband abandoned her 11 years ago, and does not help to support the family financially.

Now those days seem like a happy dream. “It upsets me that Subhan didn’t even know how to make tea before and now he spends all day selling it,” says Sitara. “I worry about him in all that traffic. It’s too much responsibility for a 14-year-old. But I can’t find a job and there is no sign of schools reopening yet, which would allow me to resume my job.”

Subhan’s customers – mostly traders, shopkeepers, drivers, and auto rickshaw wallahs sitting outside – notice his age and chat with him. “They tell me I am a good boy to help my mother,” he says.

These days he has to walk 2km from his home in Byculla in the south of the city to the food owner’s stall and back because the tyres of his bicycle are damaged and he does not have the 800 rupees (£8) he needs to have them repaired.

He has also learned the meaning of the word “competitive”, he says.

“There are lots of tea-sellers,” he says. “What makes it hard is not having my own fixed spot where I can put up my stall. Walking around all day with a thermos is difficult.”

As he winds his way through the traffic and crowds of the city, he keeps telling himself that tea-selling is temporary and that when schools reopen, he will go back to his former life and his dreams of becoming a pilot.

“I have promised mum that one day she will be sitting in a plane that I will be flying,” he says.