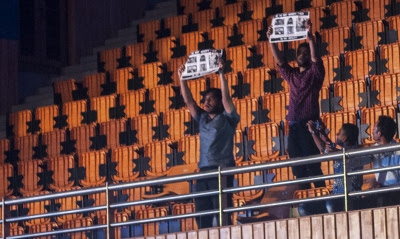 Just when the inaugural had formally ended, chief guest had spoken and the administration was on the cusp of heaving a sigh of relief for a ‘trouble free beginning’ and was contemplating to ‘pat its own back’ for managing to save its ‘image’ the precints of the Shyama Prasad Mukherjee Stadium reverberated with slogans in favour of the historic FTII struggle.

This struggle, which had continued for around five months since 12 th June , a struggle against political appointments at one of the most prestigious institutions of India which was also a wake up call at the systematic attempts underway since the ascendance of the Modi regime at centre to undermine the academic autonomy of universities and educational institutions, as everybody knows has received tremendous national-international support.

Slogans were loud enough that all the celebrities and dignitaries who had gathered there heard them.

‘It was heard by Information and Broadcasting Minister Arun Jaitley, his state minister Rajyawardhan Rathore, defence minister Manohar Parrikar and all the I&B ministry officials.

Two alumni of FTII found an empty block on top, where they were seated silently till the whole inaugural ceremony ended.’

Security people who were present there in large numbers pounced on the two of them – Kislay, a young film director, an alumni of FTII, who has received critical acclaim for his very first film and Shubham, another alumni of FTII – and according to a facebook post (https://www.facebook.com/FTII-Wisdom-Tree-1607915209448356/?fref=ts) both of them have been badly beaten by the Goan police for showing the placards and shouting slogans… They are still under the police custody and being interrogated.

As of now they have been detained in Agassaim Police Station and would be presented before the magistrate. It is also learnt that they are being ‘charged with serious offences’

It is important to note that the authorities at various levels went out of way just to ensure that the voice of FTII students does not reach the IFFI. It ‘ensured’ that this year the festival would not screen a single film by students of the prestigious FTII whereas in recent years, at least five FTII entries could make it to the screening of this annual fest.

As opposed to its regular practice of paying for the conveyance and accomodation of its students who had enrolled for the same, the FTII administration took an adhoc decision and told the students to bear their own expenses.

But despite all their attempts to intimidate the students into silence the voice did reach IFFI. It is definitely a victory of sorts – albeit of a symbolic kind.

There is no doubt that this struggle of the FTII students would continue to receive the support which it has received from artists, intellectuals, film personalities and all those people who believe are opposed to the dumbing down of society under all pretexts.

If possible contact the Goa police – especially its higher officials – and ensure that the two are not further harmed and released immediately without any charges.

Glory to the struggle of FTII students.

The FTII students had been striking for almost 139 days since 12 June, protesting the appointment of Gajendra Chauhan as the institute’s director.

The strike was called off on 29 October, stating that their protests would continue.

The striking students have a simple demand: appoint a competent person as the director, not a party henchman who is equally incompetent.

The students have also announced to screen two films they produced during the strike, at the IFFI.