G7 meet hides ‘ugly side’ of corporatisation of medicine, privatisation of vaccine production 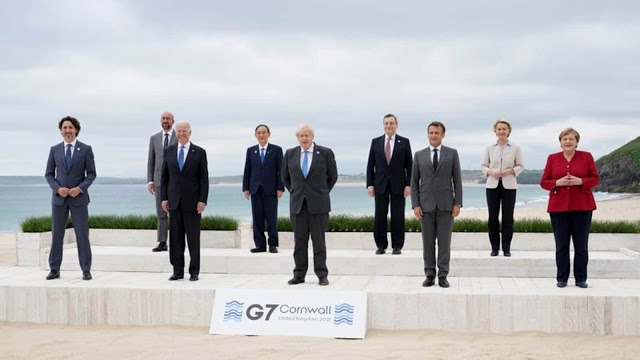 The recently concluded meetings of the leaders of the Group of Seven (G7) countries in Cornwall from June 11 to 13, 2021, have reaffirmed their commitment to a post pandemic world based on twin planks; i) revive capitalism and ii) reinstate imperialism. These twin decaying and dangerous ideals are central to the Carbis Bay G7 Summit Communique by the White House on June 15, 2021.
It follows the same old imperialist propaganda model in the name of ‘freedom, democracy and multiculturalism’ to capture the innate goodness of the masses. The summit did not spare any opportunity to isolate Russia and China. The jamboree of the Carbis Bay imperialism is trying to expand its imperialist legitimacy by inviting leaders from the postcolonial countries like Australia, India, South Africa, and South Korea.
The agenda for global actions are designed to restore imperialist hegemony by outsourcing its failures to China, North Korea and Russia. These three countries are the devils in old imperialist playbook. The slanderous campaign against these countries as ‘a systemic challenge’ is part of the imperialist mind ghettoised ideals of colonial hangover.The Carbis Bay G7 Summit Communique by the White House talks about ending the pandemic by “increasing and coordinating on global manufacturing capacity on all continents; improving early warning systems; and support science in a mission to shorten the cycle for the development of safe and effective vaccines, treatments and tests”.
This vague commitment hides the ugly side of the corporatisation of medicine, privatisation of vaccine production and distribution by the giant pharmaceutical corporations. The global health crisis before the pandemic is the net outcome of privatisation of health services that failed to protect life during the pandemic.
The privatisation of health service is not an alternative for post pandemic global health security. The hoarding of vaccines by the developed countries can never be branded as global approach to ending pandemic.
Post-pandemic world deserves peace, stability, human development, security. Ethos of  Carbis Bay submit is destroying these hopesThe Communique promises to reinvigorate the economy and advance its recovery with $12 trillion of support plan. It failed to outline the details about the plans. The history of crisis reveals that the capitalist states and governments provide support to the bankers, industrialists and corporates for their recovery while working people face basic survival challenges.
The Communique further promises to secure prosperity with the old model of free and fair trade. The centuries of free trade has revealed that it is neither free nor fair. It is colonial in spirit and imperialist in practice.

The free trade has helped the corporates to consolidate their wealth by plundering people and the planet. It ruined the life and livelihoods of people and destroyed environment. The promise of green revolution and the idea of climate finance under capitalism is the idea of salvation after death.
The global partnership is impossible without democratisation of IMF, World Bank and WTO. The global economic infrastructure needs democratisation to strengthen partnership. However, the Carbis Bay G7 Summit is silent on the democratisation agenda of these powerful institutions.

These institutions protect the interested of the advance capitalist countries ensuring neo-colonialism and neo-imperialism by implementing policies detrimental to people across the globe. Therefore, the promises of ‘democracy, freedom, equality, the rule of law and respect for human rights’ are myths under capitalist system where people suffer without medicine, food, water and oxygen.
The pandemic has revealed the failures of privatisation of health. The G7 Summit promises ‘at least $2¾ billion for the Global Partnership for education’. The privatisation and commercialisation of education has not only destroyed the availability and accessibilities to basic education but also ruined the quality of education in all levels.

The colonialism and imperialism are two basic pillars of the G-7 countries committed to capitalist global system. The Shared Agenda for Global Action by the G-7 is a statement of shared vision and ambition to expand unbridled capitalism, which destroys democracy, freedom, human rights and environment. The Carbis Bay submit in Cornwall revives the colonial and imperialist hangover of the G7 countries.
The Secretary-General of NATO, Jens Stoltenberg in Brussels started the slanderous campaign against China immediately after the Carbis Bay G7 Summit Communique by the White House. The revival of NATO’s legitimacy is an instant outcome of the G7 meeting. It intends to revive the delaying military-industrial alliances in the post pandemic world by reviving military conflicts. The G7 summit has crystalised the anti-Russian and anti-Chinese axis led by USA.
The crisis produces profit. The corporates flourish and people perish during this pandemic. The imperialist and colonial world system led by the G7 countries did not show any concern for people while ensuring profits for corporates. The hegemonic agendas of G7 countries are threatening world peace and destroying all abilities of people and their governments moving in the direction of prosperity.
The ideological propaganda, trade and military warfare are three strategic directions of the G7 countries. The post pandemic world deserves peace, stability, human development and security. The ethos of the Carbis Bay submit is destroying these hopes by reviving old colonial and imperialist designs.
—
*University of Glasgow, UK