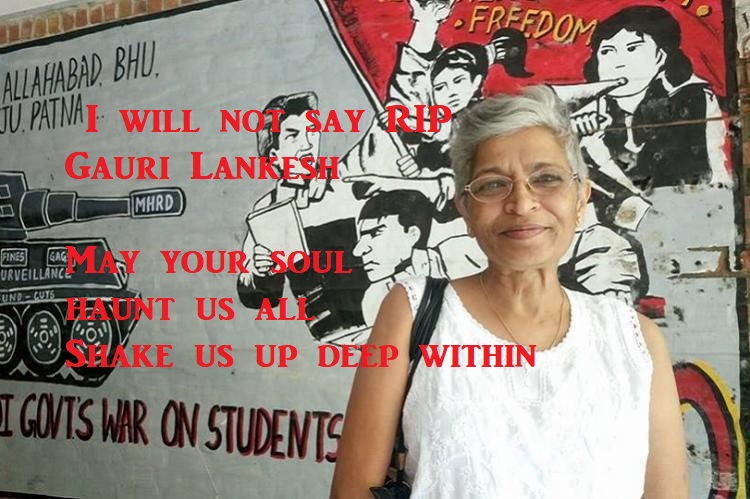 The dispute between the forensic sciences labs (FSLs) of Mumbai, Bengaluru and Ahmedabad over the analysis reports of cartridges recovered from their murder scenes has delayed the handing over of the cartridges. Journalist Gauri Lankesh ‘s family grieve during her funeral, in Bengaluru on September 6, 2017. Lankesh was shot in cold blood outside her home by unknown assailants. (PTI Photo)

The special investigation team probing the murder of senior journalist Gauri Lankesh has been unable to compare the cartridges recovered from the crime scene amid a dispute among three forensics laboratories over the analysis of cases recovered from the scenes of three other high-profile killings.

Lankesh was gunned down outside her house in the city by unidentified assassins on September 5 and the police are yet to crack the case. Over the past four months, the state government and the SIT have come under increasing pressure to ensure that the case is solved soon.

The local forensic science lab had confirmed in September that the bullets that killed Lankesh were fired from a 7.65mm country-made pistol.

The modus operandi in the killing of Lankesh bears a striking resemblance to those of Kannada scholar MM Kalburgi, rationalist Narendra Dabholkar and communist leader Govind Pansare but, the inability to compare the cartridges has meant that there is no conclusive evidence to prove that there is a link to the other murders.

Dabholkar was shot dead near his home in Shaniwar Peth in 2013, Pansare died of wounds after being shot in 2015, and Kalburgi was killed by a hail of bullets in Dharwad in 2015.

The dispute between the forensic sciences labs (FSLs) of Mumbai, Bengaluru and Ahmedabad over the analysis reports of cartridges recovered from their murder scenes has delayed the handing over of the cartridges.

In 2015, the forensic analysis of cartridges recovered from the scenes of the murder of Kalburgi, Dabholkar and Pansare provided evidence that the same group might have been involved in the crimes. This was disputed by the Mumbai FSL.

“The Bengaluru FSL has photographs of the cartridges found from the scene of the murder of Kalburgi, but we need the actual cartridge to conduct a 360-degree analysis because only that will be permissible as evidence,” an officer said.

So far, the SIT has hit a dead-end in its investigation on multiple fronts. It had gathered closed-circuit television (CCTV) camera footage of a reconnaissance conducted by two people riding two-wheelers, but these did not have any numbers on the plates.

“There were around 13,000 bikes of that model in Karnataka, of these we have been unable to trace around 500,” the officer said.

Footage taken from a camera installed above Lankesh’s door, which captured the crime, too, has yielded little.

“We know, for example, that the killer was a trained professional because he appears in the footage for a total of five seconds. Within two seconds he fires four bullets at Lankesh and in another two seconds he flees the spot,” the officer said.

The officer said in this footage the model of the two-wheeler used was not clear. Besides, he said, the trail of CCTV footage runs cold after about 200 metres. Sketches released of the suspects, corroborated with eyewitness accounts, have also not provided a breakthrough, the officer said.

In addition to this, the SIT received call data dump with around 70 million calls made over a five-day period between September 1 and 5.

“We have so far analysed around 20 million calls but it is unlikely that the perpetrators would have switched on their phones while conducting reconnaissance or while committing the crime,” the officer said.

The SIT had also probed illegal arms dealers in the state. This, too, has yielded little information.

“We have to now go back to older forms of policing,” the officer said.

“About 99% of the cases now are solved because of digital data, be it call records, cell tower data or CCTV footage. In this case, these avenues have provided little,” the officer added.

The SIT is hoping for a quick resolution of the dispute between the forensics labs so that it can get the cartridges to conduct an analysis soon.