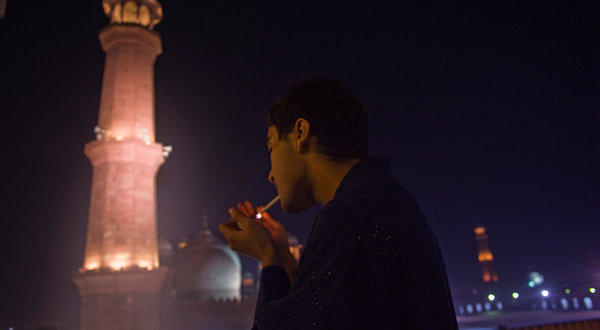 HIDING IN PLAIN SIGHT Ali, a gay man who lives in Lahore, is in a support group for lesbian, gay, bisexual and transgender Pakistanis. “The gay scene here is very hush-hush,” he says.

Max Becherer for the International Herald Tribune-A street in bustling Lahore. Displays of affection between men in public, like hugging and holding hands, are a common sight.

The group is invitation only, by word of mouth. Members communicate through an e-mail list and are careful not to jeopardize the location of their meetings. One room is reserved for “crisis situations,” when someone may need a place to hide, most often from her own family. This is their safe space — a support group for lesbian, gay, bisexual and transgender Pakistanis.

“The gay scene here is very hush-hush,” said Ali, a member who did not want his full name used. “I wish it was a bit more open, but you make do with what you have.”

That is slowly changing as a relative handful of younger gays and lesbians, many educated in the West, seek to foster more acceptance of their sexuality and to carve out an identity, even in a climate of religious conservatism.

Homosexual acts remain illegal in Pakistan, based on laws constructed by the British during colonial rule. No civil rights legislation exists to protect gays and lesbians from discrimination.

But the reality is far more complex, more akin to “don’t ask, don’t tell” than a state-sponsored witch hunt. For a long time, the state’s willful blindness has provided space enough for gays and lesbians. They socialize, organize, date and even live together as couples, though discreetly.

One journalist, in his early 40s, has been living as a gay man in Pakistan for almost two decades. “It’s very easy being gay here, to be honest,” he said, though he and several others interviewed did not want their names used for fear of the social and legal repercussions. “You can live without being hassled about it,” he said, “as long as you are not wearing a pink tutu and running down the street carrying a rainbow flag.”

The reason is that while the notion of homosexuality may be taboo, homosocial, and even homosexual, behavior is common enough. Pakistani society is sharply segregated on gender lines, with taboos about extramarital sex that make it almost harder to conduct a secret heterosexual romance than a homosexual one. Displays of affection between men in public, like hugging and holding hands, are common. “A guy can be with a guy anytime, anywhere, and no one will raise an eyebrow,” the journalist said.

For many in his and previous generations, he said, same-sex attraction was not necessarily an issue because it did not involve questions of identity. Many Pakistani men who have sex with men do not think of themselves as gay. Some do it regularly, when they need a break from their wives, they say, and some for money.

But all the examples of homosexual relations — in Sufi poetry, Urdu literature or discreet sexual conduct — occur within the private sphere, said Hina Jilani, a human rights lawyer and activist for women’s and minority rights. Homoeroticism can be expressed but not named.

“The biggest hurdle,” Ms. Jilani said, “is finding the proper context in which to bring this issue out into the open.”

That is what the gay and lesbian support group in Lahore is slowly seeking to do, even if it still meets in what amounts to near secrecy.

The driving force behind the group comes from two women, ages 30 and 33. They are keenly aware of the oddity that two women, partners no less, have become architects of the modern gay scene in Lahore; if gay and bisexual men barely register in the collective societal consciousness of Pakistan, their female counterparts are even less visible.

“The organizing came from my personal experience of extreme isolation, the sense of being alone and different,” the 30-year-old said.

She decided that she needed to find others like her in Pakistan. Eight people, mostly the couple’s friends, attended the first meeting in January 2009.

Two months later, the two women formed an activist group they call O. They asked for its full name not to be published because it is registered as a nongovernmental organization with the government, with its true purpose concealed because of the laws against homosexual acts.

O conducts research into lesbian, gay, bisexual and transgender issues, provides legal advice and has helped remove people from difficult family situations, and in one case a foreign-operated prostitution ring. The group has made a conscious decision to focus its efforts on the dynamic of family and building social acceptance and awareness rather than directly tackling legal discrimination.

Their current fight is not to overturn Article 377 of the Pakistan Penal Code, on “Unnatural Offenses,” but to influence parents’ deciding whether or not to shun their gay child. They see this approach as ultimately more productive.

“If you talk about space in Pakistan in terms of milestones that happen in the other parts of the world like pride parades or legal reform or whatever, that’s not going to happen for a long time,” the 33-year-old organizer, who identifies as bisexual, said. “Families making space — that’s what’s important to us right now.” Both women say their families have accepted them, though it was a process.

There are distinct class differences at work here, particularly when it comes to self-definition. Most of those actively involved in fostering the gay and lesbian community in Pakistan, even if they have not been educated abroad, are usually college graduates and are familiar with the evolution of Western thought concerning sexuality. Mostly city-dwellers, they come from families whose parents can afford to send their children to school.

Those who identify themselves as gay here are usually middle and upper middle class, the 33-year-old woman said. “You will get lower middle class or working-class women refusing to call themselves lesbian because that to them is an insult, so they’ll say ‘woman loving woman.’ ”

While the journalist lives relatively openly as a gay man, and says his immediate family accepts it, he understands that older gays have separated sexuality from identity, and he also recognizes that this approach is changing.

Still, he sees the potential for serious conflict for younger Pakistanis who are growing up with a more westernized sense of sexual identity.

“They’ve got all the access to content coming from a Western space, but they don’t have the outlets for expression that exist over there,” he said. “Inevitably they will feel a much greater sense of frustration and express it in ways that my generation wouldn’t have.”

That clash of ideologies was evident last year on June 26, when the American Embassy in Islamabad held its first lesbian, gay, bisexual and transgender pride celebration. The display of support for gay rights prompted a backlash, setting off demonstrations in Karachi and Lahore, and protesters clashing with the police outside the diplomatic enclave in Islamabad. This year, the embassy said, it held a similar event but did not issue a news release about it.

“It is the policy of the United States government to support and promote equal rights for all human beings,” an embassy spokeswoman, Rian Harris, said by e-mail when asked about the backlash. “We are committed to standing up for these values around the world, including here in Pakistan.”

Well intended as it may have been, the event was seen by many in Pakistan’s gay community as detrimental to their cause. The 33-year-old activist strongly believes it was a mistake.

“The damage that the U.S. pride event has done is colossal,” she said, “just in terms of creating an atmosphere of fear that was not there before. The public eye is not what we need right now.”

Despite the hostile climate, both the support group and O continue their work. O is currently researching violence against lesbian, bisexual and transgender Pakistanis.

“In a way, we are just role models for each other,” the 30-year-old said. When she was growing up, she said, she did not know anyone who was gay and she could not imagine such a life.

“For me the whole activism is to create that space in which we can imagine a future for ourselves, and not even imagine but live that future,” she said. “And we are living it. I’m living my own impossibility.”

Shocker - Indian Govt behind Parliament attack, 26/11: Ishrat probe officer
Married Women in Maharashtra can keep maiden name need not take husbands' surname
#Mumbai - After sexual harassment at workplace, woman faces online slander #Vaw
Forget your right to eat what you want, the fight is now not to be killed #BeefKilling