Gay-rights literature takes off in #India 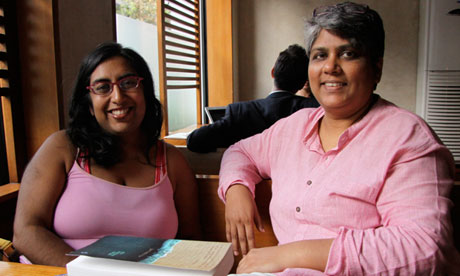 Editor Minal Hajratwala (left) and editor Shobhna Kumar: releasing an anthology of stories about being gay and lesbian in India. Photograph: Sylvia Rowley

The Guardian by  -Sylvia Rowley

A transgender Sikh comes to terms with a vagina, a Maharashtrian motorcycling champion tells of her hidden sexuality, and an unwitting lesbian is drawn into the Mumbai underworld.

Until three years ago, homosexuality was illegal in India and stories like these about the lives of queer Indians remained largely untold. Now, emboldened by legal recognition and a growing gay-rights movement, queer Indians are starting to speak up. Threats from religious activists against Salman Rushdie prompted him to pull out of India’s biggest literature festival earlier this year but the event’s first panel on queer writing barely raised an eyebrow.

Since then an anthology of queer erotica has hit the shelves, HarperCollins India has published a novel with a gay protagonist, and this month sees the release of Out! Stories from the New Queer India, an anthology of 30 contemporary stories about being queer and Indian from publisher Shobhna Kumar and editor Minal Hajratwala, both lesbians of Indian descent. “For 20 years since I came out I’ve been reading every single thing I can get my hands on that’s queer and Indian, even marginally so, you know even just a hint of queer in there,” laughs Hajratwala, who lives in the US.

“When we got the first round of submissions in I thought, ‘Wow, I have never seen this kind of thing before; the characters are totally different.’ I don’t think the story of how a Sikh mother feels about her son becoming her daughter has ever been told.”

The stories span gender identities, classes and cultures and some are translated from regional languages such as Tamil. One tells a wife’s story of finding out her business executive husband is bisexual and HIV positive, another is about the suicide of a lesbian couple in a rural village. A third sees two female were-lions (think werewolves) with henna tattoos falling in love in the bath.

Queer writing was published in India before section 377 of the Indian penal code – a colonial law banning homosexuality – was overturned in 2009. But the tone of these new stories is very different says Kumar, who began her company Queer Ink by posting imported gay novels to customers in brown paper envelopes. “After 377, writers feel a lot more empowered to write their stories – even if some remain anonymous,” she explains. “They’re saying: ‘I’m here, I’m queer, and there’s nothing wrong with that.’ They are not victims.”

The legal change has not transformed social attitudes overnight, and many groups still oppose the judgment. But the vast amount of media coverage that accompanied decriminalisation did drag discussions of homosexuality from the taboo to the mainstream. “Dinner-table discussions probably include the words lesbian and gay now,” says Kumar.

Stories of lesbians in particular have come to the fore in recent years as women’s social situation has shifted. “As the economy in India has changed, more women are working and have an independent income – some are living in the city by themselves,” says Hajratwala. “There’s a new scope for sexual agency that would not have been there maybe a generation ago.”

Nevertheless, it took Kumar six months to protect the authors by ensuring that legal responsibility for a book’s content lies with the publisher, not the individual authors, if the work is deemed offensive under India’s indecency laws. Many still chose to remain anonymous.

“It’s a really exciting time in India to be queer and to be part of that movement,” says Hajratwala. “Every book is an artefact of its time, and this is real, tangible evidence that a vibrant queer community in India exists.”

• Out! Stories from the New Queer India is available at queer-ink.com

Supreme Court of India - 'Revolving door' in lawsuits
PAKISTAN: The body of a Hindu Dalit was exhumed and desecrated after a Muslim mob removed it from a...
India - Two Families, Two Deaths & the Long Wait for Justice
India needs sewage systems, not free toilets Swachh Bharat Abhiyan