The struggle to survive in Gaza will not end with this war. 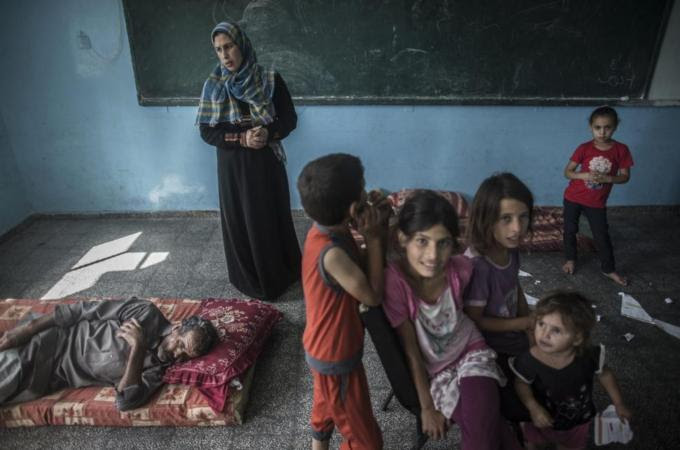 To a child in Gaza:

On November 21, 2012, during the second Israeli offensive on Gaza, I wrote an opinion piece for Al Jazeera “Steal what you will from the blueness of the sea and the sand of memory”.

Today, I could have asked Al Jazeera to simply republish the same article, with minor changes in the family and children’s names, and some new photos. Back then, we thought that what was happening was a testimony to the old history-repeats-itself concept.

But today, even that rhetoric has lost its redundant meaning: The fact that history repeats itself makes it sound fitting for Gaza to be hit by an Israeli offensive every other year, with the same circumstances that include a seemingly everlasting siege, dire political and economic situations, new Egyptian regimes’ complicity, worsening Arab negativity, the Palestinian Authority’s total detachment and pathetic stance against Israel, and so on.

Like many children her age, Sara has survived three horrific offensives against Gaza. In fact, every single child above the age of six has witnessed the three offences, or at least those who were lucky enough to have survived the three. I remember my great grandmother, who only witnessed the first offensive in 2008, saying that it was the worse of any attacks on Gaza – and she had seen many: the Ottoman, the British, the Zionist. What will Sara and other children her age compare these offensives to when they talk to their grandchildren?

The majority of the over 200 martyrs in Gaza so far have been civilians, also identified as “collateral damage” by Israel, which blames them for living in Hamas-governed Gaza. Any of the 1.8 million Palestinians living on Gaza’s 365sq km are potential victims to collateral damage. The Al-Batsh family (18 members) was killed, and six other families lost four to eight members.

What details do I need to recount? What stories about the dead must we tell in order for the world to feel for them? Each of the spirits that we lost had their own story to tell, their own memories and dreams, and who knows, one of the Tawjihi (high school final examination and results were published today in Palestine) students who was killed might have come up with a cure for cancer.

With ceasefire talks in the air and various parties calling on Gaza to accept the proposed ceasefire agreement in an effort to stop the death of civilians, it seems that our martyrs had lost their lives only to be added in a generous death toll of civilians that can be bargained with by different sides. However, if this ceasefire agreement is only valid for two or three years until Israel is ready to launch a fourth offensive, we don’t need it.

To a child in Gaza:

It’s the year 2017, the centennial of the Balfour Declaration, the spark that ignited all the wars that count as days of our lives. It’s the year 2017, the centennial of World War I, for which Gaza was a hot spot. The British Army, led by Edmund Allenby, fought three battles with Gaza en route to Jerusalem. The people of Gaza, their cactus groves, and the Ottoman army won the first two battles, keeping the British away from Palestine.

The only way the British won the third battle was with the help of traitors, and that was how Allenby occupied Jerusalem. From then on, a trail of countless wars and massacres followed Palestinians wherever they went.

It’s the year 2017, and on the calendar of war, we read about the likelihood of a new Israeli offensive. Will it happen, or will it not? In the past year (2016), Gaza ran out of drinkable water. In five years, the World Cup will be held in an Arab country. Will the electricity problem be solved by then so we can watch it without interruptions? Ah. We must ask Gaza 2020. Wait a second; Gaza will turn into an unlivable place even before we get to watch the World Cup in an Arab country?

We do not have to wait long before announcing a water or electricity crisis in Gaza – we already suffer from both. With a rapidly increasing population comes a rapidly decreasing habitat, and decreasing agricultural and industrial lands.

We might make it through this war alive, only to prepare for the next one, while continuing to live under a suffocating Israeli-Egyptian-PA blockade. But there is one thing we know for sure: Our dignity is nourished by our suffering. We are currently witnessing an unmatched sense of solidarity, unity and communal support in Gaza and in Palestine in general – certainly more genuine than the acclaimed “unity” in the failed coalition government.

We are able to provide for ourselves and to remain strong like we always have. We have lost all faith in support from the world or from the Arabs, who decided to summon up in an “emergency” Arab League meeting eight days through the offensive. That is to say, we wake up in Gaza every morning to say, “We in Gaza are well, how is your conscience doing?”

Yasmeen El Khoudary is a freelance writer based in Gaza, occupied Palestine. She blogs at yelkhoudary.blogspot.com/.