It cites what it describes as the “de-development” of the blockaded coastal strip, which is at present home to some 1.8 million Palestinians but is expected to grow to 2.1 million by 2020.

“De-development” describes a process where development is not only hindered but actually reversed. Findings by the UN conference on trade and development point to the eight-year economic blockade of Gaza as well as the three wars between Israel and the Palestinians over the past six years.

Depicting the situation in Gaza in grim language the report states: “Three Israeli military operations in the past six years, in addition to eight years of economic blockade, have ravaged the already debilitated infrastructure of Gaza, shattered its productive base, left no time for meaningful reconstruction or economic recovery and impoverished the Palestinian population in Gaza, rendering their economic wellbeing worse than the level of two decades previous.

“The most recent military operation compounded already dire socioeconomic conditions and accelerated de-development in the Occupied Palestinian Territory, a process by which development is not merely hindered but reversed.”

The report was published even as Egyptian military bulldozers continued to press ahead with a project that will effectively fill Egypt’s Gaza Strip border with water and flood the last remaining cross-border underground smuggling tunnels that have brought both commercial items and weapons into Gaza.

It also follows a series of recent dire warnings over Gaza’s trajectory by international bodies including UN organisations.

In May the World Bank said the long-lasting blockades by Israel and more recently Egypt, combined with war and poor governance, had strangled Gaza’s economy leaving it with the highest unemployment rate in the world at 43% of the population.

The latest report reinforces similar warnings delivered by the top officials in the main UN relief agency in Gaza – UNRWA – in 2012, which projected that on current trends of population growth Gaza would hit a crisis point in 2020.

The latest report highlights the severe crises in Gaza related to water and electricity, as well as the destruction of vital infrastructure during Israeli military operations in July and August 2014.

Citing the reliance of Gaza’s 1.8 million inhabitants on coastal aquifers as their main source of freshwater, it adds that 95% of this water is not safe to drink. The report also cites growing food insecurity affecting 72% of households, with half the population of Gaza receiving some food aid.

The report estimates that direct losses (excluding people killed) of three Israeli military operations that took place from 2008 to 2014 are equal to three times the size of Gaza’s local gross domestic product.

The 2014 war displaced half a million people and left parts of Gaza destroyed. 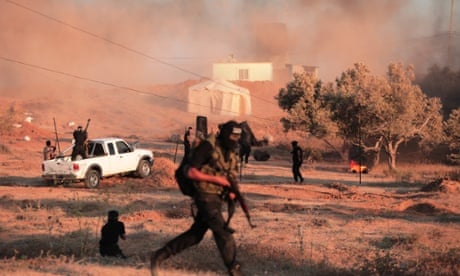 The report adds that recent wars had “effectively eliminated what was left of the middle class, sending almost all of the population into destitution and dependence on international humanitarian aid”, the new report says.

The wars had shattered Gaza’s ability to export and produce for the domestic market and left no time for reconstruction, the report said.

Israel and Egypt have maintained a blockade of Gaza since the Islamic militant group Hamas took control of the territory in 2007.

The report calls the economic prospects for 2015 for the Palestinian territories “bleak” because of the unstable political situation, reduced aid and the slow pace of reconstruction.

The latest bleak warnings over Gaza have emerged as the Egyptian military has pressed ahead with its efforts to shut down the last smuggling tunnels into Gaza by constructing an extensive area of military-run fish-farms along the Gaza border that would flood any tunnels.

Egypt’s army began digging last week what anonymous officials have said will be 18 fisheries along the nine-mile Gaza border whose effect would be to prevent tunnel digging. According to reports a previous plan to dig a canal was rejected after it became clear the water would flood the border completely.