Gerda Lerner, a Feminist and Historian, Dies at 92 #Obituary 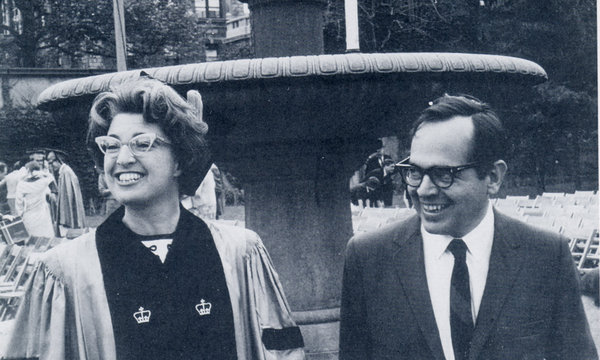 Gerda Lerner and her husband, Carl, in 1966, at her graduation from Columbia with a doctorate.

Her death was confirmed by Steve J. Stern, a history professor and friend at the University of Wisconsin-Madison, where Dr. Lerner had taught for many years.

In the mid-1960s, armed with a doctorate in history from Columbia University and a dissertation on two abolitionist sisters from South Carolina, Dr. Lerner entered an academic world in which women’s history scarcely existed. The number of historians interested in the subject, she told The New York Times in 1973, “could have fit into a telephone booth.”

“In my courses, the teachers told me about a world in which ostensibly one-half the human race is doing everything significant and the other half doesn’t exist,” Dr. Lerner told The Chicago Tribune in 1993. “I asked myself how this checked against my own life experience. ‘This is garbage; this is not the world in which I have lived,’ I said.”

That picture changed rapidly, in large part because of her efforts while teaching at Sarah Lawrence College in the early 1970s. In creating a graduate program there, Dr. Lerner set about trying to establish women’s history as a respected academic discipline and to raising the status of women in the historical profession. She also began gathering and publishing the primary source material — diaries, letters, speeches and so on — that would allow historians to reconstruct the lives of women.

“She made it happen,” said Alice Kessler-Harris, a history professor at Columbia. “She established women’s history as not just a valid but a central area of scholarship. If you look at any library today, you will see hundreds of books on the subject.”

Gerda Hedwig Kronstein was born on April 30, 1920, in Vienna, where her father, Robert, owned a large pharmacy. Her mother, the former Ilona Neumann, a free-spirited bohemian at heart, tried unsuccessfully to reconcile her budding career as an artist with her duties as a housewife and mother. This struggle made a marked impression on her daughter.

Immediately after Germany annexed Austria in 1938, Dr. Lerner’s father, a Jew, was tipped off that he was about to be arrested. As a hedge, he had started a pharmacy in Liechtenstein, and there he fled, whereupon the Gestapo arrested his wife and daughter to force his return. Five weeks later, after he sold his Austrian assets for a nominal sum, his wife and daughter were released and left for Liechtenstein as well.

“It was the most important experience of my life, because I didn’t think that I was going to come out alive,” Dr. Lerner told The Chicago Tribune in 1993.

A more thorough investigation by the Gestapo might have revealed that their young prisoner had been doing underground work for the Communists for several years.

Through a marriage of convenience, Gerda Kronstein made her way to New York, where she worked in menial jobs and trained at Sydenham Hospital in Harlem as an X-ray technician. As a saleswoman at a Fifth Avenue candy store, she was fired after she reported her employers to the Labor Department for paying their factory workers less than the minimum wage.

In 1941, she married Carl Lerner, a theater director and Communist who helped her polish her halting English by having her repeat tongue-twisters like “Mae West is wearing a vest.” The couple moved to Hollywood, where Mr. Lerner became an apprentice film editor.

Dr. Lerner placed a short story based on her jail experience, “Prisoners,” in The Clipper, a liberal literary journal, joined the Communist Party and began working with community groups to organize supermarket boycotts and neighborhood child care centers.

“I was unduly intense, super-serious, incapable of small talk or the kind of friendly gossip that hold acquaintances together,” she wrote in “Fireweed: A Political Autobiography” (2002). “My perfectionism, insistence on anti-fascist commitment in word and deed, and general ‘heaviness’ as a person set me apart from others.”

Because of his politics, Mr. Lerner found it increasingly hard to find work in Hollywood, so in 1949 the couple returned to New York, where he became a top film editor, working on “Twelve Angry Men,” “Requiem for a Heavyweight,” “Klute” and other films. In 1964, the two collaborated on the film “Black Like Me,” based on the 1961 book by the Southern white journalist John Howard Griffin that recounted his experiences disguised as a black man in the Deep South. Mr. Lerner directed, and together they helped adapt the book for film.

Mr. Lerner died in 1973 after a long illness that Dr. Lerner wrote about in “A Death of One’s Own” (1978). Her survivors include a sister, Nora Kronstein; a daughter, Stephanie Lerner; a son, Dan; and four grandchildren.

Dr. Lerner, with great difficulty, found a publisher for “No Farewell” (1955), a novel about the coming of fascism to Austria, but by the late 1950s she faced uncertain prospects as a writer. With thoughts of writing a historical novel, she began researching the lives of Sarah and Angelina Grimké, daughters of a wealthy plantation owner, who traveled throughout the United States proselytizing for the American Anti-Slavery Society.

The novel never materialized, but her research led to a new career. She began taking history courses at the New School for Social Research, where, while still an undergraduate, she taught “Great Women in American History.” It was one of the first courses ever given in the United States on women’s history.

After earning her bachelor’s degree from the New School in 1963, she enrolled at Columbia, her work on the Grimké sisters in hand, to study women’s history. Bending the rules, the university allowed her to complete her master’s and doctorate in three years. In 1967, she published “The Grimké Sisters from South Carolina: Rebels Against Slavery.”

At Sarah Lawrence, where Dr. Lerner began teaching history in 1968, she was the driving force behind what is widely credited as the first graduate program in women’s history in the United States, established in 1972.

In 1980, she joined the history department at Wisconsin-Madison, where she created the university’s doctoral program in women’s history. She retired from Wisconsin in 1991. In 1981, she became the first woman in 50 years to be elected president of the Organization of American Historians. The Lerner-Scott Prize, named in honor of her and Anne Firor Scott, another pioneer in women’s history, has been given annually since 1992 for the best doctoral dissertation on women’s history in the United States.

Dr. Lerner wrote two ambitious studies on women and society: “The Creation of Patriarchy” (1986) and “The Creation of Feminist Consciousness” (1997). Many of her essays were collected in “The Majority Finds Its Past: Placing Women in History” (1979) and “Why History Matters” (1997).

“I want women’s history to be legitimate, to be part of every curriculum on every level,” she wrote in “Living With History/Making Social Change” (2009), a collection of autobiographical essays. “I want people to be able to take Ph.D.’s in the subject and not have to say they are doing something else.”