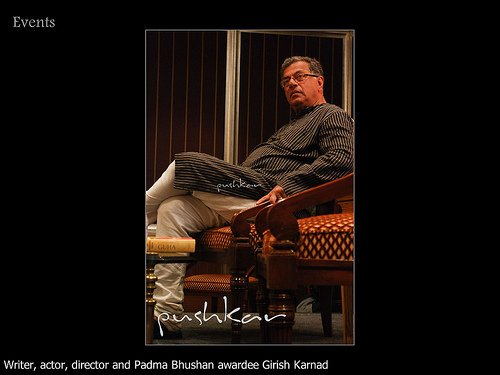 On 5 July, at an event organized for the Chitra Film Society in Dharwad by its secretary, Abdul Khan, I was asked how I reacted to having Modi as the Prime Minister, given that I had criticised him earlier as a dangerous person. I replied that since the BJP had come to power through a perfectly constitutional process one had to accept and respect the verdict of the people. I said one should not be in a hurry to start criticising it, and  added that the fact that there was such uniformity in the voting across the country could be taken as a sign that somehow democracy was working in India.

Next day, the Bangalore edition of  the Times of India carried the report on its  front page, discreetly  consigning  it to a corner although it added that I had expressed approbation of Modi’s government which I had not. But one is used to little  misquotations and  tweakings in Indian journalism. As The Hindu correctly reported it , I had said that ‘it would be too early to say anything about the style of functioning of the Modi government… Let us give him time.’
I was therefore startled to receive angry emails from my friends outside Karnataka accusing me of treachery and selling out. It was only when Teesta Setalvad drew my attention  to it that I realized that other editions of the TOI had in fact projected the story entirely differently, displaying on the  front page my photograph with a saffron teeka on the forehead with a long story inside probably rewritten to match the mood.  I was amazed that the TOI should so openly turn itself into a publicity rag for the Right.
But I was more bothered that my left- wing friends, who had known me for years, should so easily accept what the TOI said about me and start lambasting me with accusations of betrayal. If you wanted evidence of the impact of the media, here it was!.
I do not tweet or use the Facebook since I do not wish to turn my life into an endless response to ignorant comments. Perhaps as you and Teesta have indicated I should, in my untweeting Facebookless isolation, be more sensitive to the anxieties that are gripping the nation, and in particular, the Left.
For the moment I can only assure you that the dirty tricks department of the TOI  is unlikely to affect my political stance.
Girish Karnad by email